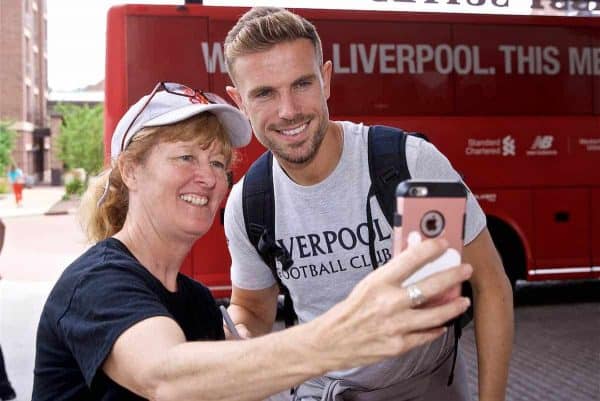 Photos: Liverpool arrive in South Bend for first leg of US tour

Liverpool have landed in the United States for the first leg of their pre-season tour, and Jurgen Klopp and his squad were greeted by fans in South Bend.

The Reds take on Borussia Dortmund in South Bend, before heading to Boston for a clash with Sevilla at the home to FSG, then rounding off the tour by meeting Sporting CP in New York.

After comfortable victories in their opening domestic friendlies, these ties are likely to be a much tougher test for Klopp’s side.

Off the pitch, this tour allows Liverpool to connect with their American support, and Jordan Henderson was among those to pose for selfies with fans at their hotel.

Klopp named a 28-man squad for the trip, also joined by ex-Middlesbrough goalkeeper Andy Lonergan, who will provide an extra body in training this pre-season.

A host of youngsters have been given the opportunity to impress, with Bobby Duncan benefiting in particular, as injury to his strike partner Paul Glatzel increases his chances.

The 19-year-old is due to play a big role for the Reds in 2019/20, but will need to prove himself against top-level opposition, with his only outings so far coming against sides from League One and League Two.

Summer signing Sepp van den Berg is yet to feature, but the 17-year-old is likely to receive international clearance ahead of a possible debut in the US.

One player who could well play every minute is Simon Mignolet, with injuries and absences to other goalkeepers ensuring a focal role for the Belgian this summer.

Mignolet is still pushing for a move away from Liverpool, but he is likely to need to wait until the end of pre-season, when Alisson returns to the fold.

Both Alex Oxlade-Chamberlain and Curtis Jones will be looking to impress in the US, having fallen behind in the Reds’ midfield pecking order last term.

The pair have both caught the eye against Tranmere and Bradford, and continued strong form against Dortmund, Sevilla and Sporting would boost their chances significantly.

Virgil van Dijk is among a host of senior players who could make first pre-season outing across the pond, with Dortmund to come on Friday night in Indiana.

Goalkeeper Andy Lonergan, who is training with the Reds while they’re short of ‘keeper options, must be pinching himself at going from being on loan at Rochdale to touring with the European Champions!