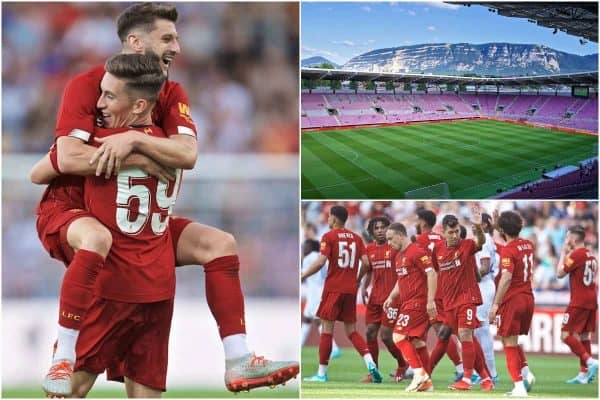 A trip to Geneva saw Liverpool a secure a 3-1 win over Lyon to end a four-game run without a victory, on a night when the whole squad was handed game time.

The Reds made the journey to Switzerland from their training base in Evian, France to partake in their seventh and final pre-season friendly of the summer.

The occasion marked the return of five senior figures to the starting XI as Alisson, Roberto Firmino, Mohamed Salah, Xherdan Shaqiri and Naby Keita were all included and handed at least 30 minutes of action.

Ligue 1 outfit Lyon awaited Jurgen Klopp’s side at a picturesque Stade de Geneve, but it was not the ideal start Alisson was looking for in between the sticks.

An uncharacteristic fumble and subsequent foul allowed Memphis Depay to convert from the spot in what was a wobbly opening 15 minutes for Liverpool.

The Reds soon found their feet, however, and went on to dominate proceedings—paving the way for Firmino to quickly return to his goalscoring ways.

It was a superb turn and finish from a tight angle which saw him level the scores after some brilliant buildup play from Keita and Shaqiri.

A bout of sustained pressure ensured Lyon were now the team on the back foot and the Reds were rewarded for their efforts as Ki-Jana Hoever‘s delivery into the box saw the French side concede an own goal.

The 17-year-old impressed once more in the right-back position after displaying an incredible level of maturity and confidence in his 45-minute outing which helped ensure Liverpool took a 2-1 lead into the break.

Klopp would go on to make a host of changes to his team throughout the second half which would see no player feature for the full 90 minutes.

And Bobby Duncan impressed during his short 15-minute cameo to start the second half, linking up well with Yasser Larouci—on his return to the team after sustaining an injury from a horror tackle in America—before setting up Harry Wilson to seal the game.

The Wales international dispatched a thunderous 25-yard strike into the net, much to his and his team-mates’ delight.

A host of senior faces would then descend onto the field with just under half an hour remaining as a complete change to the XI was ordered.

But it was the Reds’ newest signing Harvey Elliott who caught the eye, with another brief performance full of intent and confidence having been unafraid to throw himself into the contest or unleash an effort on goal.

It proved to be a much-improved performance from Liverpool, individually and as a team, as they showed a level of cohesion which was lacking throughout much of the summer.

Klopp and his team then made their way around the stadium after the final whistle to show their gratitude to the fans who made the journey to Geneva in the final friendly of the summer.

A Community Shield meeting with Man City now awaits on Sunday before Klopp’s side kick off their Premier League campaign against Norwich on August 9.