With Liverpool leading plans for a breakaway Super League, and the backlash being unanimously fierce from fans, Jurgen Klopp already made his feelings clear in 2019.

It was announced on Sunday night that 12 clubs had already agreed to form a new highly lucrative Super League, which would see them break away from the current Champions League in favour of a largely closed setup.

They will be joined by three other founding clubs in securing a permanent place, with those 15 to share a pot of £3.1 billion, also taking the majority of the revenue over the five clubs to qualify each season.

Supporters have strongly opposed the plans, but as of now it appears those involved are set on pushing ahead with the Super League despite the ramifications it could have in terms of supporters.

There are even fears that Klopp could use this outright betrayal as a cause to leave the club, with his comments in a 2019 interview with Kicker making it clear he is not in favour.

“I hope there will never be this Super League,” he told the German publication.

“With the way the Champions League is now running, football has a really great product.

“For me, the Champions League is the Super League in which you don’t always have to play the same teams.

“I also don’t feel like my club has to be seeded.

“Of course, it’s economically important, but why should we create a system where Liverpool can play against Real Madrid for 10 years in a row? Who wants to see this every year?” 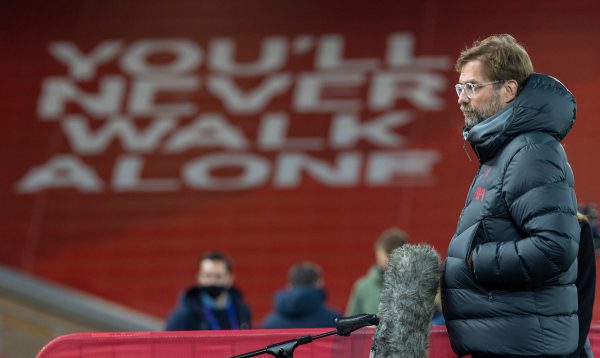 It is a succinct point from the manager, with his emphasis being on the competitive element of the current setup and the diversity of opposition, compared to potentially facing the same ‘super clubs’ each season.

The Super League plans were confirmed on the eve of an expected announcement from UEFA of a new ‘Swiss model’ Champions League, which would expand to 36 teams and branch off into a league format for the group stages.

Klopp is also against that expansion, describing the plans as “absolute bollocks” in 2019.

“Today I read an article that [said] the top clubs want to do more games in the Champions League or whatever,” he told reporters after a 2-0 win over Watford.

“I’m not involved in these plans. That’s absolute bollocks as well.

“We can talk about everything, but we have to cut off games, not put more in.”

Evidently, the manager’s focus is on the increased amount of games for his side, with these fears no doubt further exacerbated during this ridiculous pandemic campaign.

Neither the Super League nor a new-look Champions League seem to be the solution, but the new initiative fuelled by Liverpool’s owners threatens to disenfranchise the entire support – and the manager who has brought them success.