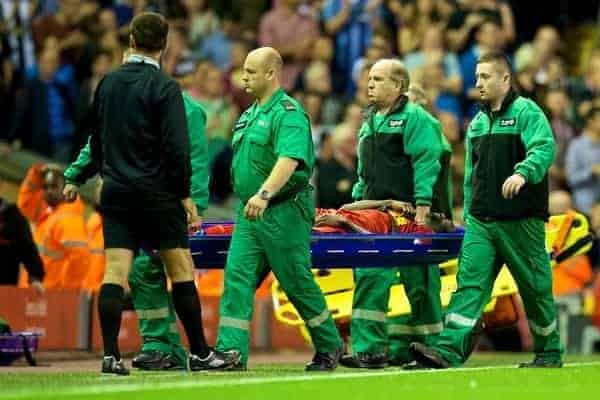 Brendan Rodgers fears an extended period of time out of action for Kolo Toure after the defender was stretchered off during Liverpool’s 4-2 victory over Notts County in the League Cup on Tuesday night. The visitors came back from two goals down to equalise and send the game into extra time, before Daniel Sturridge and Jordan Henderson put the game beyond the League One side.

During the first half of extra time Toure picked up the injury which saw him leave the pitch on a stretcher in a lot of discomfort. He was later seen leaving Anfield on crutches.

After the game Rodgers gave his initial verdict on the Ivorian international’s problem. He told press, “Kolo Toure, we need to assess it. His groin opened up a wee bit. He overstretched his groin and it doesn’t look so good, to be honest.”

Rodgers may now face a selection headache in central defence should Toure be out of action. With this Sunday’s Premier League clash at home to Manchester Utd now on the minds of the Reds, it is expected that Slovakian international Martin Skrtel will return to partner Daniel Agger.

Rodgers added, “Cissokho was devastated. He shouldn’t be too long. He’s got a knock in his ankle. He was distraught to come off in his first start here.

“Joe Allen may well be a hamstring so we’ll have a look at that. We’ll know more in the morning but it wasn’t a good night injury-wise.”

Rodgers was confident, however, that despite injuries and the extra half hour of football on Tuesday night, the team have plenty of recovery time and will go into Sunday’s game at home to United full of confidence.

He added, “We’ve got plenty of recovery time now for the players. That was the idea – that I could put some of the senior guys in knowing there was enough recuperation period after the game, and obviously to give our young players good experience playing in a competitive game. Young Jordon Ibe is 17, Raheem 18 and Andre Wisdom 20 years of age.

“They’ll all be fine, they’ll recover well and we’ll be excited now looking forward to that game on Sunday.”