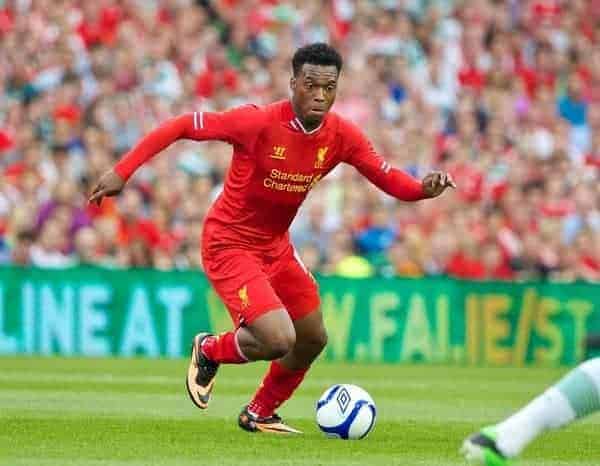 Daniel Sturridge says he is feeling ready to start the new Premier League season for Liverpool after recovering from injury.

Sturridge only began full-time training with the Reds squad last week after spending the summer in rehabilitation following an ankle injury picked up on international duty with England in May.

Sturridge came on at half-time in Liverpool’s 1-0 defeat to Celtic in Dublin on Saturday and certainly looked sharp in front of goal, reigniting his partnership in attack with Philippe Coutinho.

Now a relieved Sturridge says he can’t wait to get back to playing every week.

“I’m delighted to be back,” he told the club’s official television channel, LFC TV. “I want to say thanks to the physio, Matt [Konopinski], and the fitness coach, Jordan [Milsom], for all the hard work they’ve done with me.

“It’s been a long road – a bumpy one at that – but I’m delighted to be back out there and I’m thankful to God for healing my injury so quickly because I wasn’t sure I’d be back for the start of the season.

“I’m fit and good to go. If I’m selected against Stoke then I’ll be ready. I didn’t think I’d be as sharp as I was, to be honest, so I’m happy! I would have loved to have scored and marked my return with a goal, but the important thing was to leave the pitch healthy with no injury or anything.”

Liverpool’s defeat to the hands of Celtic was only their first defeat of their summer pre-season schedule, having won every other match.
But, despite the result, Sturridge’s return delighted manager Brendan Rodgers.

“I thought he was excellent,” the Liverpool boss told press after the game at the Aviva Stadium.

“You saw the difference when he came on in the second half – that power and pace, and his link-up play with Coutinho was great.

“He’s working really hard to get fit and he’s looked really strong in training this week.

“He got 45 minutes today and we’ve got a behind-closed-doors game in the early part of the week. We can assess him after that but he looked really good.”

Some of the squad now go to their international squads for a round of friendly matches, before the league season gets underway next Saturday, August 17th.

Liverpool kick off the new season with a visit from Stoke City at 12.45pm. The match is live on BT Sport.