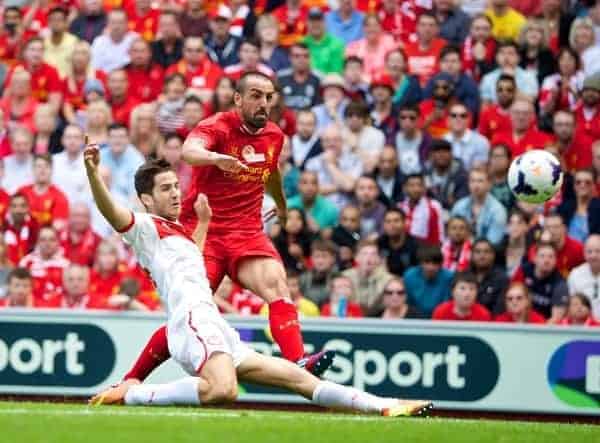 Liverpool left-back Jose Enrique says it is only right that the club are seeking to bring in a new player in his position. Two weeks ago, manager Brendan Rodgers confirmed that he is hoping to bring in a new left-back to the club, to provide competition in that area of the squad.

Enrique is currently the only recognised left-back in the squad following youngster Jack Robinson’s departure to Blackpool on loan last week.

The Reds have been linked with a number of left-back, including Valencia’s Aly Cissokho and Benfica’s Lorenzo Melgarejo.

Whilst the new signing would put Enrique’s place in Liverpool’s first team at risk, the Spaniard is welcoming the competition.

“Of course, you need two players in every position,” he told the club’s official website.

“If I was injured last year we were playing Glen Johnson on the left. We know Glen, he can play anywhere, but you need two players for any position. He will be more than welcome.”

Enrique also said he is hoping to continue his development this season into the more attacking full-back Rodgers wants him to become.
He added, “The type of football he wants to play takes time to use.

“It’s important to have a manager who wants to do something new. He did last year so hopefully this year we’ll improve.

“We said last year that hopefully we can fight for the top four. Here in the Premier League it is really difficult; it is the most difficult league in the world. Hopefully we can be there – we will fight until the end.”

Enrique was signed from Newcastle Utd two summers ago and has so far made 78 appearances for the Reds, scoring twice.

Liverpool have two pre-season games left to play before the new league campaign gets underway.

They face Norwegian side Valerenga on Wednesday night, before meeting Celtic in Dublin on Saturday.

They kick off the new Premier League season at home to Stoke City at 12.45pm on Saturday, August 17th.

All three games are live on BT Sport in the UK.