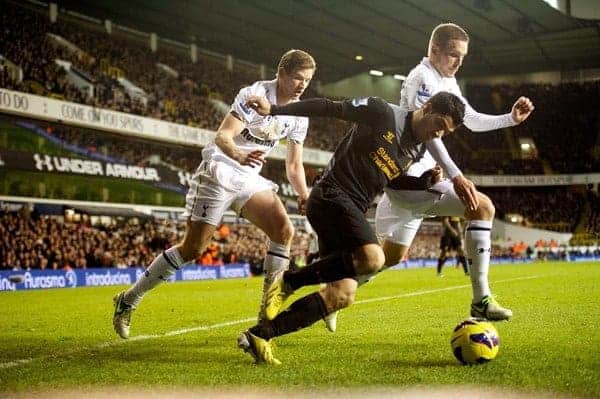 The Reds visit Spurs on Sunday, hoping to pick up all three points there for the first time since 11th May 2008. Henry Jackson (@OnFootballTweet) looks back at Liverpool’s five frustrating Premier League defeats at White Hart Lane since that day. The home side got off to a flying start thanks to early goals from Aaron Lennon and the in-form Gareth Bale, and Brendan Rodgers’ side never really recovered.

The visitors did at least grow into the game, and Bale’s unfortunate own goal in the 72nd minute gave them hope, but they never really kicked on enough to merit earning a point on the day.

This was one of Liverpool’s most depressing away days for a number of years, as Kenny Dalglish and his side were completely outplayed by Spurs.

They battled bravely until midway throughout the second half, when Martin Skrtel’s red card saw Liverpool reduced to nine men. Quickfire goals from Jermain Defoe and Emmanuel Adebayor put the game to bed, before the former Arsenal man added another. With Roy Hodgson right in the middle of his disastrous time in the charge at Anfield, his side suffered more White Hart Lane heartbreak back in 2010.

A tight opening 45 minutes ended well for the Reds, however, with Skrtel poking home from close range to give the Reds the lead at the break.

Defoe missed a penalty, but Skrtel then agonisingly turned the ball into his own net. With the game poised for a share of the spoils, Lennon broke free to score an injury time winner and send Liverpool fans away distraught.

After a terrific campaign in 2008/09, when Liverpool nearly won their first Premier League title, many were tipping Rafa Benitez’s side to mount a serious challenge again. This opening-day defeat was the worst possible start.

On the stroke of half-time, Benoit Assou-Ekotto rifled an unstoppable free-kick into the top corner, giving the Reds an uphill battle in the second half.

Steven Gerrard equalised from the penalty spot in the 56th minute, after Glen Johnson was fouled by Huerelho Gomes, but the joy was short-lived. Sebastien Bassong powered in a header just three minutes later, and that’s how the scoreline remained. Liverpool have lost 2-1 in four of their last five Premier League visits to White Hart Lane, and this was the most unjust.

Benitez’s side were on fire at the time, whereas Spurs were bottom of the table going into the game, and the match started with the Reds playing some superb stuff. They took the lead in the 3rd minute, after Dirk Kuyt fired in from an acute angle, and were all over the hosts for the remainder of the half.

Liverpool couldn’t kill the game off, however, and Jamie Carragher’s own goal levelled matters with 20 minutes to go. There was still time for more late misery, as Roman Pavlyuchenko found the net in stoppage time to halt the Reds’ title challenge.

Do you think Liverpool will end their White Hart Lant jinx on Saturday? Or do you expect more disappointment?