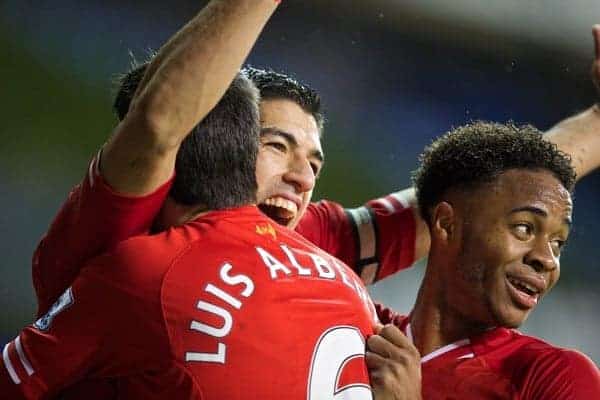 Liverpool fans have reacted to Sunday’s 5-0 demolition of Tottenham Hotspur in the Premier League at White Hart Lane. First half goals from Luis Suarez and Jordan Henderson gave Brendan Rodgers’ men a comfortable half-time lead, before a late flurry of goals from Jon Flanagan, another from Suarez and finally Raheem Sterling added insult to injury for Andre Villas-Boas’ men.

It was a near-perfect performance from the Reds, who took maximum points in the first of a tricky run of fixtures that will see them visit both Manchester City and Chelsea by the end of the month.

Liverpool can go top of the Premier League with a win over Cardiff City at Anfield next Saturday lunch time.

After Sunday’s epic victory in North London, a number of Liverpool players tweeted their delight:

A great victory at White Hart Lane. Happy for the team and myself.Very happy for my first assist. Hopefully the first of many for LFC. ?????

Good result today by the team! ??

Great result. Not many teams will do them at White Hart Lane. #TotalSoccer

Whilst Liverpool fans shared their joy at going back to second in the league table and ending the White Hart Lane hoodoo.

20 goals a season was a benchmark for a striker but Suarez is on course to do that before the half way mark AND after missing 1st 5 games!!!

It will sound knee jerk, but I do think we can be in contention for the title this season, we are contenders on that performance. #LFC.

Is it me or does Hdnderson grow in stature whenever Gerrard is absent? Bossed midfield today and looked like a future leader

Best result since 1-4 Man United away?

Simply sensational reds. Well done every one of you. That is a real marker as to our expectations #LFC

Amazing day in the capital. Best display of Rodgers' reign by some distance. Spurs were awful but Liverpool made them look poor. Relentless

For my money Liverpool's performance against Spurs is the best I've seen from a team anywhere in Europe this season. Just brilliant.

My favourite stat from the one match report I've seen: Liverpool have scored more open play goals at WHL than Spurs this season. Hahahaha!

And in response to Andy Murray winning the BBC’s Sports Personality of the Year award in Leeds on Sunday night: