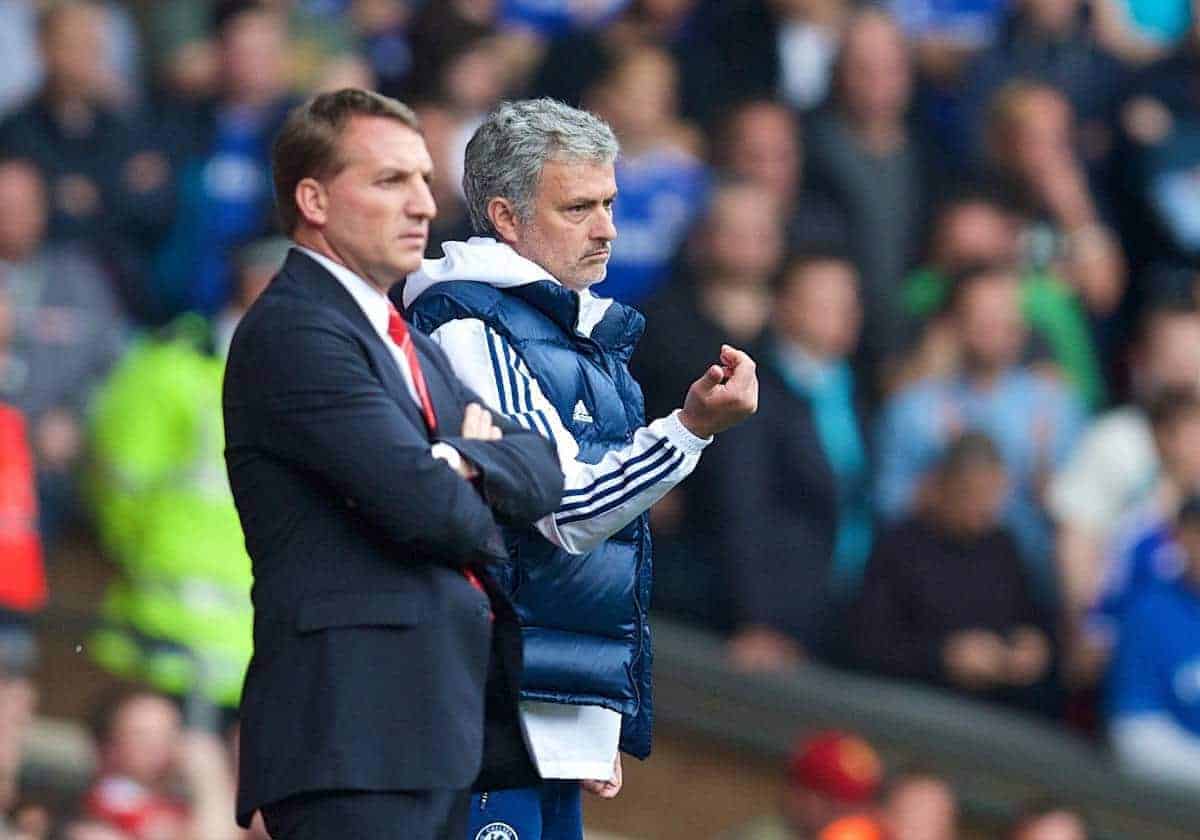 Did Jose Mourinho teach Brendan Rodgers the harshest of football lessons on Sunday? Or did Chelsea win merely due to two Liverpool mistakes? Neale Graham thinks it’s the former of the two. Two points clear with two games to go. Who wouldn’t have taken this scenario if offered to them last August?

But here and now, a day after one of the most horrible 90 minutes of football I’ve ever sat through, it really should be four points clear with two games to go, and here’s why.

Jose Mourinho has been getting plenty of begrudging praise from the media for the job he did on us on Sunday. It’s hard to argue with the result. And while it’s how he went about achieving it that will divide opinion, I don’t think there is a Liverpool fan alive who wouldn’t have taken a grubby 2-0 win yesterday – or, more to the point, a bore draw.

Brendan Rodgers was pointing out the obvious when he claimed Chelsea parked a pair of buses. It was also obvious before the game Mourinho was going to fight fire with the biggest bucket of water seen all season. So the question is why, when Mourinho’s tactics were so blatant before kick off, did Rodgers fall for the trap?

Call it a sign of how far we’ve come that Mourinho didn’t contemplate setting up to dominate the game as he has done in Anfield league meetings past. But this was not a game we needed to win, this was a game we needed to emerge from unscathed, moral high ground or not. Eleven wins on the bounce didn’t need to become 12, yet that was all we were focused on from minute one. It was attack versus defence, as it was always likely to be, when in reality we could afford to draw and still come away victors.

Rather than play into Mourinho’s hands, this was an opportunity for Rodgers to show he can be pragmatic. He’s already demonstrated flexibility in his approach and tactics this season, shifting formations frequently, shuffling personnel, and moving the gameplan away from the sterile possession of his Swansea and early Reds career.

What was needed yesterday was an acceptance that sometimes caution can be OK, that we will take a draw when one will do. And after 24 years, one would have done on Sunday. We played the occasion, not the opposition, when giving them the ball and making them force the issue would have presented Mourinho with a different sort of problem to solve rather than the one he’s so adept at.

Sure, there’s no legislating for the Gerrard slip, and Chelsea would have had to come out and played more adventurously as a goalless game progressed. But there’s a nagging sense that it wasn’t luck that deserted us, or their stifling defence, or their time wasting, or anything other than Rodgers being taught the harshest of football lessons from the harshest of football teachers.

Alex Ferguson found ways to win above and beyond playing attacking football; Arsene Wenger rarely has. Rodgers, you’d say, is more Wenger than Ferguson at this stage of his career, but if he learns from yesterday we will have ourselves a coach for all eventualities. When the Champions League kicks off again in September we will need more than one way to win, or draw, as the case may be. It’s a challenge I expect Rodgers to rise to.

For now, though, COME ON EVERTON!