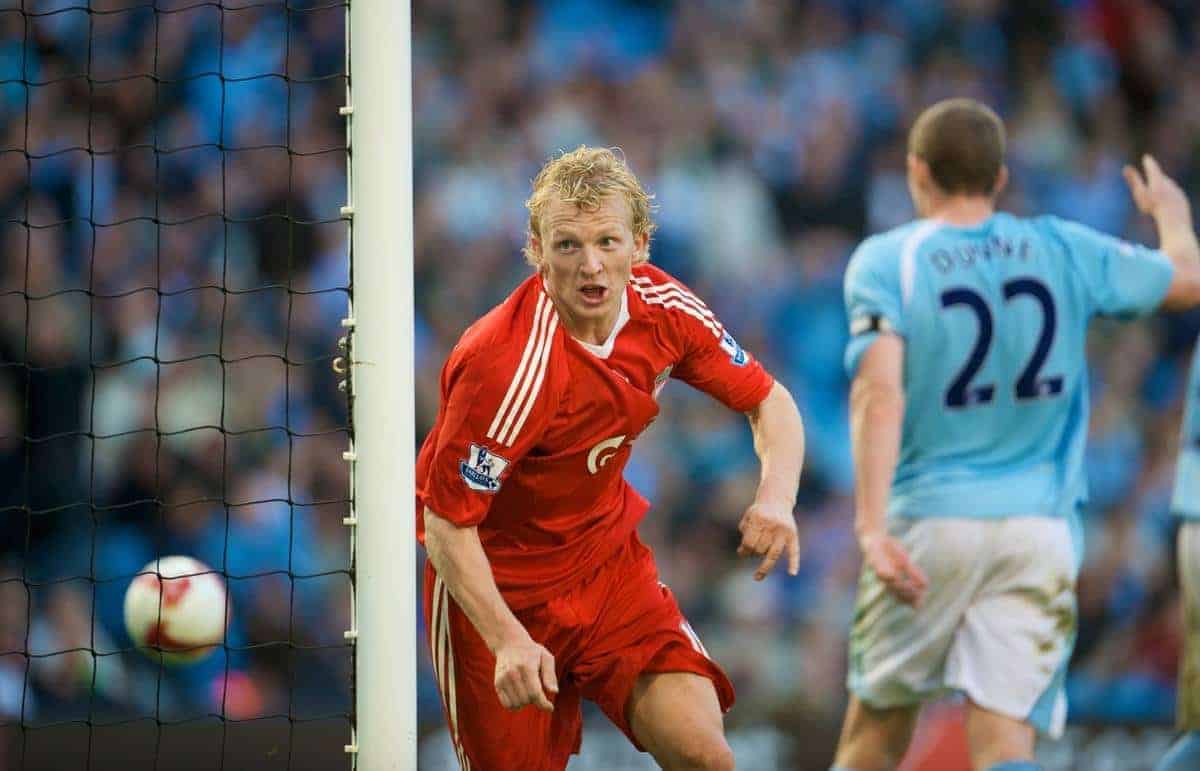 The Reds face Manuel Pellegrini’s side at Anfield on Sunday in what is arguably the most important Premier League game in Liverpool’s history. Henry Jackson (@OnFootballTweet) looks at five memorable wins for Liverpool over City in recent years.

This Carling Cup semi-final first-leg clash at the Etihad was very important for Liverpool, as they were on the cusp of winning their first piece of silverware for almost six years.

City were on their way to their first ever Premier League title, and were a fearsome side on their day.

Kenny Dalglish‘s team produced a gutsy, disciplined performance, and Steven Gerrard’s early penalty, given after Daniel Agger was fouled by Stefan Savic, proved to be the difference between the two sides.

In the return fixture at Anfield, a 2-2 draw was enough to see Liverpool progress to the final, where they beat Cardiff City on penalties.

The 2008/09 campaign was an exceptional one from Rafa Benitez’s side, and this superb comeback epitomised the belief and quality in Liverpool’s squad that season.

After going 2-0 down to first-half goals from Stephen Ireland and Javier Garrido, the game turned on its head after the break.

Fernando Torres pulled a goal back after 55 minutes, before Pablo Zabaleta was sent-off after a shocking challenge on Xabi Alonso. Torres levelled the scores with 17 minutes remaining, and it was left for Dirk Kuyt, the man for the big occasion, to fire home a last-gasp winner from close-range.

This was a very important win for Liverpool back during the 2003/04 season, and the three points helped hugely in their quest for a top four finish. Former Anfield heroes Robbie Fowler and Steve McManaman were in the City lineup on the day.

Michael Owen scored early- his first goal in over three months- to put the Reds 1-0 up, and it stayed that way until the break.

The second-half got off to a bad start for Gerard Houllier’s side, as Shaun Wright-Phillips finished well to bring the scores level. Just a minute later, however, Gerrard was on hand to scramble the ball home, after Owen had been denied by another former Red, David James.

Liverpool hung on, and would go onto to qualify for the 2004/05 Champions League. The rest, as they say, is history.

The 2000/01 season was a glorious one for Liverpool, with a top four finish and three cup triumphs all achieved by Houllier and his team. This fifth round FA Cup win over Joe Royle’s City side was another big step towards glory.

Just as it looked as though the Reds were coasting, former Manchester United and Everton winger Andrei Kanchelskis pulled a goal back for City before the interval.

The nerves were eased shortly after half-time, however, as Smicer was again fouled inside the box by Weaver. This time the Czech Republic star took, and scored, the penalty himself.

Markus Babbel added a fourth, before Shaun Goater’s late consolation made it 4-2, and Liverpool were through to the quarter-finals.

Earlier in that same 00/01 campaign, Liverpool again got the better of City in a hugely entertaining Premier League clash at Anfield.

Owen scored his seventh goal in just four games to put the Reds ahead, following good work by Heskey, and that’s how the scoreline stayed until the break.

Didi Hamann produced a magnificent volleyed effort to make it 2-0 after 56 minutes, in what was a rare goal for the dependable German, before George Weah pulled a goal back for the visitors.

Kevin Horlock stunned Anfield with an equaliser with just nine minutes remaining, but Hamann, an unlikely hero on the day, was on hand to fire home the winning goal.

Paulo Wanchope had an effort ruled out for a foul on Sander Westerveld, and Houllier’s men saw the game out to earn all three points.