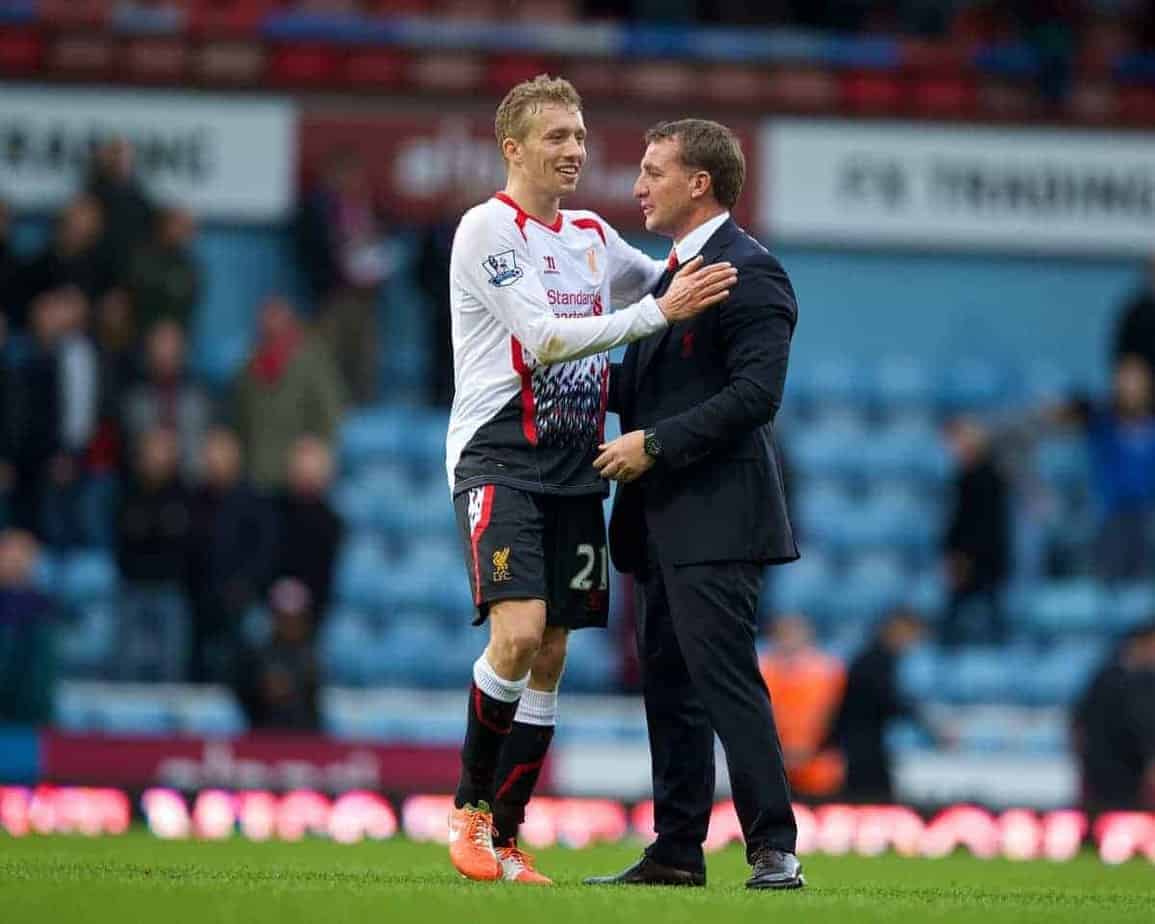 The inclusion of Lucas Leiva against Southampton on Sunday was a rare tactical mistake by Brendan Rodgers, writes Jack Lusby.

In the build-up to Sunday’s 2-1 home victory over Southampton, the most surprising fixture in Brendan Rodgers’ first Premier League starting lineup of 2014/15 was one Lucas Leiva.

The Brazilian is believed by many to be on his way out of the Merseyside club, and featured sparingly throughout pre-season.

Nevertheless, Rodgers opted for the midfielder, who replaced Emre Can at half time against Borussia Dortmund the week before.

This was a tactical risk that didn’t quite pay off, with Lucas fairly ineffective throughout; poised at 1-1 on his departure, the Reds eventually won the tie after changing to two up front.

Including the 27-year-old former stalwart was a surprise move by Rodgers, one which was likely weighed up precisely, however this tactical decision proved to be a rare mistake by the Liverpool manager.

The criticism of tactical inadequacy is not one which could land at the feet of Rodgers; throughout his tenure as Liverpool manager the Ulsterman has proved himself one of the Premier League’s most malleable, intelligent tacticians.

Against Southampton, Rodgers opted for the same formation as the final pre-season game against Dortmund: a 4-2-3-1 formation.

In order to most adeptly utilise the plethora of attacking midfield options now available to him, the 4-2-3-1 allows Raheem Sterling, Philippe Coutinho and Jordan Henderson the advanced positions they so thrive in.

When Lazar Markovic and Adam Lallana return from injury, this tactical layout will accommodate their talents also.

In order to balance this attacking thrust, a two-strong midfield base is deployed.

Steven Gerrard is now the de facto deep-lying midfielder in this Liverpool squad, and throughout this season it is likely that—so long as the 4-2-3-1 prevails—the Englishman will be paired with one of several options.

Alongside Gerrard, Lucas formed the base of the midfield against Southampton, tasked with breaking up play and moving possession along.

Glen Johnson and Lucas Leiva didn't win a single tackle between them for Liverpool against Southampton today. #LFC

The fact that the 27-year-old failed to make a single tackle throughout his 63 minutes on the pitch is alarming, given the role occupied.

This was imperative given the dominance the Saints had in the central roles, with Victor Wanyama and Morgan Schneiderlin impressive as Ronald Koeman’s respective midfield pivot.

Furthermore, James Ward-Prowse was provided the luxury of an unchallenged midfield battle consistently, and the delivery the young Englishman possesses proved devastating.

Most disappointingly, it was Lucas that was ultimately culpable for Nathaniel Clyne’s equalising goal—failing to track the former Crystal Palace right-back into a dangerous position in the Reds’ box.

Hauled off just beyond the hour mark, it seemed a bizarre tactical decision to start Lucas in the midfield.

Furthermore, Lucas’ inclusion in the starting line-up on Sunday was a huge surprise given the quality and depth of midfield options on the substitutes’ bench.

Namely, these options were new signing Emre Can and Welsh midfielder Joe Allen.

The former was employed generously during pre-season, and impressed thoroughly; in fact, Can was one of Liverpool’s most consistent performers on their tour of the USA.

It is understandable, however, why Rodgers opted to sideline the 20-year-old, given the way in which he struggled to get to grips with the frenetic pace with which the Reds played against Dortmund.

Can will become an integral figure under Rodgers, but will be slowly introduced.

Joe Allen has made a difference for Liverpool, darting forward with the ball and passing more constructively than Lucas.

The stand-out replacement for an ailing Lucas at this juncture is Allen, who contributed hugely in turning the game around against Southampton.

Introducing Allen at Anfield was a canny move by Rodgers, but one which should have been in place from the first whistle.

A Series of Unfortunate Events

This is, overall, the underlining of a disappointing downturn in fortunes for the Brazilian, who once rose from pariah to key figure at Anfield.

The descent is remarkable, and it is arguably not the midfielder’s doing.

Firstly, it is clear that this poor form and quality began following a series of serious injury lay-offs; an anterior cruciate ligament injury in 2011 proving the initial nail in the coffin.

A shout for http://t.co/WZL6uK7a2L A look at Lucas' tackling, interception & foul stats over the last 6 years. Noticeable change post ACL.

It is clear that Lucas has lost more than a yard of pace, and this is hugely detrimental.

Lucas’ performance against Southampton outlined why the pair can no longer be deployed in tandem—a lack of mobility between the Brazilian and Gerrard depletes the overall effect of Rodgers’ fast-moving system.

As Liverpool captain, and still a hugely important player, Gerrard will endure.

The same cannot be said of the unfortunate Lucas, and this failure in the Reds’ Premier League opener should alert Rodgers to a rare tactical mistake.

Did Brendan Rodgers make a mistake by selecting Lucas Leiva? Let us know in the comments below.