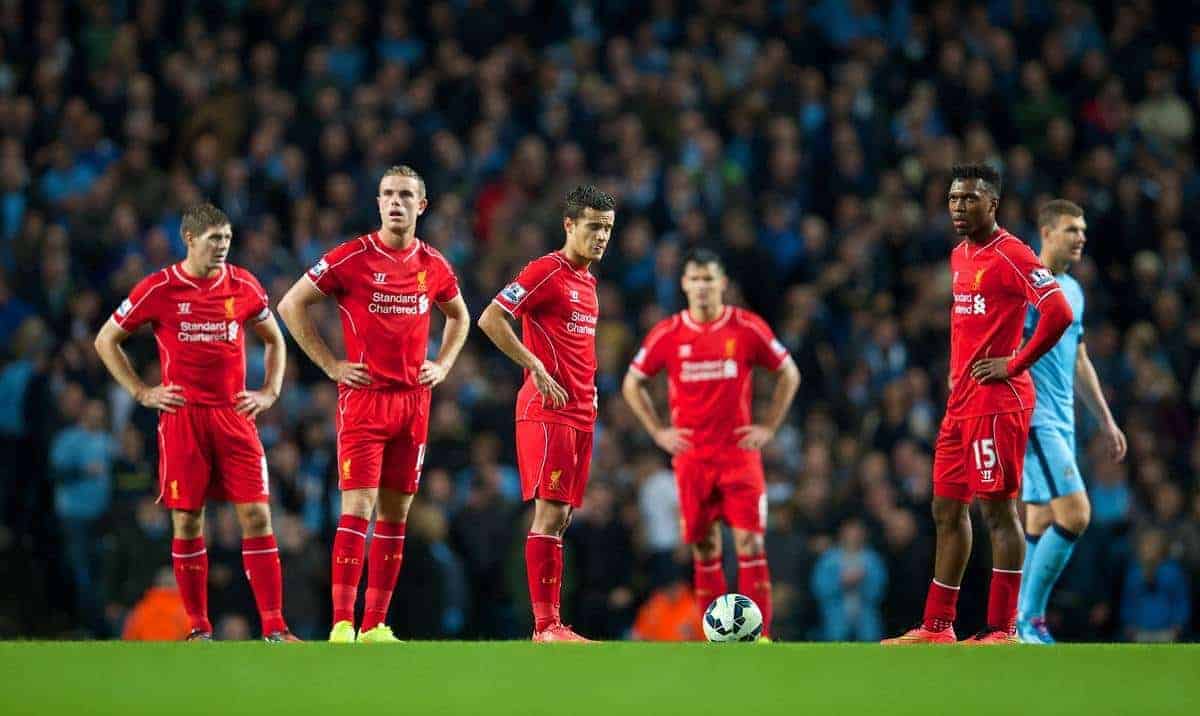 Defensive errors continued to be Liverpool’s Achilles heel once again, as despite a dominant first-half performance they succumbed to a disappointing 3-0 defeat to champions Manchester City at the Etihad Stadium on Monday.

Reds boss Brendan Rodgers made two changes to the side that beat Southampton 2-1 at Anfield last Sunday, with Joe Allen replacing Lucas Leiva in midfield and debutant Alberto Moreno coming in for Javier Manquillo. Glen Johnson switched to right-back, with the 22-year-old Spaniard on the left.

The news of Mario Balotelli’s signing from AC Milan was announced prior to the match, with the Italian forward watching his new team face his former employers from the stands.

The game started evenly, with Edin Dzeko’s scuffed shot in the eighth minute the first effort of note. Raheem Sterling then latched onto a superb Steven Gerrard pass but failed to connect properly with his shot, while Pablo Zabaleta volleyed over for City.

As the first-half progressed Liverpool grew in confidence, with Sterling looking particularly sharp and Allen making a difference in midfield. Rodgers’ side were pressing excellently, nullifying the champions in their own backyard.

Daniel Sturridge tested Joe Hart with a stinging strike from close-range after 32 minutes, as the Reds continued to impress hugely. The only thing missing from their game was an end product.

Their dominance was to no avail, however, as City took an undeserved lead just before the break. Moreno reacted slowly inside the penalty area, and Stefan Jovetic pounced to fire past Simon Mignolet and give Manuel Pellegrini’s men the lead. It was bitter blow after such a promising first-half performance, and once again showed that one mistake against the top teams can be fatal.

There were no changes at the break, with Rodgers sending his players out early ahead of the restart. Sturridge had an early goal ruled out for offside, and it proved to be the correct decision. Moreno then made a vital interception with Edin Dzeko clean through on goal.

In the 55th minute City doubled their lead, and it was Jovetic again who scored. The Serbia international produced a lovely flick to start the move, and he raced onto Samir Nasri’s squared pass to fire past Glen Johnson on the line. The hosts were rampant by this point, and there appeared no way back for Liverpool.

The introduction of Lazar Markovic in place of the disappointing Coutinho gave the Reds an extra edge, but the minutes continued to ebb away. Sturridge twice had chances to reduce the deficit, but he failed to convert both.

Minutes later and the game was well and truly put to bed. Dejan Lovren failed to track substitute Sergio Aguero, and the striker finished clinically with his first touch of the ball. It was game over, and there were serious question marks over Liverpool’s defending yet again.

The travelling fans did at least have something to shout about, as Zabaleta turned the ball into own net, after Hart had initially saved substitute Rickie Lambert’s header, with eight minutes remaining.

It proved to be merely a consolation, however, and Liverpool’s first defeat of the season was complete. Improvement in certain areas are most definitely needed ahead of Sunday’s trip to Tottenham.

Injuries to Glen Johnson and Alberto Moreno in the closing stages added to Liverpool’s woes.

Man of the Match:Joe Allen

Rodgers opted for his preferred 4-3-3 formation, with Coutinho and Sterling supporting Sturridge in attack, and Allen adding running and creativity in the middle of the park in place of Lucas.

While the Welshman was impressive all evening, Liverpool’s defending was once again called into question. All of City’s goals were avoidable, whether it be through poor marking or simple lapses in concentration. Moreno looked good going forward but nervy at the back, while Glen Johnson offered nothing yet again.