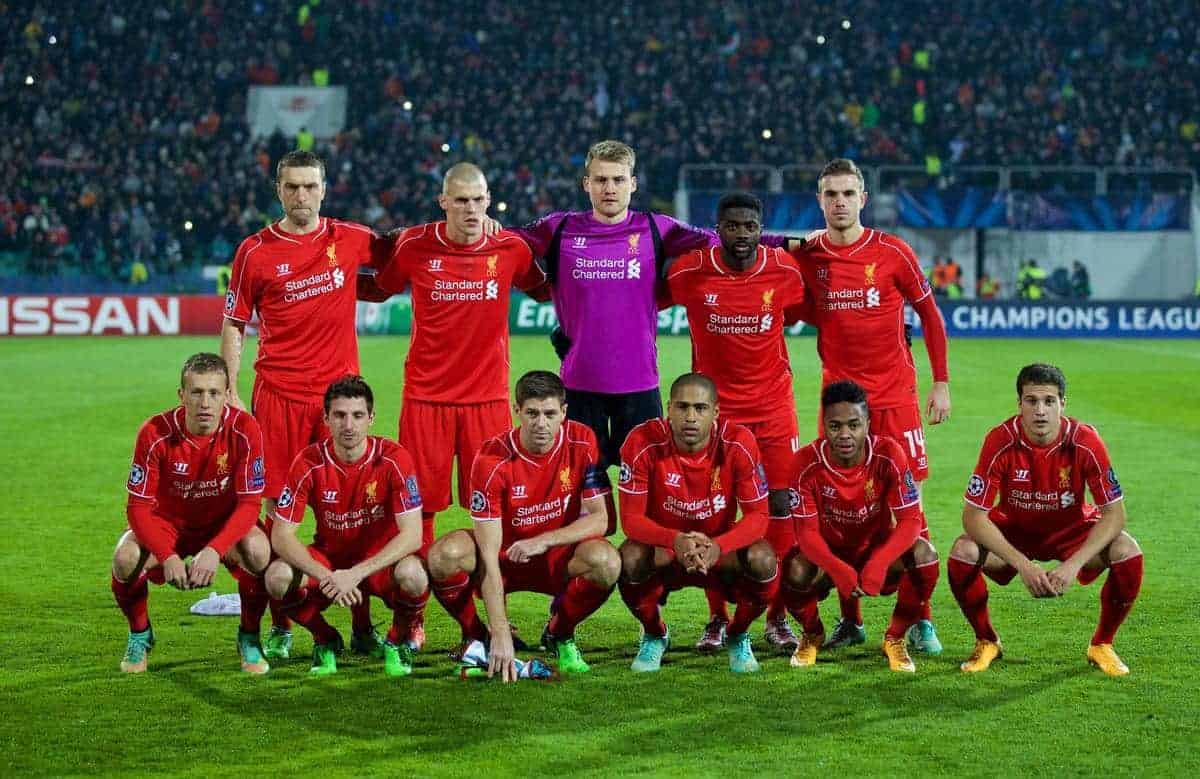 Brendan Rodgers’ Liverpool play their third match in a week on Saturday when they host Stoke City at Anfield – a game in which the manager will need to introduce some fresh legs to his side. Ben Twelves takes a look at the potential selection options available. Liverpool return to action at Anfield having successfully avoiding a fifth straight defeat to claim a draw in Bulgaria on Wednesday night – a result that keeps Champions League qualification in The Reds’ own hands for a huge final shoot-out game against Basel in two weeks’ time.

Before that win-or-bust fixture however, Rodgers’ side have the small matter of trying to rectify their woeful form in the Premier League so far this season, with three winnable matches beginning with Stoke at the weekend, and with Liverpool now trailing the fourth place by five points as a gap begins to open up, it really is a crunch week ahead for the domestic campaign.

BR: We were competitive the other night, worked well, and now we want to take this into the Premier League against Stoke.

The Reds reached their lowest point in the dreadful defeat against Crystal Palace last Sunday, but an improved performance in midweek has given the team something to build on ahead of the clash against Mark Hughes’ illness-stricken side, who will be looking to bounce back from a miserable 2-1 home defeat to Burnley last Saturday.

With the game against The Potters being the third in a week for Liverpool, Rodgers will have to once again make changes to his team and the Reds boss must be brave and make the key decisions for Saturday’s line up to put an end to the detrimental effect that some of his team selections have had on performances and results this season.

Rodgers opted for a more compact and workman like side in Bulgaria on Wednesday but with Liverpool needing to operate on the front foot in the next three games in order to get results, the manager has to make positive changes to his side. BR: Simon Mignolet is fine, we’ve had a good chat today. We paid a lot for him, and he’s saved before. We all need to be better collectively

Simon Mignolet’s position in the Liverpool goal comes under increasing scrutiny following another error and poor all round performance, but with Brad Jones as the alternative, it really is about finding the lesser of two evils.

Dejan Lovren’s long overdue removal from the team finally happened, and while his replacement Kolo Toure was involved in a catalogue of errors leading up to the first goal conceded in midweek, he should keep his place in the back four with Mamadou Sakho unlikely to feature, but this time it could be the turn of Martin Skrtel to make way with the Slovakian’s form becoming an increasing concern.

Glen Johnson produced another uninspiring performance at left back, and Alberto Moreno, who for reasons unknown didn’t reclaim his place in the side in Sofia, must return to the starting team on Saturday. With Rodgers’ persistence with the England full-back, it could be that Javi Manquillo drops to the bench to accommodate his fellow Spaniard.

Rodgers: Glen Johnson can play either side. We always pick the best team to win the game. #LFC

In midfield, despite struggling in a two man centre in the 2-2 draw, Lucas Leiva should retain his place as should goal scorer Jordan Henderson, but Joe Allen’s flurry of involvement could result in Emre Can returning to the starting team with Philippe Coutinho and Adam Lallana also options to come in.

The snail-paced Liverpool attack on Wednesday night cannot afford to remain for Saturday’s fixture and with Coutinho, Lallana and Fabio Borini all ready and waiting, there is absolutely no excuse for Rodgers not to drop the captain and provide more mobility and pace around Rickie Lambert who deserves to keep his shirt having notched two goals in four days.

BR: When Rickie has rhythm in games, he’ll get goals. He wants to do well for the team — his hold up play was great against Ludogorets.

There is a number of selection options available to Rodgers and the Liverpool manager cannot afford to ignore the big decisions this time around. That means Gerrard must make way to the bench to allow for a pacey attacking midfield to be deployed to help Liverpool’s number nine.

This is how Rodgers’ side should therefore look come Saturday 3pm:

Another option for Rodgers would be to play a 4-3-3 system and have his side lining up something like this:

However, I expect Rodgers to once again stick with an intended 4-2-3-1 shape, which was turned more into a 4-4-1-1 on Wednesday night, with The Reds looking like this:

It was far from an impressive display on Wednesday night in the Bulgarian capital, but it was a performance that can be and must be built upon if Rodgers and his players want to transform their fortunes in the Premier League.

BR: Hopefully we can find the rhythm and momentum that gets us results to push us back up there where we want to be.

It won’t be an easy fixture against a physical but tricky Stoke side though, and Liverpool will have to improve another level again if they want to come out of the game with maximum points ahead of two more tough but winnable fixtures.