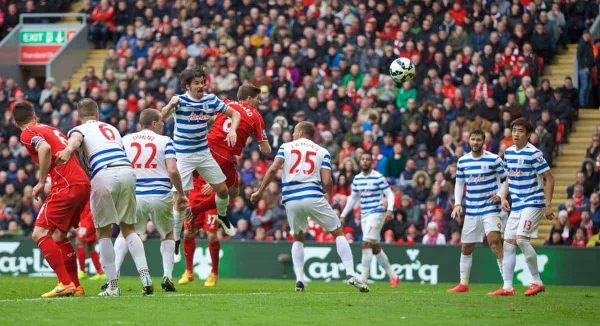 Liverpool won 2-1 against QPR at Anfield on Saturday, with Steven Gerrard’s 87th-minute header making up for his earlier penalty miss.

There were three changes from the side that lost 1-0 to Hull City on Tuesday evening, as Liverpool looked to bounce back from a dreadful run of form.

Rodgers once again went with a 4-3-3 formation, with Emre Can at right-back, Glen Johnson at left-back and Lallana and Raheem Sterling supporting Lambert in attack.

Leroy Fer bundled the ball in after just a minute of play, but Matt Phillips’ corner had already gone out of play. Steven Caulker volleyed wide soon after.

Fer forced Simon Mignolet into a decent save in the 10th minute, as the visitors enjoyed an impressive start to the game.

Gerrard had the Reds’ first shot on goal, but dragged his 25-yard strike wide of the target. Lambert then fired straight at Rob Green.

Liverpool were ahead after 18 minutes. A fluent counter-attack involving Sterling and Lambert eventually led to Coutinho curling a beautiful finish past Green from 12 yards out.

Sterling had the ball in the net 13 minutes before half-time, but the 20-year-old was correctly deemed to have been in an offside position.

Green produced an excellent stop from Gerrard’s free-kick, and it proved to be last action of the first-half. Liverpool deserved their lead.

The impressive Lallana missed a glorious opportunity to make it 2-0 shortly after the restart, but his shot went wide of the Kop goal.

Sterling then somehow missed an even better chance with the goal gaping, as his disappointing run of form continues. The game died a bit of a death around the three-quarter mark, with few chances being created at either end.

Jordon Ibe replaced Lallana in the 68th minute, and shortly after Dejan Lovren was thwarted by the impressive Green.

With 17 minutes remaining, QPR were level. Fer volleyed home Joey Barton’s corner, but once again there were question marks against Liverpool’s set-piece defending.

The Reds were awarded a penalty after 78 minutes, after Nedum Onuoha’s foul on Martin Skrtel, but Gerrard’s spot-kick was saved by Green.

Onuoha received a second yellow card for hauling down Ibe late on, and minutes later Gerrard made amends for his penalty miss.

The 34-year-old glanced a terrific header past Green with just three minutes remaining, and it proved to be the winner in his penultimate Anfield game.