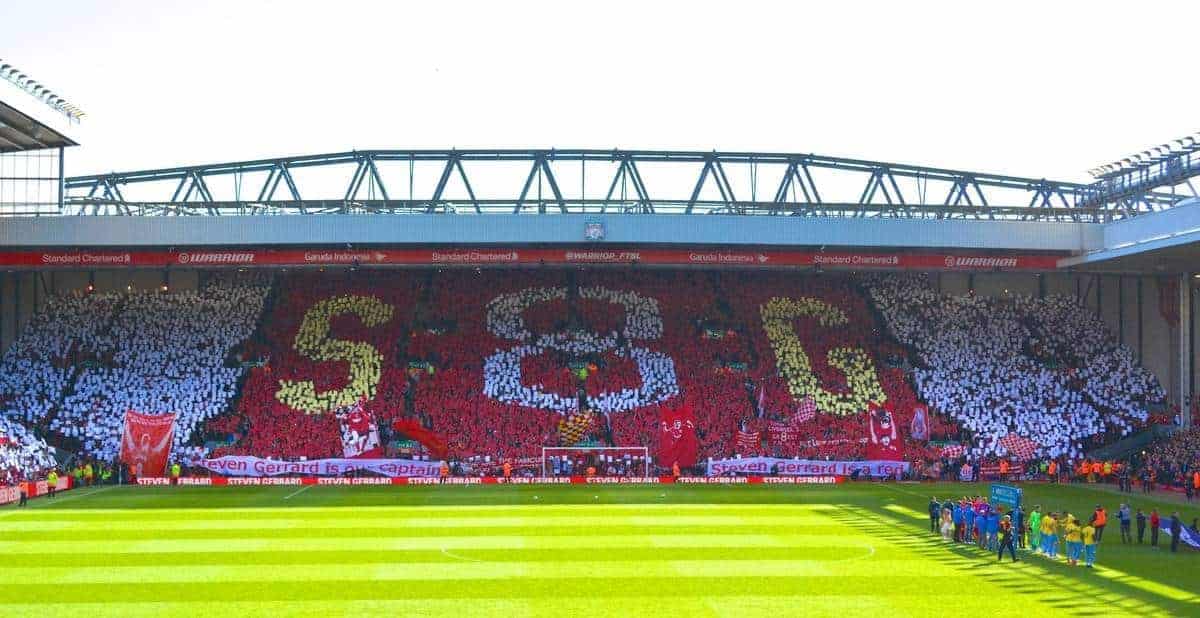 Ben Twleves reflects on a historic day at Anfield on Saturday where Steven Gerrard said an emotional goodbye ahead of his impending summer exit. After a week in which I’d felt great sadness over what was to come on Saturday afternoon, the moment to say goodbye to our best ever player had arrived.

Usually my journey to Anfield is full of discussion, excitement and anticipation as to what may unfold in the hours ahead, but it was a quiet and reflective trip as the realisation set in that this was indeed it.

After all, we may never see one like Steven Gerrard again. A player who adores the Club and the people he plays for, a local lad with the identity of Liverpool Football Club embedded within him, and that’s without even mentioning his stand-alone ability that carried us for the vast majority of his time on the pitch.

Usually in the ground around half hour before kick-off, a slow walk past Stanley Park, along Anfield Road and round to the Kop which was heaving outside with Gerrard shirts, pictures, scarves, flags, and even stewards wearing masks of his face, I was through the turnstile, up the stairs and in my seat on row 58 of our iconic stand a full hour before the 5:30pm start, where I was met by paper for the mosaic for a player I find it hard to put into words to describe.

Perhaps the only way I can is by saying he is simply the best I have seen, and will ever see in the famous red.

Sat almost alone with very few Reds in the ground, I gazed towards the glistening surface, and began to reflect on the many unforgettable moments that our No.8 has given to us all over his unrivalled years. Olympiakos and the Everton hat-trick immediately spring to mind on our own patch, but then you remember the ‘Gerrard Final’ and Istanbul and the countless others. What a player.

As I was reliving it, the Kop began to fill. “Gerrard” was the only name mentioned in conversations held as fans recalled their own memories of the Huyton-born hero, before the first rendition of “Ste Gerrard, Gerrard” rang around with the Kop which was decorated beautifully with the ever-impressive collection of flags and banners held aloft in appreciation of the skipper.

You could feel the passion and pride from the Kopites, who belted out “we won it five times” about the man who almost singlehandedly ensured we did make it a fifth, that he truly was one of our own and that he is simply irreplaceable.

As the 34-year-old was introduced, it was hard to see amongst the thousands of arms holding aloft the stunning “S8G” mosaic but even though I struggled to catch his entrance with my own eyes, I knew of his arrival as Anfield let out a hair-raising roar in unison, befitting of man rightly acknowledged as the best ever.

As Gerrard made his way towards the adoring Kop, You’ll Never Walk Alone kicked in, and so did the tears for a couple of Reds around me, who had been swept up in the emotion of a special, but saddening occasion.

Shortly after the match was underway. The nostalgic Kop made their way through the repertoire of Gerrard songs despite the flat start, which saw Rodgers’ side well and truly second-best to their opponents.

There was always a feeling that the match was insignificant and the day was all about one man, but it was meant to be for the legend himself and the loyal Anfield support, not the rest of the group who are meant to be taking the club forward when Gerrard departs.

Adam Lallana’s opener against the run of play at least provided hope that there would not be a repeat of the Kop’s last stand against Norwich in 1994, but with only one team boasting intent and belief in their play, that hope was short lived when Jason Puncheon equalised, and it felt there was only likely to be one outcome against Rodgers’ toothless and clueless side. A damning indictment of where Liverpool FC finds itself.

A flat first 45 minutes was reflected by a low-key atmosphere for a large part of the second half in which Kopites were hit with the concerning reality that this is what Gerrard leaves behind, and which Palace could have scored more than the two goals they did through Wilfried Zaha and Glenn Murray.

But as the clock ticked, the attention was turned back to the here and now, and the departing legend.

“Steven Gerrard is our captain” was bellowed throughout the remaining minutes as Anfield paid homage to the Scouser for the final moments of his 17 year career, and when the final whistle blew, you’d never have known the majority of the 44,600 crowd had just watched the most gutless of performances on the biggest of occasions.

Despite being let down with a shambolic performance, the vast majority of Anfield – including almost all of the jubilant but respectful Palace fans who chanted “there’s only one Steven Gerrard” – stayed to bid farewell to their hero and say thanks one last time as he embarked on a lap of honour, as sheepish teammates (rightly) took a backseat again in keeping with the rest of the afternoon.

The outpour of raw emotion continued as fans screamed, chanted, and sung their praise to the man who gave some the best days and nights of their lives, who claimed the single best reception for a player Anfield has witnessed – and Mario Balotelli too, judging by the way the Italian recorded the whole thing on his phone – while Gerrard embraced some of the adoring masses at the front of the stand on his last route around a pitch he almost played on his own on at times.

There were tears from some as the Kop favourite walked his last steps on the Anfield surface, but not as many as I thought, with most feeling an inner-anger at the display from the rest and that he is now better off out of it.

But if the performances this campaign and on Saturday are anything to go by, there may be a whole host shed yet as we attempt to move forward without the our greatest ever player.

OPINION: Sadness of Gerrard’s farewell matched only by the anger at the betrayal suffered at the hands of his team-mates