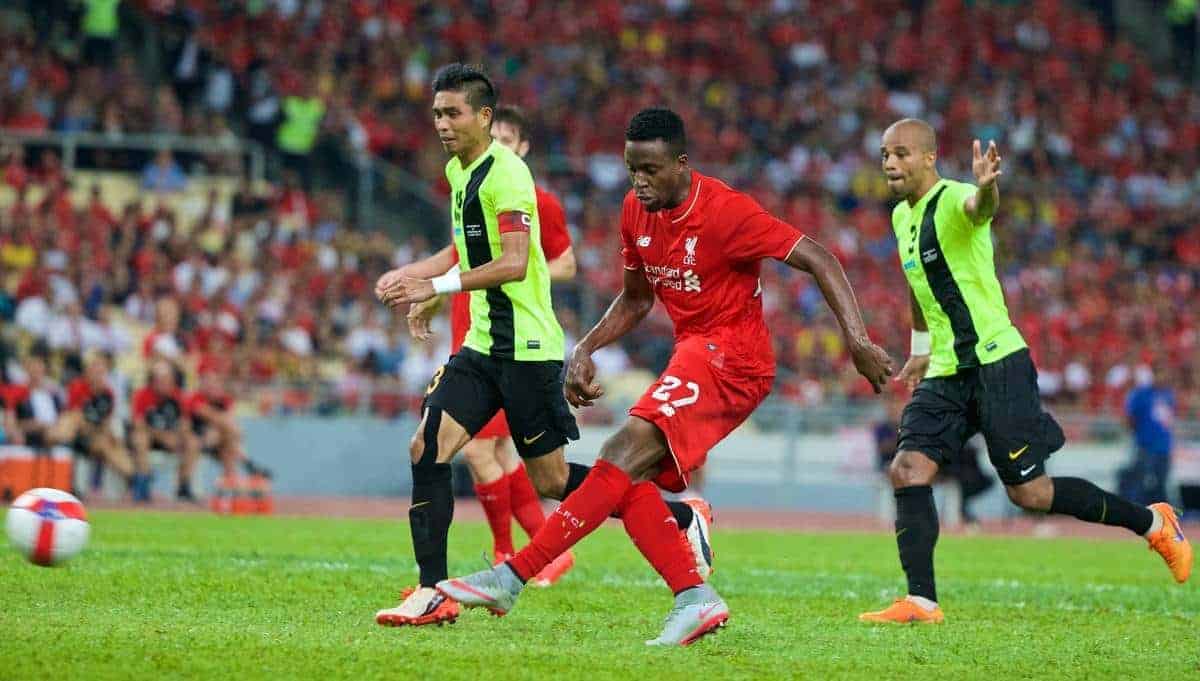 Following the Reds’ score draw in Kuala Lumpur, Ben Twelves picks a number of discussion points from an uninspiring clash. Liverpool rounded off their 2015/16 tour of the Far East and Australia with a flat performance and result against a weakened Malaysia XI.

Brendan Rodgers’ men fell behind to a fine individual effort from Patrick Wleh Ronaldinho after 13 minutes, but a stunning strike from Jordon Ibe levelled the scores just 15 minutes later.

A largely uneventful second half played out in front of an estimated 40,000 crowd in the Malaysian national stadium as the score remained 1-1, denying the Reds a fourth win from four games on tour.

Here are the discussion topics from the game in Kuala Lumpur.

It was hardly the most gruelling of defensive tests for Moreno, but the Spaniard showed promising signs on his comeback to the starting XI.

The Spanish left back provided some of his trade-mark marauding forward runs to support the attack and Adam Lallana down the left side, and his desire put himself in some promising positions was good to see, though his final pass let him down on occasions.

Defensively Moreno was strong, though a bit rash with his tackling at times, but his tenacity to win the ball back quickly was impressive, ensuring he had little danger to deal with down his side.

Regaining fitness and sharpness is certainly the main aim for the 23-year-old who is behind in his pre-season compared to teammates, but it was a positive 80 minutes from Moreno before he was replaced by youngster Joe Maguire.

Dejan Lovren Shows why Mamadou Sakho Must be First Choice

Partnering Martin Skrtel at the heart of the defence once more, Lovren failed to grasp the opportunity to show why he should partner the Slovakian as the season draws closer.

The Croatian was largely untested as the Reds dominated the encounter, but when he was called into action, he proved disappointing next to the equally unimpressive Skrtel, with the partnership extremely unconvincing.

Lovren’s distribution was erratic and defensively he was poor, playing a large part in the Reds falling behind.

Rodgers now giving orders to Lovren on the touchline. #LFC have been poor defensively tonight. Far too open. Missing Sakho.

Hesitancy allowed Malaysia front man Ronaldinho to nip in, and he breezed past Lovren – looking like his former world class Brazilian name-sake – far too easily, before finishing impressively past Adam Bogdan.

Second half, Lovren did improve to his credit. He was more decisive, solid in the challenge and aware to developing danger, and he made a goal-saving challenge to prevent Ronaldinho scoring his second of the afternoon after Skrtel’s error.

It was undoubtedly an improved second 45 minutes, but a worryingly inconsistent and uncommanding display only reaffirmed the need for Mamadou Sakho to play ahead of Lovren.

There was little to get excited about in the dull encounter, but the liveliness and desire of the talented teenager was a rare plus point of the fixture.

The 19-year-old was the Reds’ biggest threat throughout, and he equalised in stunning fashion after cutting inside onto his left foot and unleashing a screamer into the top corner.

Ibe’s confidence was plain for all watching to see, as time and again he picked the ball up and drove forward, looking to spark creation and bring some purpose and productivity to the sluggish Liverpool attack.

His final delivery was inconsistent and even a little frustrating at times, but the positives of his display far outweighed any negatives, with plenty of time to continue working and improving his game.

The wide-man has been one of the real plus points from the pre-season tour, and importantly, he looks in fine form heading into the new season.

Reds Blunt in Attack with Creativity in Short Supply

It was a flat spectacle from the first minute with Liverpool in firm control, but Rodgers’ side failed to turn their dominance into chances and goals.

The Reds lacked spark in and around the box, with efforts on goal – in the first half in particular – coming from individual brilliance as opposed to clever, slick, interchanging play.

Outside of Ibe’s brilliant equaliser, a header from Dejan Lovren from a corner was as good as close as the Reds came to a second, though Divock Origi should have scored before half time after a fortunate deflection fell his way just and placed him one-against-one.

There was a one clear chance created second half for James Milner, who saw his effort saved after a tidy team move.

But that was the Reds’ only real inspiring piece of forward play in the game on a day a blunt attack disappointed with Lallana and Divock Origi in particular struggling to fire.

A disjointed offensive performance played out not for the first time on tour, and Rodgers will be looking to welcoming Philippe Coutinho and new arrivals Roberto Firmino and Christian Benteke to provide a much needed attacking injection. [td_ad_box spot_id=“custom_ad_3″]

The Reds turned in a flat attacking display with chances in short supply in Kuala Lumpur, but Origi squandered the few chances that came his way to turn dominance into goals.

Little was directly created for the Belgium international who lead the line ahead of Danny Ings for the third game in a row, but he should have found the net with the opportunities that came his way.

Latching onto a kind deflection, Origi struck weakly with his left foot from inside the box and saw his effort kept out when he should have scored, and also saw his follow up header saved.

Just not Origi's night. Another bad miss after a perfect through ball from Henderson.

A lack of anticipation then saw the Belgium striker fail to make use of James Milner’s clever through pass, but he switched on for Jordan Henderson’s inch-perfect pass, though he shot wide when searching for the far corner of the net.

There’s plenty reason to be optimistic about over the future of the 20-year-old, but it’s clear there’s work to do – not least with his finishing – before he should be trusted to lead the line on the big stage.