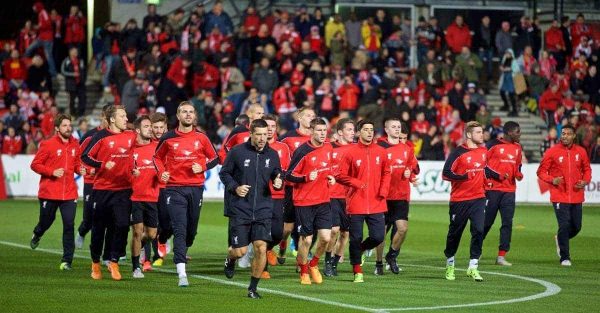 Brendan Rodgers’ Reds play their final fixture in Australia on Monday when they face Adelaide United, before heading off to Malaysia.

Liverpool continue their pre-season schedule on Monday when they take on Adelaide United in their third friendly clash of the tour.

The Reds battled to a hard-fought 2-1 win in Brisbane on Friday against a strong Roar side, who gave Rodgers’ men a thorough workout at the impressive Suncorp Stadium.

The game provided a productive exercise for Rodgers squad, who stepped up their pre-season preparations in front of a special Brisbane atmosphere, and the Liverpool boss will be hoping for a similarly productive fixture in Adelaide.

Victory in Brisbane made it two wins from two so far this pre-season for Rodgers’ men, and the Reds will be looking to make it three victories from three in Adelaide.

Monday’s meeting will be the first time the two clubs have met, as well as being Liverpool’s first ever visit to the city.

Friday’s trip to Brisbane was also the first trip and clash between the two.

United play their games at Coopers Stadium usually, but with a capacity of just 17,000 available at their home ground, the match will be instead be played at the historic Adelaide Oval.

The traditional cricket ground boasts an impressive capacity of 53,500 and a full house of Reds fans is expected once again for the appearance of Rodgers’ team.

Adelaide – who last won the A-League in 2009 – are managed by former Barcelona academy coach Josep Gombau, who is set to begin his third season as United boss.

He guided his side to a third placed finish in the league last season, and Gombau’s team come into Monday’s fixture having suffered a 2-0 defeat to Man City in a behind closed doors clash on Wednesday.

Having played in front of two incredible atmospheres in the two previous games held Down Under, in Melbourne and Brisbane, the Reds are sure to be in for another memorable occasion in front of the Adelaide crowd.

Liverpool have won both of their previous clashes Down Under, and will be looking to claim their third win on Australian soil.

It appears that the Liverpool squad have again come through unscathed from the win in Brisbane, and everyone is available to play a part in Adelaide.

However, Rodgers revealed after Friday’s win that Alberto Moreno has been struggling with a knock so far this pre-season and is yet to play a minute as a result.

Rodgers says that left-back Alberto Moreno has been injured and has only just started training again. #LFC

The Spaniard could miss out again for the third match running as he continues his recovery having not long returned to training.

Philippe Coutinho, Emre Can, Tiago Ilori and Roberto Firmino are all still missing as they enjoy an extended break after international involvement at the end of the season.

Rodgers matched the step up in preparations last time out in Brisbane by naming a strong side, and opting to give certain players increased minutes rather than naming a different XI in each half.

With United set to provide another good test for the squad, the Reds manager could opt for the same selection process again.

However, with the need for the whole group to build fitness levels, Rodgers is likely to switch those who played with who didn’t last Friday, alongside keeping those who have featured heavily such as Jordan Henderson, Martin Skrtel and James Milner progressing nicely.

Should the Northern Irishman utilise that approach, Dejan Lovren could come back into the side as could Andre Wisdom, Joe Allen and Joao Carlos Teixeira.

Lazar Markovic will also be hopeful of playing his first minutes since the Reds opening 4-0 friendly win against Thai All Stars.

Youngsters Jordan Rossiter, Ryan Kent and Joe Maguire have all featured over the first two pre-season clashes, and the academy graduates will be looking for another chance to impress.

Fellow youth products Daniel Cleary, Pedro Chirivella and Sheyi Ojo are yet to feature however, and all three will be hopeful of playing their first match minutes on Monday. [td_ad_box spot_id=“custom_ad_3″]

Having kept his side in a 4-3-3 formation for the entirety on Friday, Rodgers could decide to re-use widely reported second choice shape, 4-4-2 diamond, allowing his side another chance to familiarise with alternative systems before the beginning of the nearing campaign.

The match will kick off at 10:30am UK time and along with all other pre-season games, will be shown live on LFC TV.