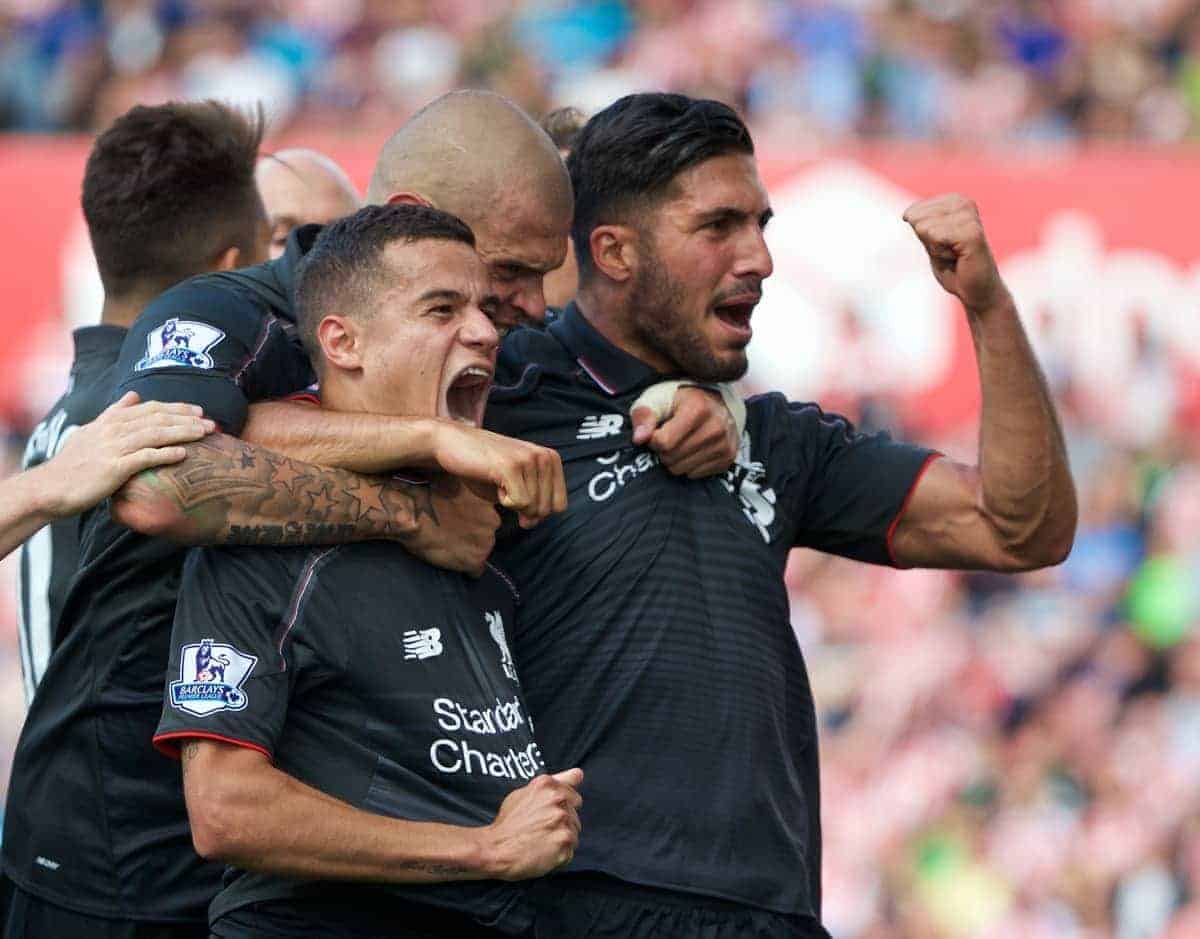 The morning after Liverpool’s ugly late win at Stoke City, we round up the best of the newspaper reaction from the game. It feels a hell of a lot better waking up safe in the knowledge that Liverpool have made a winning start to their Premier League campaign, rather than stuttering to an opening-weekend draw.

It was a dreadful game at the Britannia Stadium, in truth, but Philippe Coutinho‘s majestic late strike proved to be the difference between the two sides.

Here is how the morning papers reacted to the match.

James Pearce of the Liverpool Echo heaped praise on the much-maligned Dejan Lovren, who was arguably Liverpool’s best player on the day:

“The contrast to the Reds’ previous visit to the Potteries back in May was stark.

No-one epitomised that transformation in the camp more than Dejan Lovren, who could hold his head high after a gutsy defensive display.

It was a big call by Rodgers to start the £20 million Croatian centre-back ahead of Mamadou Sakho but his faith was repaid.

Where he spread panic and uncertainty last season, this time Lovren was much more assured and the clean sheet was reward for his efforts.” The Telegraph‘s Chris Bascombe believed the victory was all about redemption, as Coutinho’s stunner made sure the 6-1 loss to the Potters back in May became a distant memory:

“The Brazilian delivered a trademark strike from 25 yards to complete the first of what must be numerous exorcisms as Liverpool bury the ghosts of last season. Scowls and recriminations were thus transformed into ovations and elevated expectations. Here were 90 minutes that were as much about the search for redemption as demonstrating fears heading into the campaign are misplaced.

It must be said Coutinho’s decisive intervention was not in keeping with the game, an untidy largely unfulfilling contest owing more to grit and perspiration than creativity. Rodgers will not care. Nor should he given the scrutiny of his position when he last boarded a coach from this venue.

In terms of character and attitude Liverpool had to be unrecognisable. They were. Presumably the pretty patterns will be weaved as the season progresses.”

Daniel Taylor of the Guardian lauded Coutinho for his match-winning brilliance, in an otherwise dreadful game of football:

“Coutinho had clearly tired of all the mediocrity and when he collected the ball in the middle of the pitch and suddenly changed speed, driving forward and putting himself within his favourite range, it was the first burst of real penetration and attacking intent there had been in the entire match.

His accuracy from distance is a formidable weapon for Liverpool, particularly when he is moving slightly infield, left to right and aiming for the top corner, and the shot was struck with a wonderful mix of power and precision. It was the arc of the ball, starting high and then taking a sudden dip, that took it past Butland, even though Stoke’s goalkeeper managed to get his fingertips to the ball. Coutinho had always been the most likely player to bring some light to a grey match and that was the moment when the entire mood surrounding Liverpool shifted and some of the pressure on Rodgers was released.” “It would, quite frankly, have taken only the briefest daub of colour on the canvas of this bleakest of games to give us something by which to remember the day, but in the end, Philippe Coutinho scored a winning goal that should endure right through to the end-of-season montages in May and beyond.

Bravo to the little Brazilian who scored the kind of goal on 86 minutes that did not just remind us what it is we appreciate about a game that has been in abeyance for the past two months but gave some kind of narrative to an afternoon badly lacking a theme. Up until then, this match had all the charm of a day spent in traffic on the A50, and then Liverpool’s No 10 intervened with a shot of power and surprise.”

Finally, Dominic King of the Mail was generally impressed by the Reds’ new-full backs Nathaniel Clyne and Joe Gomez, who were resolute from start to finish:

“A feature of Liverpool’s pre-season games was the quiet and efficient way England’s right-back went about his business and it was exactly the same here. Rodgers called his performance ‘outstanding’ and while that would be stretching things somewhat, Clyne certainly did all that was asked of him from a defensive point of view and gave the impression he can he a steady influence at right-back.

[Gomez] found himself wrapped in a bear hug from Martin Skrtel at the final whistle and was later showered with praise by Rodgers. There were some bumpy moments from the 18-year-old but that was only to be expected on his first start in the top flight. The aspect which caught the eye most was his refusal to be bullied and his persistence helped create the opening for Coutinho to score.”

Next up for Liverpool is the home game against Bournemouth a week Monday, as Liverpool look to continue their 100 percent winning start.