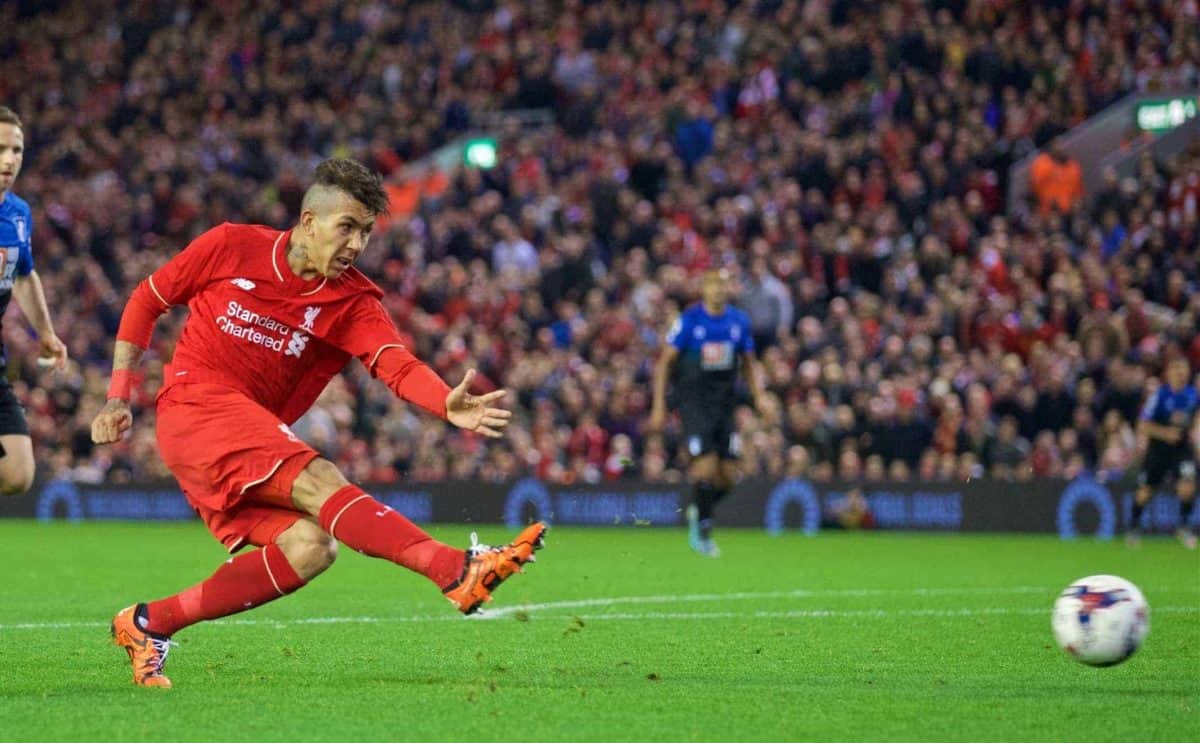 Following his star turn in Liverpool’s 1-0 League Cup win over Bournemouth, Roberto Firmino can continue to shine under Jurgen Klopp. By now, given the amount of praise lavished on him following his arrival at the club this summer, Liverpool supporters should be well aware of just what Firmino can offer.

But in the Reds’ 1-0 win over Eddie Howe’s Bournemouth on Wednesday night, Firmino put this reverence into practice.

Receiving the Man of the Match award after helping secure Klopp’s side progress to the quarter-finals, Firmino was fully deserving of the adulation—and with this being just his first start under the new Liverpool manager, there promises to be a lot more to come.

Firmino is poised to dominate in Liverpool’s attack after this excellent individual display.

The onus was on the Brazilian to drag Liverpool to victory, with Origi having cast little more than a shadow as the Reds’ lone centre-forward in the first three games of Klopp’s tenure, and both Teixeira and Ibe representing relatively inexperienced supporting options.

Fortunately, firing his first effort on goal within the first 20 seconds, Firmino set the tone early on.

Dragging his shot just wide of Adam Federici’s far post after finding space on the edge of the Bournemouth penalty area, Firmino encapsulated his performance in two touches.

Full of energy, intelligent movement and creative inspiration, Firmino was Liverpool’s attacking spearhead—only let down by his inability to finish. It was Firmino’s through ball that set Teixeira on goal on 17 minutes, with the Portuguese’s sumptuous back-heeled attempt hammered home at the second time of asking by Nathaniel Clyne.

He continued to probe on the edge of the penalty area throughout, with flicks and deft movements carving out opportunities for his team-mates, such as with Ibe’s 20-yard strike deep into the second half.

When he wasn’t creating chances for others, Firmino was looking to trouble Federici with efforts of his own, taking Matt Ritchie out of the game with an exquisite nutmeg on 35 minutes before curling a shot just short of the top corner.

It was a performance full of typical Brazilian vibrancy, but it was the way in which Firmino battled off the ball that was most impressive.

Snatching up chances and nipping loose balls off the toes of Howe’s defenders, Firmino will have enthralled the onlooking Klopp.

Klopp will have seen enough in Firmino’s 87 minutes on the field to convince him that he is ready for a starring role in the Premier League, with the Brazilian showing little sign of struggle after recovering from a troubling back injury.

Firmino never let up, pursuing Cherries defenders and chasing lost causes right up to his withdrawal—and this will have massively endeared him to Klopp.

“He is ready,” the manager concluded in his post-match briefing.

“He is prepared for this league, he is physically strong, a good technician and usually he is a good finisher. A good player.”

Having faced up to the 24-year-old during his time with Borussia Dortmund in the Bundesliga, when Firmino was leading the Hoffenheim attack alongside Kevin Volland, Klopp is fully aware of his talents.

The German even reportedly tried to sign him during his time at the Westfalenstadion, hoping to add him to an impressive forward line that featured Mario Gotze, Marco Reus and Robert Lewandowski.

But with Firmino deciding to stay with Hoffenheim up until this summer, Klopp was forced to watch on in admiration.

Now, while he picks through the bones of his inherited squad, he is able to relish Firmino’s quality.

In many ways, as proven at Anfield on Wednesday night, Firmino is Klopp’s perfect player.

His relentless work rate and determination to win the ball when not in possession, and the pace, technical quality and spacial awareness shown when surging forward in attack, is hugely reminiscent of former Liverpool striker, Luis Suarez—a model of Klopp’s front-footed philosophy.

Starting in his natural No. 10 role for the first time since joining the Reds, Firmino proved what he is capable of achieving—and, operating below full fitness, this was highly encouraging.

Klopp is clearly enamoured, and so too are the Liverpool support.

Receiving a standing ovation on his withdrawal late on on Wednesday night, Firmino was given a taste of what is to come if he continues his strong performances for the Reds.

Ahead of his £29 million move to Merseyside this summer, Firmino was regarded as a target already operating above the club’s station; after excelling for five seasons at Hoffenheim, the Brazilian looked set to join a Champions League club.

Manchester United were circling, despite having already snatched Memphis Depay from Liverpool’s clutches, but, somehow, Firmino ended the summer with a move to Anfield.

A charm offensive coincided with the intervention of Ian Ayre, as well as a ringing endorsement of the club by compatriot Philippe Coutinho, and Liverpool had pulled off one of the surprise signings of the transfer window.

This was a remarkable piece of business by the club, and a signing which capture the imaginations of the Kop—much like with Klopp’s appointment at the beginning of October.

Firmino is the real deal; a player supporters can get behind, and who could go on to attain icon status if he achieves his potential on Merseyside.

He took one step towards doing so in his first start under Klopp on Wednesday night.

With Daniel Sturridge and Danny Ings both sidelined with injury, and both Christian Benteke and Philippe Coutinho battling for fitness or form, Firmino has been given the opportunity to star in Klopp’s attacking line.

Though it was just one performance, against a weakened Bournemouth in the League Cup, Firmino showcased the ability that justified Liverpool’s significant outlay this summer.

He can only get better, and that should be a worrying reality for the rest of the Premier League.