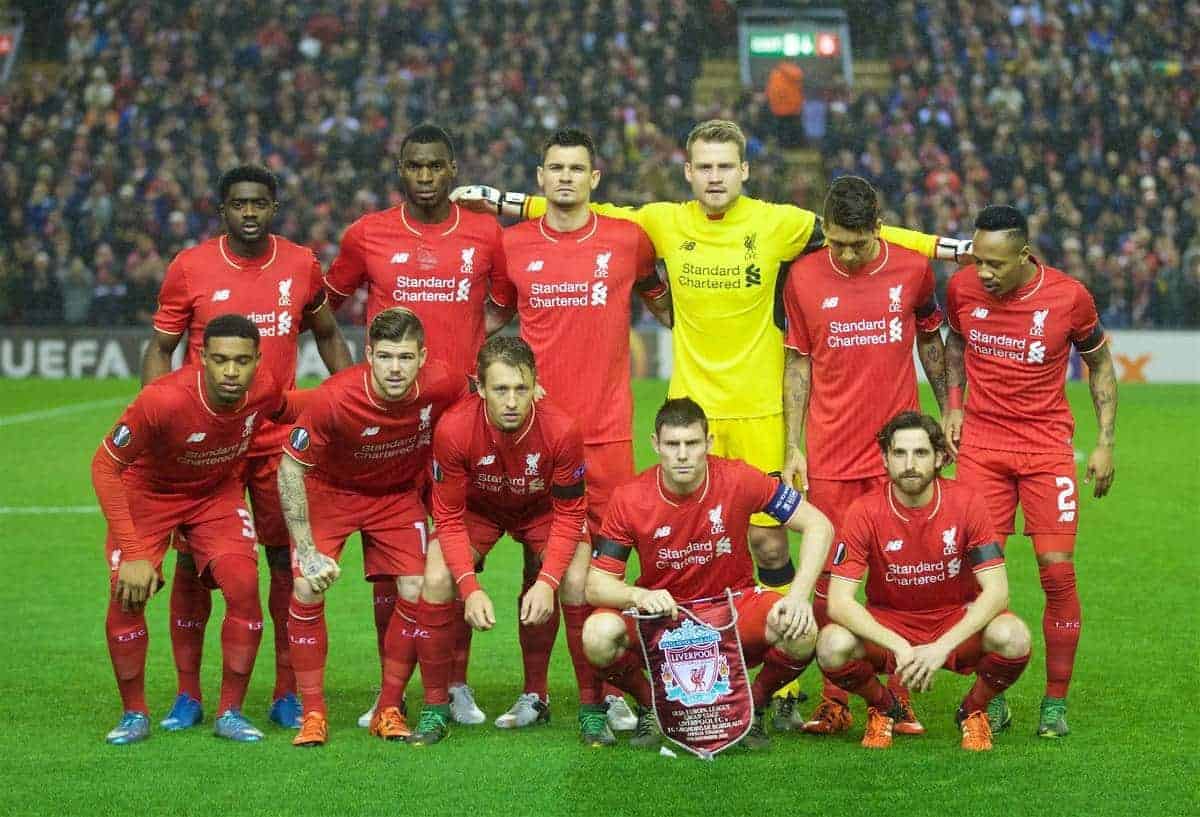 Here’s Alex’s take on the players Jurgen Klopp needs to evaluate, and his assessment of their performance so far this season.

Note: this is a follow on to Alex’s article here.

Mignolet – quite simply not good enough. Whether it be decision making, confidence, distribution, punching when he should be catching, he’s one of the main reasons we’ve conceded over 120 goals in the last 90 games

Verdict – C minus. Needs to be replaced. Back up keeper at best.

Clyne – the one player who can look in the mirror and not have to glance away from his reflection, A genuine upgrade to his predecessors.

Verdict – B. Consistent, but can add some more threat going forward. Needs to find the right balance.

Another almost ever present in the 120 goals in 90 games statistic, and it’s abundantly clear (at least to my eyes) why he’s part of that dire statistic. Yes, he makes many good challenges and yes he fights for the cause. But he’s positionally indisciplined, he lunges in when he shouldn’t, he backs off when he shouldn’t, and generally adds to panic rather than calm. It’s not a coincidence, or bad luck, that he scores so many own goals.

Verdict – C minus. His time as a first choice central defender is up.

I know he’s had a couple of improved performances of late, but let’s not consider him as the new Alan Hansen just yet. He needs to show a level of consistency from now until the end of the season to show he’s up to the standard required. Maintains the tendency to panic when under pressure. Still, a recent glimmer of hope when a few weeks ago all seemed lost for him.

Verdict – C. The next 5 months will likely make or break him but his partnership with Sakho has seen 5 clean sheets in 8 games which should give Klopp some food for thought.

The only central defender who has shown anything like the form (or ability) expected, but has still been somewhat erratic. Injuries have curtailed his progress this season, but has the ability, and the heart, to be successful long term.

Verdict – B minus. Injuries have disrupted his season and still finding his feet, but he’s the best we have at the moment in the centre back area.

Reminds me of Boris, my Beagle, when he would escape his lead and runs off into the sunset. For all his forward forays, the concern I have is the lack of development as a consistent, reliable defender. We all want to see full backs overlap and attack, but not at the expense of defensive liability. Sometimes I have to look around the entire pitch to see where he’s run off to! Far too often out of position, and must learn to focus on defending as his priority.

Verdict – C. For all his energy and passion, he’s been part of the defensive lapses, both personally and collectively, far too often. Needs to progress quickly as he has Brad Smith and others capable of replacing him

Well, against seemingly the vast majority, I’ve never seen Lucas as the top quality answer needed in the defensive midfield role and he’s certainly not the answer recently. (Those who won’t hear a word against him, you can stop reading now.) He continues to offer nothing going forward, spends the majority of games trying to avoid a 2nd booking (which impedes his ability to fully do his job by the way) after a needless hack at an opponent, and it’s a fallacy that he brings protection to the back four. Take a look at goals against when Lucas plays. He’s also too slow for a Premier League where younger, faster players breaking quickly is becoming the norm now. Days are numbered.

Verdict – C minus. His lack of pace is now consistently exposed by players breaking past him, and his incessant need to foul to stop them. Wouldn’t make the first 11 of any other top 6 team.

A massive disappointment from a player I had genuine high hopes for upon his arrival. It now appears that being the consistent grafter in a team where he had Silva, Aguero etc. adding the sparkle, hid the fact that being a consistent grafter is all he has to offer. As a creative force he’s been non-existent and not having the Silva/Aguero type players around him has shone a giant spotlight on his limitations.

Verdict – C minus. Genuinely unsure that he has a future with us due to the one-dimensional nature of his game.

Ibe remains a young lad with potential trying to find himself. His decision making will improve with time and coaching, but as of now, his inexperience means he’s choosing too many wrong options. Still, he’s giving his all, is one of the brightest youngsters we have coming through the ranks and certainly has time on his side.

Verdict – C. Must add end product to his game if he is to be successful, but I’m confident he will

It’s hard for me to remember such a silky, skillful, technically gifted player who offers so little to a team. Some of his movement and ball control is a joy to watch, he works tirelessly and yet remains the Stewart Downing of 2015/16. No goals, and 3 assists just isn’t acceptable in 20 games. As a player, he’s been a disappointment – as a 26 million pound player, he’s been a disaster. I have come to the conclusion that he doesn’t have the mental strength to roll up his sleeves, dig deep and fight for the cause.

Verdict – C minus. Too weak physically and mentally.

As expected, rarely starts, and rarely does anything of note when called upon. Offers nothing defensively, nothing going forward, and nothing in midfield. What does that tell you?

He’s a step up from several of his midfield peers, and you can never question his commitment. But should he be comfortably Liverpool Football Club’s most reliable midfielder? He’s a very good player, he’s captain, but a great like Gerrard, Souness, Molby, he is not. He’s another whose season has been hampered by injury, but even when he’s been fit has been nothing more than decent.

Verdict – C+. Needs better players around him, then his passing ability and energy can be better utilised.

Let’s not beat about the bush here, Firmino has been absolutely dire. I’ve been watching Liverpool for over 40 years now, and (Man City aside) NEVER have I seen such a feeble introduction as the displays witnessed by this boy. I’ve truthfully never seen a Liverpool player s**t out of tackles like he does. Some of his first touches, passing and decision making have been League 2 standard at best. He might yet come good, but so far, he’s been awful.

Verdict D – Klopp has faith in him, so I’ll watch and wait and happily hope to be proven wrong.

One of the few players so far this season who has earned his stripes. He’s not the finished article by a long stretch, but seeing as it’s his first season in his proper position, he’s been solid and decent – and if I could use those same terms for more players, we wouldn’t be languishing in mid table. He shows heart, passion and courage – three characteristics in short supply around him.

Verdict – B. For a young lad, in the absence of a consistent midfield partner he’s done well and is visibly growing as a player and an influence with each passing game.

The little magician seems to have misplaced his wand. Since the massively encouraging battering of Man City, Coutinho’s form has dipped alarmingly. He’s back to taking speculative pot shots from silly positions, but in contrast to his fellow Brazilian, at least he tries. He’s also offered 25% of our goals this season which can’t be sniffed at given our inability to hit the back of the net.

Verdict – B minus. Add quality alongside and ahead of him and he’ll be back. But cut out the attempts at worldies Phil.

I think wherever Benteke plays he will score goals, He just has that instinct and eye for a goal. But, by god he has to do more! He can’t just pop in a goal every 2 or 3 games and feel his job is done. Aston Villa we are not! He needs to graft. He needs to work, and he cannot be so lackluster and static. We’ve heard him recently talking about how the manager is coaching him to be more involved and mobile, then I watch the games and he’s as statuesque as ever. Today, his lethargy stretched to his inability to even get off the ground, where he won 2 out of 13 aerial duels. I asked the question in a prior article, is he a half yard slow after coming back from injury, or is he just half a yard too slow? You decide… but let’s not forget he is our leading scorer and god knows where we’d be without his six goals.

Verdict – B minus. But time will tell if he has what it takes in a Klopp team

Early signs weren’t good but his hat trick against Southampton certainly helped his confidence and development. Has looked much more the part recently and his injury couldn’t have come at a worse time. At least he’s built a foundation now so let’s hope he can flourish.

Verdict – C overall. One of the few (like Lovren) whose rating would be higher if based on his last few games.

So there it is… overall we are a team far below average because too many players are far below average in either their ability or performances. The one major bright shiny object we have in our favour though, is a certain soft German at the helm.

He now knows everything we know, he’s sharing our pain at the kind of anaemic performances we experienced both today, and far too often this season. But I am certain we have a manager who won’t accept anything less than excellence and he will strive relentlessly for it.

We’ll need to live with some more ups and downs, and likely some more depressing defeats while Klopp realises his vision. We might not even make the lucrative top four which is becoming more of a harsh reality with every defeat.

But all is not lost – not by a long stretch. Short term, we need to brace ourselves for more struggles as Klopp separates the wheat from the chaff. But if you watch his reaction to what he saw in the post match interview today you’ll see it in his eyes…

… that longer term, we have exactly the right man to take us back to the summit.