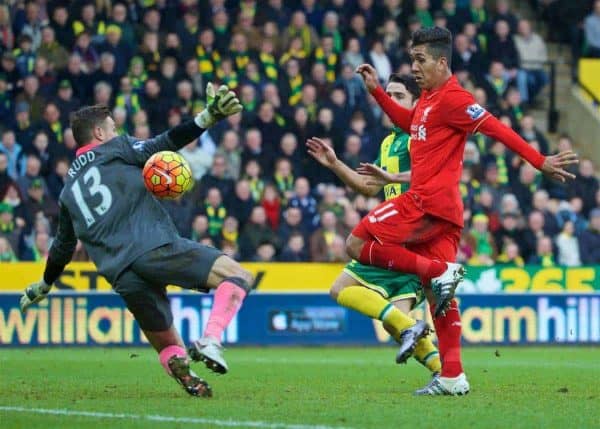 Liverpool’s crazy 5-4 victory over Norwich City infuriated with a shambolic defensive display, but it was the welcome return of killer instinct in front of goal that proved the difference at Carrow Road.

Meetings between Liverpool and Norwich at Carrow Road have had a habit of producing goal-crazy affairs in recent seasons.

15 had been scored in the last three East Anglia meetings, in fact, but despite the recent goal-fests, few would have predicted the breathless nine-goal thriller that unfolded – especially with both side’s form heading into the game.

It was a performance from Jurgen Klopp’s Reds that infuriated and exhilarated in equal measure, but vitally, it was one that saw a long-overdue return to Liverpool being clinical in front of goal.

The Reds were second best for large parts at Carrow Road, unable to grab a foothold in the game and seeing goal-scoring chances restricted as a result.

From the off, Alex Neil’s side were in the faces of Klopp’s men, who were swarmed and pinned on the back-foot by a determined home side desperate to ease their growing relegation fears.

Norwich’s relentless energy out-pressed Liverpool, leaving the Reds without a foothold in the contest, unable to enjoy sustained possession or win the midfield battle, ahead of a defence who yet again handed out dreadful goals with “rubbish” defending, as Klopp described it.

Opportunities were in short supply for Klopp’s side as they struggled to establish positive rhythm or momentum in their play – the Reds’ lowly 48% of possession and 75% pass completion contributing heavily to their lack of dominance.

The familiar consequence left the Reds leaking goals at one end, and struggling to create at the other – despite the score-line telling a false story of an end-to-end game of high-quality attacking football.

Roberto Firmino was isolated for the most part, with Jordon Ibe and James Milner struggling to provide support which saw Adam Lallana improved when later introduced.

But the Brazilian showed he’s really finding his feet at Anfield, playing a vital role as he finds the form that prompted his £21.3million summer move.

This was in stark contrast to Norwich, who attacked in numbers causing numerous ‘nearly’ moments and reaped the rewards with Dieumerci Mbokani, Steven Naismith, and Sebastian Bassong’s efforts, with Wes Hoolahan scoring from the spot.

Few genuine chances came Liverpool’s way over the course of 90 minutes, but those that did were converted in the ruthless manner Klopp has long called for.

Saturday’s thriller showed like no other that if you take chances, you win games.

Thankfully, Liverpool did exactly that despite their best efforts to help Norwich in their relegation fight.

With two clear chances, Firmino converted both, finishing well on his left foot, before Jordan Henderson’s clinical, well-taken volley offered hope of a comeback for the Reds that Firmino completed in expert fashion as he slotted home delicately in the box on his right.

Three shots on target for Klopp’s side, three goals.

Having missed a guilt-edged chance at 1-0 – the only clear wasted in the game – Milner made no mistake second time round, calmly slotting home when one-on-one, before Lallana’s scuffed volley netted the killer fifth with just the seventh shot on target the Reds mustered.

Five goals from seven shots, and only one clear chance passed up – Klopp’s calls to show more confidence in front of goal were answered emphatically.

Most pleasing was the composure and decisiveness of each finish, as well as the conviction behind the strikes, with Liverpool having lacked in all three departments too often in their shooting this season.

It was a sharp finishing display from Klopp’s men that had shades of the ruthlessness of 2013/14 about it, and one that if Liverpool could have replicated against the likes of Newcastle, West Brom and Man United, would see them sat a lot closer to fourth place.

More of the same

It has been a hugely frustrating season of goal-scoring for Liverpool, who had found the net less than relegation-zoned Sunderland before the lunchtime kick-off.

But rather than looking back, the welcome goal-scoring blitz must be used as a springboard for sustained improvement from this point on.

Klopp’s side sit second to only Man City in the Premier League for chances created, but woefully 19th for their rate of converting those – this now must improve quickly.

Having dished out another punishing offensive performance on the road, the target must be bettering that record this time around, alongside making it easier for themselves at the other end by improving the shambolic defending at set-pieces and against balls lobbed in the box.

Doing so would likely see more wins, more points, and Klopp’s side climbing the table, and with 15 games of the league season to go, who knows what could happen in the most unpredictable of Premier League seasons.

Confidence in front of goal would have been restored in the Klopp’s squad after the exhilarating 5-4 win, especially with midfielders joining the attack in sharing the burden of finding the net.

Liverpool must now build on the welcome ruthless attacking showing as they refuse to give up in their pursuit for a top four place.