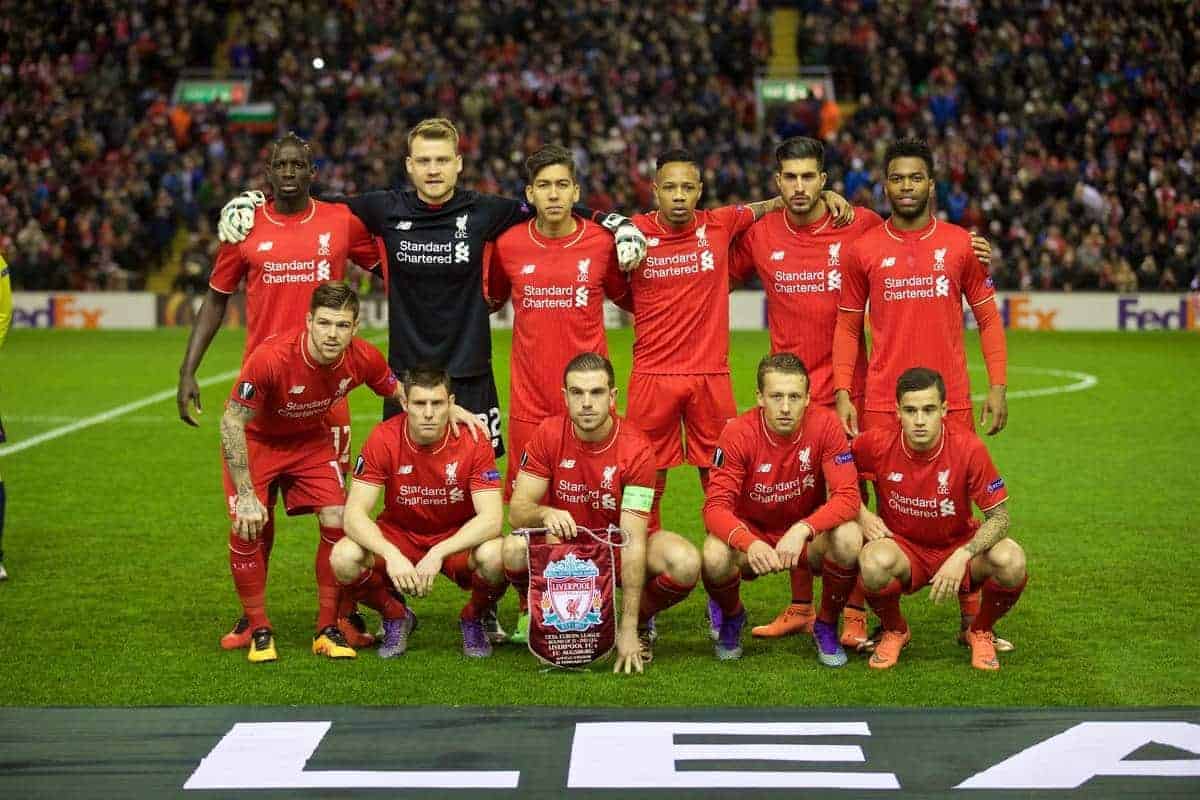 Following Liverpool’s 1-0 win against FC Augsburg on Thursday evening, we assess the performance of each Reds player at Anfield. It was a fairly quiet night for the Belgian, but he coped well with almost everything that came his way.

He made one solid save from Kostas Stafylidis in the first-half, and after the break he reacted quickly to deny Tobias Werner and produced a good punch to clear danger.

The 27-year-old’s distribution was better than of late too, although he did almost misjudge the flight of a high ball early on.

A typically neat and tidy night from Clyne – how many times have we said than this season?- who hardly put a foot wrong from start to finish.

The 24-year-old offered plenty of attacking support down the right flank, and never looked troubled defensively. Final ball not the greatest, though.

There was one dreadful moment from Lucas, in which his backpass almost gifted a goal to the visitors, but he was otherwise superb at centre-back.

The Brazilian made numerous interceptions, displaying his expert reading of the game, and he didn’t look like someone playing out of position. His passing was crisp too.

Has he done enough to earn a start at the back on Sunday? Even Sakho’s most ardent supporter would have to admit that the Frenchman has been below-par since returning from injury, but he is definitely getting back to his best.

The 26-year-old was strong in all aspects of his play against the Germans, from his use of the ball, pace, strength and all-round dominance.

When he is like this, Sakho is a top class centre-back, but he needs to kick on and find more consistency now.

An energetic performance from Moreno, who was a real outlet down the left time and time again.

There was the occasional moment of frustration with him – he needlessly tried to nutmeg an opponent at one point – but all in all he looked far better than the brain-dead Moreno we have seen at times this season.

The young German has had more influential, eye-catching performances in a Reds shirt, but he is starting to play with a real maturity.

He was composed in possession, strong physically and disciplined in the centre of midfield, and he is clearly someone Jurgen Klopp expects big things from.

The flack he gets from some supporters is extremely harsh, and it is so easy to forget that he is still a footballer learning his trade. Good throughout.

Henderson has been a shadow of his former self since injury, but this was more like it from the Liverpool captain.

There was far more zip and incisiveness to his passing, and he looked fitter and stronger than he was in recent weeks.

He did become a little sloppy on the ball as the game went on, however, with some of his decision-making lacking real quality. Relentless hounding of the opposition.

Milner is never going being a universally-admired player, but this was a typically effective display from the England international.

He was industrious and hard-working down the right-hand side, showing great experience in the latter stages, and his early penalty sent Liverpool through to the last 16.

This was the dazzling Coutinho that we have grown to love, and in this mood, there are few more enjoyable players to watch.

The 23-year-old’s link-up play with Daniel Sturridge, in particular, was superb at times, and he brought a creativity and threat that has been missing so much without him in the side. He can improve too.

Firmino was the least effective of Liverpool’s attacking players, and despite showing moments of class, he frustrated at times.

The South American lost the ball on a number of occasions, which is very unlike him, but his pressing and all-round team ethic was admirable.

Once again Sturridge showed exactly what the Reds have been missing without him in the team, with his pace, creativity, movement and link-up play all bordering on world-class at times.

The Englishman did miss one glorious chance, which was very uncharacteristic, and he looked annoyed when he was substituted midway through the second-half.

That is a good thing, though, and is further proof that he is just desperate to play football.

The young Belgian looked sharp when he came on, and is now definitely ahead of compatriot Christian Benteke in the strikers’ pecking order.

Not enough time to make an impact, but did nothing wrong. Klopp went with arguably his strongest possible team, with Lucas replacing Kolo Toure the only debatable change, and it paid dividends.

Some of the football in the first-half was fabulous, and a week on the training ground under the 48-year-old’s coaching has cleared paid off.

There is a bit of steel emerging in the side under Klopp too, and there is every chance that Liverpool would have gone out if Brendan Rodgers was still in charge.