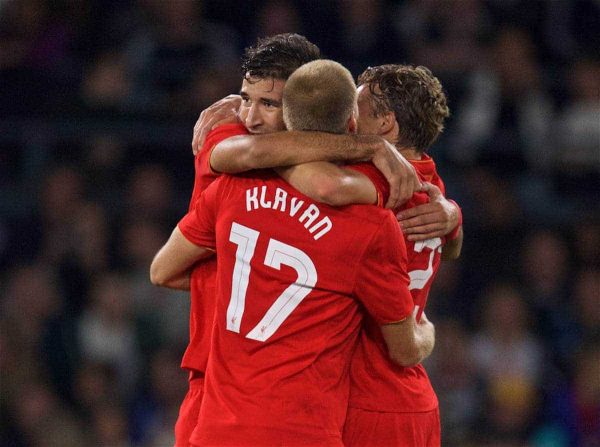 “They are formidable, and they are to be feared” – How the media reacted to Derby 0–3 Liverpool

The media praised Liverpool’s ruthlessness and the performances of Philippe Coutinho and Roberto Firmino after the dominant 3-0 victory against Derby in the League Cup.

Liverpool ensured their place in the fourth round draw, producing a dominant display and deserved win in Derbyshire, proving too much for Nigel Pearson’s Rams.

Ragnar Klavan put the Reds ahead from close range, converting Philippe Coutinho’s corner, as Klopp’s men made the breakthrough their play warranted after 24 minutes.

First-half provider Coutinho then notched himself, as he arrived with perfect timing to sharply finish a brilliant pass from Roberto Firmino with 50 minutes on the clock, and Divock Origi completed the scoring shortly after, lashing a powerful strike into the roof of the net.

It was an extremely impressive display from a rotated team boasting seven changes, showing the quality and depth of the squad at Klopp’s disposal, and here’s how the media saw the win.

Producing another confident winning display to make light work of Championship opposition, reporters commented on Liverpool’s rapid progress and marked improvement with the way in which they deal with lower-league opponents.

The Express‘ Paul Joyce was among those to note Liverpool’s progress, signified by Tuesday’s “routine” win in comparison to this time last season:

“This was as routine as victories come, though Liverpool will not mind that. A year ago this week they squeezed beyond Carlisle United on penalties and the progress Klopp is stealthily making can be illustrated by the reality that some assignments are as straightforward as they appear.”

“They got only three goals this time—from Ragnar Klavan, Philippe Coutinho and Divock Origi—but their performance underlined manager Jurgen Klopp’s wish for a team with no European distractions to take this competition seriously. As their fourth victory in five games, it also underlined that Liverpool appear to have found an impressive winning groove.”

“For too long, Liverpool have made hard work of it against lower-league opponents, but after putting five past Burton Albion in the previous round and following it up with a stroll against Derby, it looks as though they may have finally figured out how to deal with these kinds of fixtures.”

Goal’s Melissa Reddy felt the Reds showed they are now a side to be feared:

“If the message hadn’t been received yet, Liverpool spelt it out clearly again here, in bold lettering: they are formidable, and they are to be feared.”

“Liverpool are sharper, steelier and stronger across the board. They act as the attacking juggernaut that irresistibly and incisively slices the opposition apart in seconds, but the Reds can also cause damage from set-pieces and stun goalkeepers from distance.

“They are not just a counter-pressing outfit, they want to conquer the ball. They are not simply full of firepower, they are ferocious in their battle for second balls and possess as much bite as they do brilliance.”

“Perhaps learning their lesson from that day at Turf Moor, Liverpool did not panic when the Rams had all of their men behind the ball. There wasn’t a constant stream of ill-thought strikes at goal from long distances but instead patient and smart passing between the midfield and forward three.”

“For all their stellar attacking qualities, the Merseysiders also superbly dealt with matters at the back.

“[Karius’] aggressive starting position allows Liverpool to play, as per their blueprint, higher up the pitch. It also ensures they win back possession quicker with the German sucking up loose balls and sending his side back on the front foot.”

Making seven changes to his side but seeing no decline in the impressive performance level of recent games, reporters praised the strength and quality of the squad.

“There were seven changes to Liverpool’s starting line-up, but their superiority remained intact.

“Klopp stated pre-match that any lineup he fields this season will be a powerful one, and the triumph in the East Midlands serves as evidence.|

The Liverpool Echo‘s James Pearce was among those buoyed by the way form was maintained:

“Despite making seven changes, there was never any danger of Klopp’s men slipping up. The deputies delivered and momentum was maintained impressively following those Premier League scalps of Leicester City and Chelsea.”

Echo colleague Ian Doyle noted how important it is to have strength in depth:

“Against Derby, Klopp admitted his players were far from their best but were still plenty good enough to ease to victory.

“The ability to make changes and win well is the hallmark of any successful team.”

“The changes he made from his regular Premier League lineup were sensible and did not weaken the side too much.

“He was able to leave out some players who would benefit from a rest, retain some who did not need one while also providing some valuable game time for those on the fringe of the team.”

Producing their latest magic act against the Championship side, the watching media eulogised over the dazzling performances of Coutinho and Firmino.

Reddy was among those to heap praise on the Brazilian duo:

“Coutinho and Roberto Firmino were peerless, showcasing deft touches and nutmegs while exuding an abundance of confidence and class. They played it simple too, and were simply outstanding in doing so.”

“The 24-year-old Brazilian has been overshadowed in the early weeks of this season by new team-mates like Sadio Mane but on this occasion he grabbed star billing, scoring once and playing a major part in Liverpool’s other two goals.”

“The German was calm, collected and useful with ball at his feet on Tuesday night. Liverpool’s defenders trusted him in tight situations and the former Mainz keeper looked to kick-start rapid counterattacks with his distribution after collecting the ball—a tactic which Mignolet does not feel comfortable doing.”

“At 6’3”, Grujic cuts an imposing presence in midfield and his languid style, efficient distribution and ability to arrive late in the area will surely become hallmarks of his game.

“But it’s already clear the Reds have found a player.”

“The young Serb was the star of Liverpool’s preseason, but he’s had to wait a while for his first start. He certainly didn’t disappoint, producing a classy display and showing just why he’s so highly thought of.”

And an unsung hero of the team, Doyle took the chance to praise Nathaniel Clyne, Liverpool’s “Mr. Reliable”:

“Nathaniel Clyne has proven Mr Reliable under Klopp, a reassuring presence in a defence that has undergone plentiful change during the German’s first season in charge.”