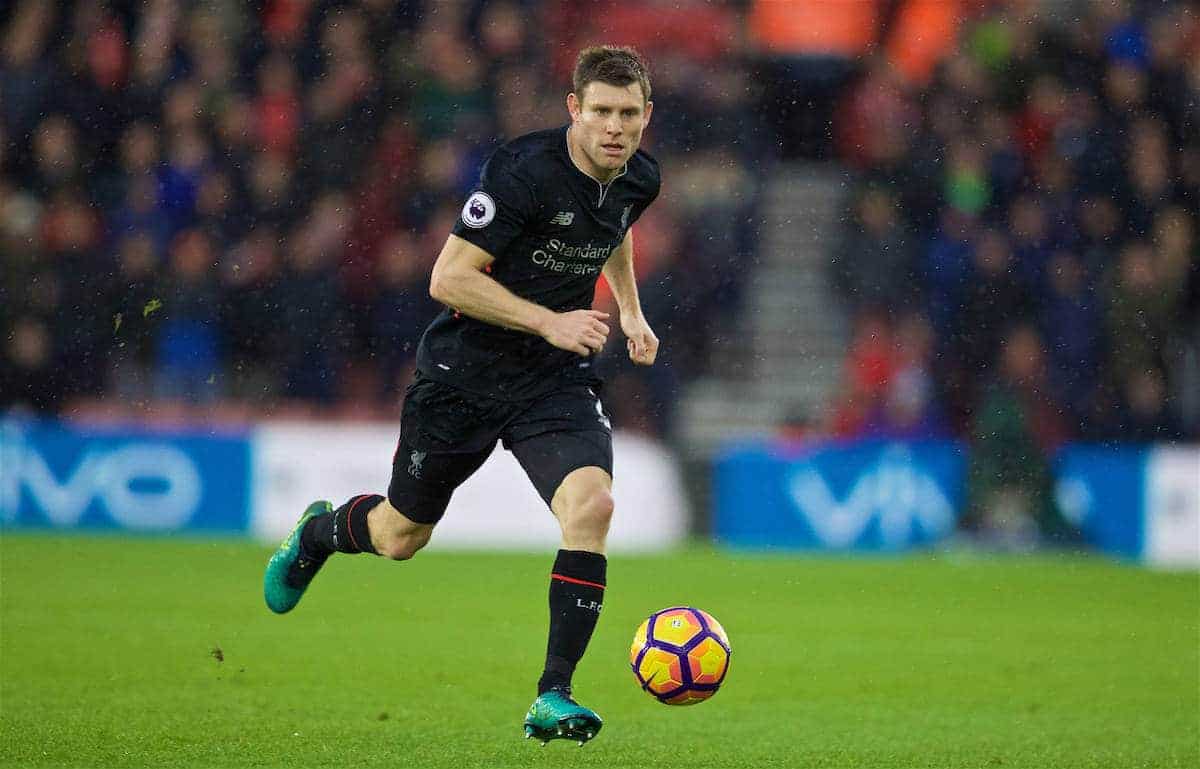 Despite Liverpool lacking the cutting edge required in Saturday’s 0-0 draw with Southampton, James Milner doesn’t feel the international break was to blame.

Milner was one of the players to spend the November break on Merseyside, having retired from England duty back in August.

But of Jurgen Klopp‘s starting lineup at St Mary’s, Nathaniel Clyne, Jordan Henderson, Georginio Wijnaldum, Sadio Mane, Philippe Coutinho and Roberto Firmino had all been away with their respective countries.

Mane, who turned out for Senegal against South Africa, and Brazilian duo Coutinho and Firmino clocked up almost 40,000 air miles between them.

However, while the Reds were unable to seal victory over the Saints, attempting 15 shots on goal but failing to beat goalkeeper Fraster Forster, Milner doesn’t believe this was a sign of post-international fatigue.

“[It was] a pretty good performance, I think, I can’t remember them having too many chances,” he explained after the game.

“We dominated the game, really. They’re a good side so to create the chances we did was the hard part, but we didn’t take them and that’s frustrating.

“[A lack of sharpness] is maybe something you worry about after the international breaks but it wasn’t like we were off the pace.

“We were on top for the majority of the game and we created the chances but that final finish wasn’t there.”

Instead, Milner lavished praise on his team-mates for the amount of chances they created, and their defensive efforts in stymieing a Southampton side that included Nathan Redmond, Sofiane Boufal and Charlie Austin.

“They tried to attack us but we pegged them back and got on the front foot and they fell into that pattern,” he continued.

“They’re a good team, they’re well organised and they’re disappointed with where they are in the table.

“I don’t think that’s a true reflection of what a good side they are.

“[We’re] disappointed but it’s a point and a clean sheet which is the least we should be getting.”

Liverpool’s organisation was certainly impressive, with both Joel Matip and Dejan Lovren in great form at the back.

But Coutinho in particular was noticeably sluggish, and it remains a mystery as to why Daniel Sturridge didn’t start ahead of the Brazilian, who returned from South America with a tight hamstring.

However, as Milner attests, taking a point away from St Mary’s is far from a disaster, with last season’s 3-2 defeat still fresh in the memory.