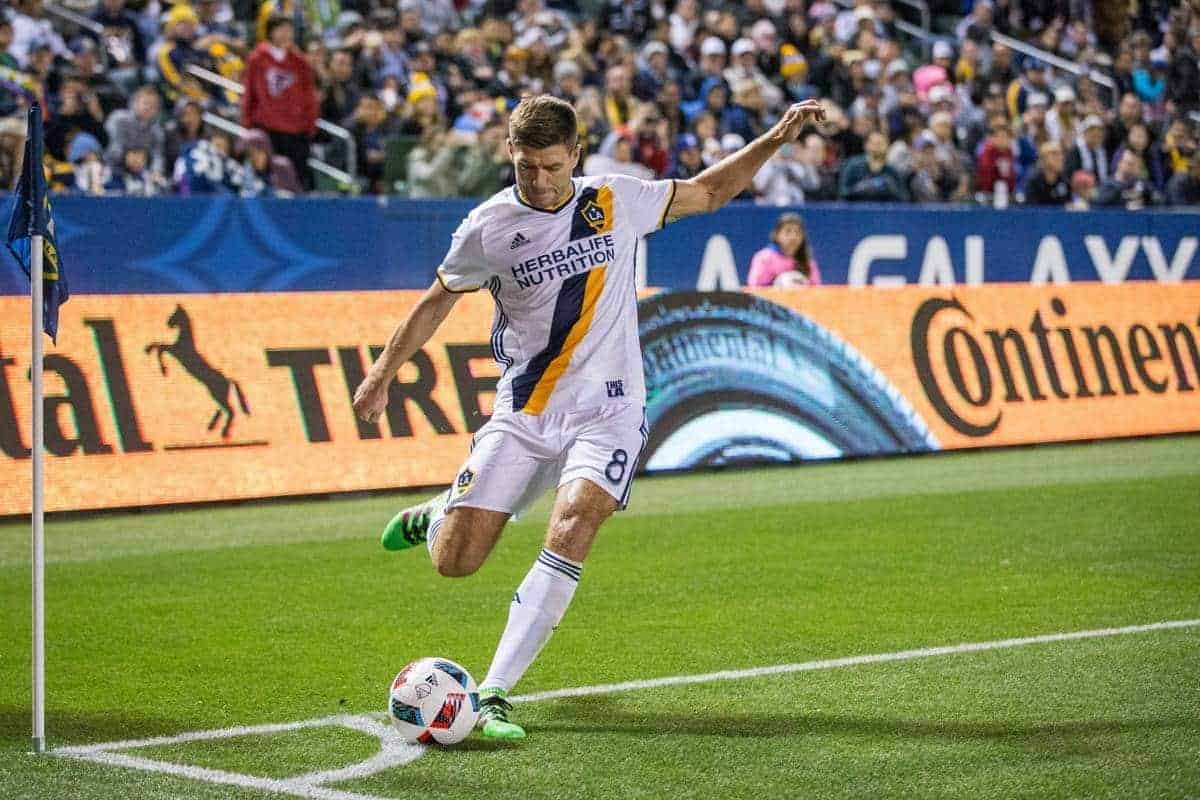 Steven Gerrard’s MLS career ended in the unlikely setting of Dick’s Sporting Goods Park in Commerce City on the outskirts of Denver earlier this month. We get the view from Los Angeles on his time with LA Galaxy.

Galaxy lost out to the Colorado Rapids in the Western Conference semi-final, with Gerrard the only one of four LA players to score from the spot in the eventual penalty shootout.

Gerrard’s side led 1-0 from the first leg but lost 1-0 on the night, with Gerrard making his first appearance since October 2nd, arriving into the match with 10 minutes left of the regular 90.

Placing his spot-kick past former Everton keeper Tim Howard, Gerrard then saw Giovanni Dos Santos blaze over the bar, before Ashley Cole and Jeff Larentowicz had theirs saved by Howard.

That Gerrard’s 18-month American adventure ended in the altitude of the Mile High City is perhaps ironic, with the former Liverpool captain having spoken of his surprise at such different climates after his first six months in MLS.

“Going on the road, playing on turf, playing at altitude, playing in humidity, those are the hurdles that I’ve had to face over the last three months that I wasn’t aware of,” he said after Galaxy’s first-round play-off defeat a year ago. “Every away game has a different challenge.”

Quite how Gerrard was so unprepared for the different complexities of life in MLS is bizarre, given he had friends Robbie Keane and David Beckham to speak to before agreeing his move.

Gerrard admitted he’d never visited LA before agreeing the move in January 2015, but perhaps he should have done some basic research.

Perhaps this is why Gerrard struggled to adapt to life in MLS. The 36-year-old has spent the last week enjoying the California lifestyle with friends but posted a farewell message on Instagram over the weekend, saying: “Special place incredible view I will miss you LA.”

Galaxy have now confirmed Gerrard’s departure and the player says he’s “got options on the pitch and off the pitch” and that he will return to England to decide his next challenge in his career.

We spoke to Mark Hornish, who covers Los Angeles Galaxy for SBISoccer, to get his views on Gerrard’s time in California.

How has Gerrard’s time with LA been perceived by Galaxy fans?

MLS fans have always had a complex about overpriced European veterans coming to MLS to earn an easy paycheck while giving little to the club they profess to care about. Gerrard will probably be seen in this light.

While it was obvious to close observers that Gerrard’s health was the factor keeping him on the sideline, not his fitness or his desire, nevertheless, he will be regarded as yet another expensive failure in a long line of such players, both in Los Angeles and in North America in general.

Why, then, has Gerrard’s time not been a success?

The Galaxy won three MLS Cups in the five years prior to Gerrard’s arrival. Since he signed with the Galaxy, they’ve won exactly zero.

Nothing less than a Championship is acceptable for this organisation, and that was the expectation for Gerrard. He didn’t even come close. Hell, he barely even played soccer, let alone delivered Cups.

The numbers don’t lie. Gerrard made 36 appearances out of a possible 59 in his year and a half with the club. No other numbers matter. He simply wasn’t available for selection nearly enough to make a difference on the pitch, or merit his enormous salary off it.

What would be Gerrard’s best moment for Galaxy?

The cynic in me would say “when he gets on a plane back to England, and releases his $6.5 million dollar salary back to the club.” The realist in me would say “the day he arrived, and the soccer world turned it’s attention to the Galaxy, if only for a brief moment.”

Stevie had a few good games for us, a few mediocre games for us, but at the end of the day, the operative word would be “few.” It was just to few appearances at all.

Gerrard is expected to be one of many changes at Galaxy this winter, could manager Bruce Arena leave too?

The Galaxy once again face a cloudy future, with yet another massive overhaul almost certain. The Galaxy are expert at manipulating the labyrinthine rules of MLS salary cap restrictions, but that won’t change the fact that many of their most notable players have already departed.

The Galaxy’s development program is well known as one of the best in North America. They are so strong that two years ago they formed a USL (America’s 2nd division) team called Galaxy II simply to get playing time for their army of young prospects who faced little hope of seeing the pitch with the senior team due to the presence of high-priced veterans like Nigel DeJong, Robbie Keane, Ashley Cole, Landon Donovan, and Steven Gerrard. Now, DeJong and Gerrard are gone, Donovan will almost certainly go back into retirement, and, somewhat shockingly, murmurings have begun that even team captain Keane, who has been by far their most productive attacking player over the past four-plus seasons, may also depart.

It would seem an easy fix to plan to play all the young talent the Galaxy have waiting in the wings, but that is unlikely due to two factors. First off, the Galaxy need to fill seats. Their financial structure depends on remaining one of the highest-attended, and highest-profile teams in the league. While Gerrard may have been unproductive, fans are far more inclined to break out their wallets for tickets and shirts for Gerrard than they are for Rafael Garcia. (Question: who is Rafael Garcia? Answer: Exactly)

This is why the Galaxy may stick with Giovani Dos Santos as the core player of their squad, and possibly let Keane go: Keane is better, especially as a leader, but Dos Santos, with his ties to the Mexican National team and the gigantic Mexican-American community in Los Angeles, fills more seats and sells more shirts.

In addition, Bruce Arena, for all his success, adores veteran players almost to a fault. If he is told “sorry Bruce, we’re not buying you any high priced Euros this year, you’ll have to make due with what we’ve got in the academy,” that is what would most likely convince Arena to retire. As maddening as it must be for Arena to face the prospect of another off-season trying to find half a dozen quality starters, it would be worse for him to have to play a bunch of kids that make a lot of mistakes. But the job is his unless he says otherwise.