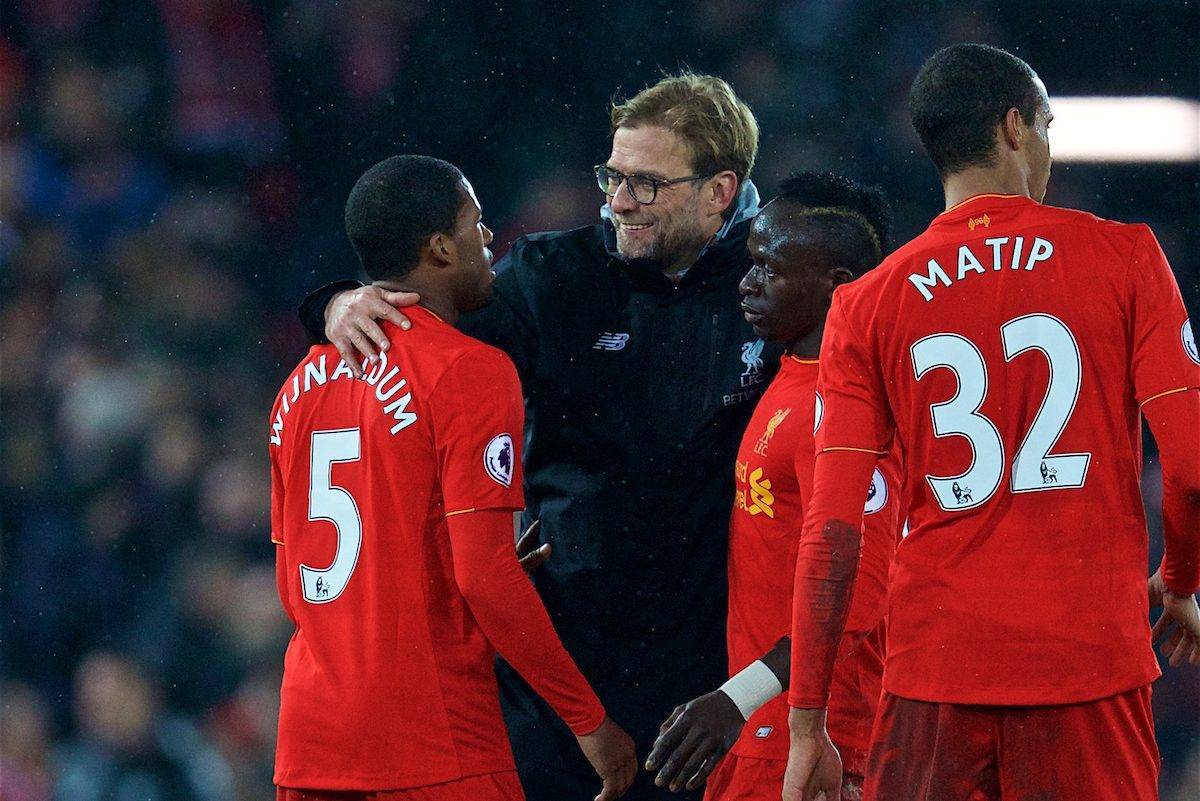 Liverpool bounced back from their FA Cup exit with an encouraging 1-1 draw against Chelsea at Anfield on Tuesday.

Sadio Mane made the bench after returning from Africa Cup of Nations duty but Daniel Sturridge and Divock Origi failed to make the starting XI.

Nathaniel Clyne was also passed fit despite not featuring in Liverpool’s two cup defeats against Southampton and Wolves.

Liverpool started off with intensity and direction in the opening stages but Thibaut Courtois was rarely troubled as Chelsea defended with solidity.

The Reds were dealt a blow when a controversial free-kick was put away superbly by Luiz after 24 minutes to give Chelsea the lead.

Fans were becoming frustrated as Liverpool lacked threat in attack but Wijnaldum’s goal shortly after the half-time break lifted them.

The Reds continued to search for a winner but Chelsea were awarded a penalty in the second-half which threatened to put the game to bed.

Simon Mignolet made up for his earlier error by producing a fine save to deny Diego Costa but Liverpool had to settle for a 1-1 draw despite an exciting final few minutes.

Yes, ref blew his whistle. Shocking concentration from Mignolet. Shouldn't have been a free kick, but no excuse for switching off

I knew they'd get revenge for Aurelio's free kick eventually!

That goal was 100% down to Mignolet not paying attention & Sideshow Bob caught him with his pants down. Still time to turn it around #LFC

One of most well spurned chances I've seen that, from Firmino.

Mane’s introduction produced one of the biggest reactions…

Sadio Mane bringing back much needed balance to our right hand side already.

Mane to score the winner.

But when Mignolet saved Diego Costa’s penalty fans were ecstatic…

Good save by Mignolet who benefitted from looking at the shot as it was taken. That could catch on.

We love you now mignolet ?

Great save Migs. About time we had some luck in this match!

That is a great result for #LFC. Coming from behind against that opponent after the recent run is huge. Have to build on this now.

Good point following a bad spell. Firmino had the chance to steal all three points for us but today was much better from Liverpool.

I will take that. Really spirited second-half. Still a LONG way to go this season. Henderson MOTM by far for me.

Still unbeaten against the top 6.

Once again it's an inability to convert chances, open and easy chances, that costs 2 points

It's a point picked up where other teams dropped them, no matter what chanced were missed. Good results all things considered

Spirit's back, Mane back, Coutinho getting fitter and 1 point off 2nd. Light at the end of the dark tunnel of January.

The worst of months we've had in January and we are still 4th. good result to stop the rot, onto the next game. ynwa