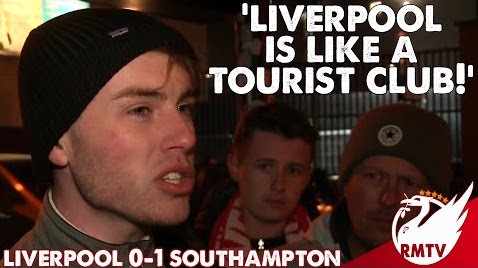 A Liverpool fan has passionately discussed the change in demographic of those who attend games at Anfield, particularly after the increase in hospitality numbers in the new Main Stand.

Speaking after the Reds crashed out of the League Cup to Southampton, a local fan described the problems on fan TV channel The Redmen TV outside the ground.

The local fan gave an honest, heartfelt opinion of how the matchday demographic has changed.

He starts by discussing empty seats in the ground, in hospitality areas – for a cup semi-final – before describing the current top-six sides as “tourist clubs”.

The dreaded selfie sticks get a deserved mocking, as do the supporters who choose to leave their seats before half-time and full-time.

Everything that is said is spot on, to be fair, and while Liverpool must keep up with their rivals when it comes to revenue, there has to be a balance and not losing the soul of the club and its fanbase.

“When you look in English stadiums especially, so many tourists haven’t any connection to the club they support. They’re just customers.

“But as a football club you also need fans, you need people who say, ‘OK, now my club is ruined or we have been relegated, but I love this club.

“They could play it in China.”

Perhaps, if Jurgen Klopp wants a better atmosphere at Anfield, he needs to speak to those in the club’s hierarchy about what they can do to improve it.

Let us know your thoughts on the Anfield atmosphere, and how you think matchdays have changed over the last decade or so.