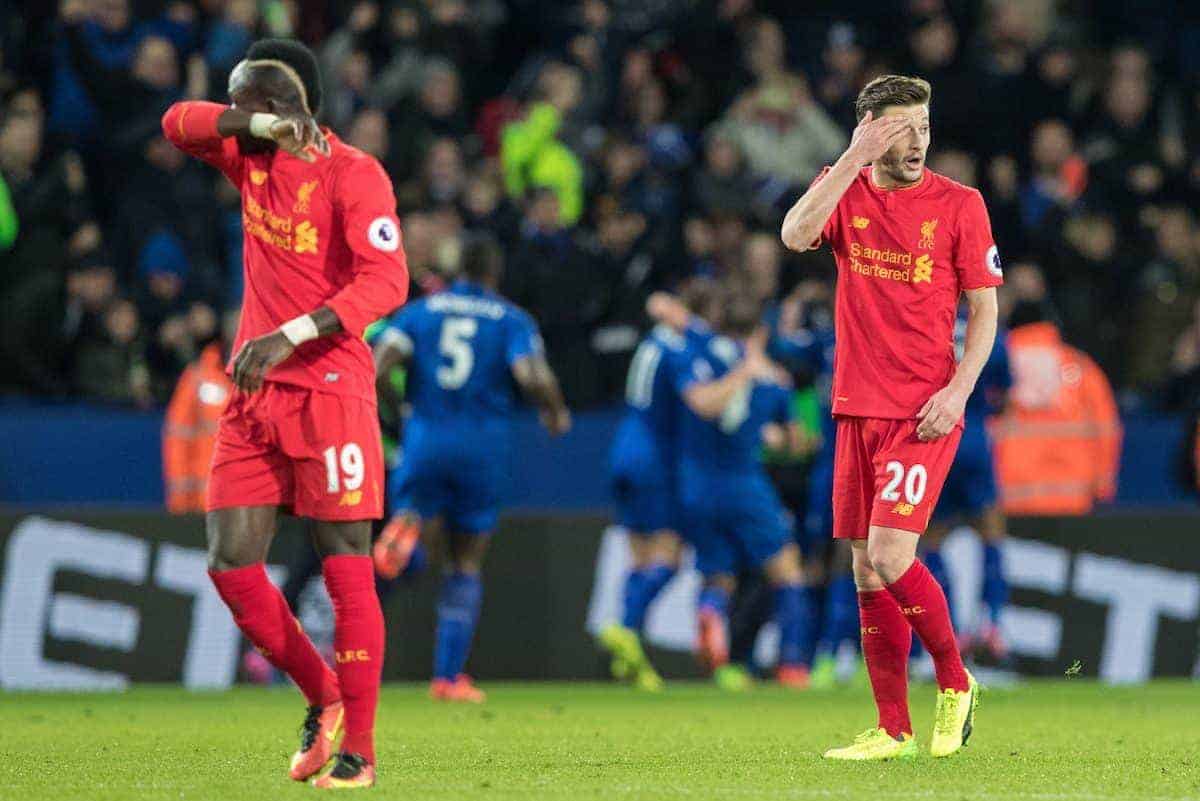 Liverpool marked a long-awaited return to Premier League action with a woeful 3-1 loss at Leicester, further jeopardising their top-four push.

It just had that feeling about it all along.

Even with a full 16-day break to prepare after one of the performances of the season against Tottenham, Kopites always feared the King Power Stadium trip would prove another banana skin game.

And how that proved the case as the Reds slumped to a fifth league loss of the campaign—a fourth against a team coming into the game occupying a space in the relegation zone.

Just as after seeing off Man City and producing positive showings against Man United and Chelsea in January, the Reds followed up a big-game success with a costly slip-up against strugglers, bottling a big chance to stamp authority on the top-four race.

Gifting soft goals via the same failings and whimpering to defeat, Klopp’s side failed to deal with the pressure of being expected to carry the fight and to deliver at a time victory was paramount.

The nature of another spineless performance when under pressure to perform showed the weak mentality that is engrained in the current squad—which will continue to plague progress until it improves.

Can Uninspiring in Henderson’s Absence

All eyes were on Emre Can as he deputised for the injured Jordan Henderson shielding Liverpool’s defence, but the German will hope to have gone unnoticed on another night to forget.

Can was way off the pace and failed to step up at the King Power, where he was slow in and out of possession as he failed to close space and protect the Reds’ centre-backs, who were exposed to through passes all evening.

Can was far from the only offender, but that he was one of the biggest caused a huge issue for Liverpool, as he failed to set the tempo with energy from the middle of the park.

Indeed, it showed how much Henderson’s crisp distribution and athleticism—that so often provides the catalyst for the Reds to take control—was missed, and the skipper’s foot injury presents an extremely worrying concern.

Can had the chance to prove he’s the right man to deputise while Henderson is out, but that he looked better as a third centre-back in the second half—from where he marauded forward and laid on Philippe Coutinho’s consolation—provides no confidence he can provide.

Klopp may have to quickly find an alternative ahead of Arsenal‘s visit.

After an impressive showing against Tottenham, Klopp kept faith with his stand-in Brazilian.

But that move backfired spectacularly as Lucas Leiva himself epitomised the very decline in performance Liverpool suffer from big occasions to routine fixtures, following up a strong showing with a dire defensive display against the Foxes.

The veteran was woeful positionally and was visibly panicked by the threat of Jamie Vardy, who predictably and ruthlessly exploited the Brazilian’s embarrassing lack of pace time and again.

Lucas was completely unaware to space around him and in particular Vardy’s movement throughout—displayed in the first goal in particular—showing that he simply lacks the nous to play at the heart of defence, and shouldn’t play there unless it is absolutely unavoidable.

That it was avoidable here and he still played even with Ragnar Klavan fit was the wrong move from Klopp, who must restore the Estonian against Arsenal. Not for the first time this season, Klopp resorted to switching to a three-man defence in attempt to solve his side’s problems.

Changing to a 3-4-2-1 formation at half-time didn’t inspire the turnaround hoped for, but it at least proved effective in earning the Reds a foothold in the contest, and offering a glimmer of hope in staging a fight-back through Coutinho.

Most notable from the changed shape however was the imbalance and lack of flexibility of the squad, which lacks quality and players needed to have such a switch as a genuine go-to option at such times.

Though partly to be expected in an ultimately desperate attempt to rescue the game, players were out of position all over the pitch—Can and Lucas in the back three and James Milner in central midfield most notably.

Though with a bit more impetus in the game, the Reds looked like 11 individuals thrown together learning as they went along as opposed to a team selected to represent Liverpool Football Club.

Another Big-Game Performance Required vs. Arsenal After failing to back up a big-game success against strugglers once more, chucking away a huge chance to stamp authority on the top-four race in the process, Liverpool have to do it all again against the Gunners.

Performances like this make you wonder just how it’s possible to be so good against direct rivals, but the key thing is Liverpool have continually succeeded on such occasions, seeing off Chelsea, Tottenham, City and Arsenal back in August.

Like against Tottenham, Klopp’s side need a big performance to kick-start the chase for Champions League football and have any hope of actually finishing in the top four, and they certainly owe it to Kopites after the woeful display here.

There’s a whole load more pressure on the meeting with Arsene Wenger’s side now though, and the Reds will have to deal with it better than they did a different kind of pressure at Leicester.