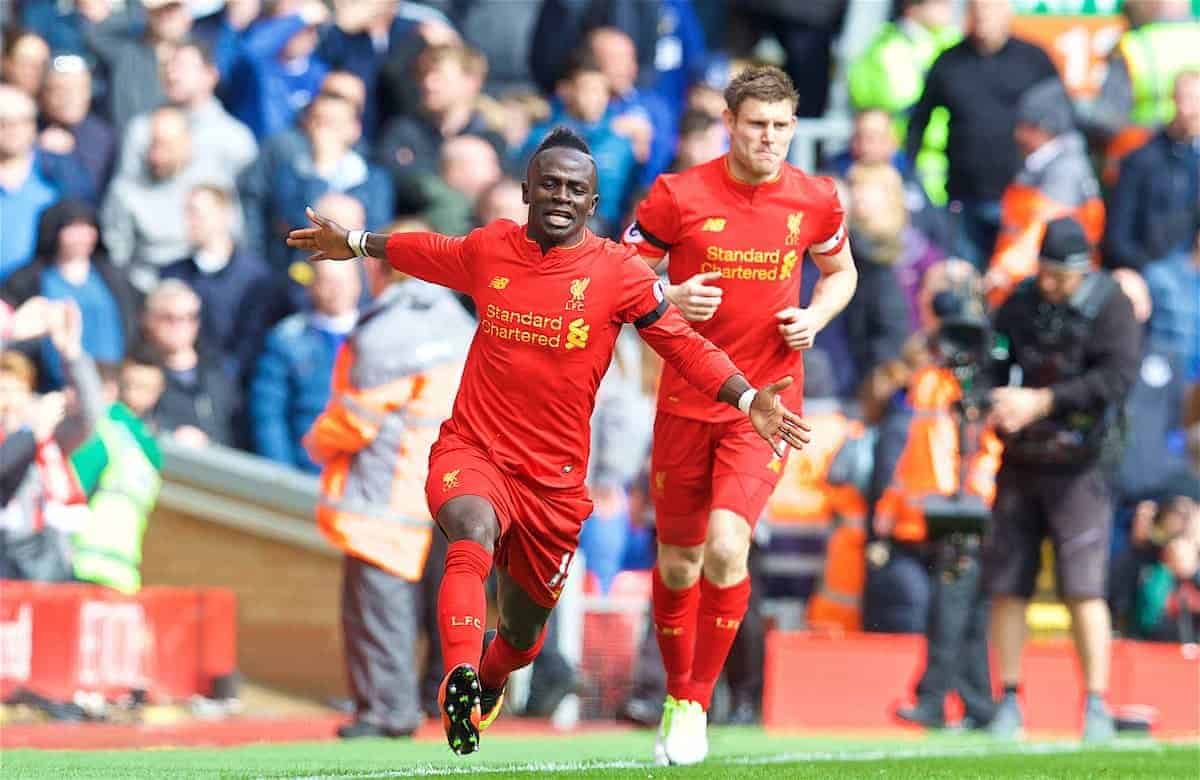 A heated Merseyside derby saw three goals from the Reds, and surprisingly no reds for the opposition, with some impressive Liverpool performances.

Had very little to do in the first half, and couldn’t really do anything with the goal Everton scored from a corner.

Had some saves to make in the second period though, collecting easily from Ashley Williams’ tame effort, and then diving to stop Mason Holgate’s shot.

It was a fairly quiet day for the Belgian stopper thanks to a combination of good defending in front of him, and the occasional squandering of chances by the opposition.

Was involved in a battle against left wing-back Leighton Baines, which kept him occupied in the first half and limited his own game.

He sent in a good cross for Divock Origi later in the match which Joel Robles was only just able to gather, and showed pace to get to the ball in the first place.

Effortlessly gets in the way of things, and during one period in the second half he was making a clearing header one minute, and blocking the ball back in shortly after.

Easily brushed off Dominic Calvert-Lewin when he had to. A majestic centre-back, both on the ball and off it. Involved in a physical battle with Romelu Lukaku and won plenty of aerial battles throughout.

Not afraid to stick his foot in where it hurts; this almost cost him when Ross Barkley planted his studs straight on his ankle and somehow got away with only a yellow card.

Should have been more alert at the corner from which Everton scored as Williams got ahead of him, but he wasn’t the only one sleeping on this occasion.

Made a great recovery tackle on Lukaku as the Belgian broke in the second half, prompting huge cheers around Anfield.

An up-and-down performance from the captain.

Made some good interventions along the left-hand side, but was also sloppy with his passing on occasions, finishing with a pass success of just 74 percent.

Put in an important block on a Holgate cross in the second half, when he was an important part of the team as they secured the three points. Heavily involved on his return to midfield. Lost Barkley on a couple of occasions and gave away the odd free-kick, but did enough in the deep-lying role to help the team.

Won his fair share of aerial battles—nine to be exact—which is still a strength of his in the position.

Will be happy to get an assist for Philippe Coutinho‘s solo effort, but this Brazilian-Scouser will be happier that he could help his team to a derby victory.

Was asked to step forward from the deep-lying role he’s been playing in recent weeks, and he stepped up in more ways than one.

Repeatedly fouled early on in the game, he took it upon himself to be heavily involved in the midfield battle.

Went a bit too far when he tracked back to foul Barkley on the edge of the area, but he was then in the wall to block Baines’ free kick.

Took a couple of dangerous looking shots from distance, but these were blocked.

Like Lovren he should have been more aware of those around him as Everton scored from a corner in the first half, but overall it was a good performance from the German.

Unusually peripheral in the first half when he had just 25 touches of the ball.

Came to the fore in the second when he was needed to take control of the midfield, especially after Coutinho was taken off.

Was often seen pressing very high up the pitch in these latter stages, and he worked hard right until the final whistle.

Always a threat when he managed to get on the ball, and also tracked back in defence when needed to help Clyne with the threat of Baines.

Opened the scoring within the first 10 minutes, surging through midfield from the right, playing a one-two with Roberto Firmino before sliding a left-footed shot into the bottom corner.

Was taken off just before the hour mark with what looked like a knee injury, after a tangle with Baines. He will be a big miss for Liverpool in the run-in, if this is to be a long layoff.

Not outstanding himself, but played in important part in the attack, acting as the focal point for Mane and Coutinho to play off.

Dropped to the right once Mane left the field, but continued to link play as he had done previously.

Was then asked to play on the left when Coutinho was taken off with 15 minutes to go, showing his versatility and importance to the team before being withdrawn himself in injury time.

Carried his good form for Brazil into his club football, operating in tight spaces against a packed Everton defence, whom he constantly fooled with his quick feet.

Made an important run for Mane’s goal, dragging defenders away from his team-mate as he ran towards the area.

Scored Liverpool’s second with an excellent solo effort, making some space for himself cutting in from the left before curling the ball precisely into the far corner.

Repeatedly embarrassed opposition defenders with his skill and invention, and they will have been glad to see the back of him when he was taken off later in the second half.

If Everton thought Mane’s exit would give them some respite, then they were wrong.

Origi ran directly at the defence, also holding the ball up well when needed.

Within minutes of coming onto the pitch he was taking his first shot on goal. It went over, but acted as a sighter for his second effort which found the back of the net.

Took up a position on the right of the attack where he was asked to support Clyne but also get forward.

He was able to drift into the centre to get on the end of an Can pass, but his shot was saved by a fully stretched Robles. Klopp’s big decisions prior to the game were to select Lovren ahead of Klavan, and Lucas in midfield to make up the numbers in Adam Lallana‘s absence through injury.

Both moves will have been questioned by fans prior to the game, but they paid off as the two players involved put in good, passionate derby performances.

The manager was forced to shift his side around when Mane left the field injured, but his choice of replacement paid immediate dividends as Origi sealed the win shortly after coming on.

He’ll have more decisions to make in the coming weeks, especially if Mane is out for a number of games.