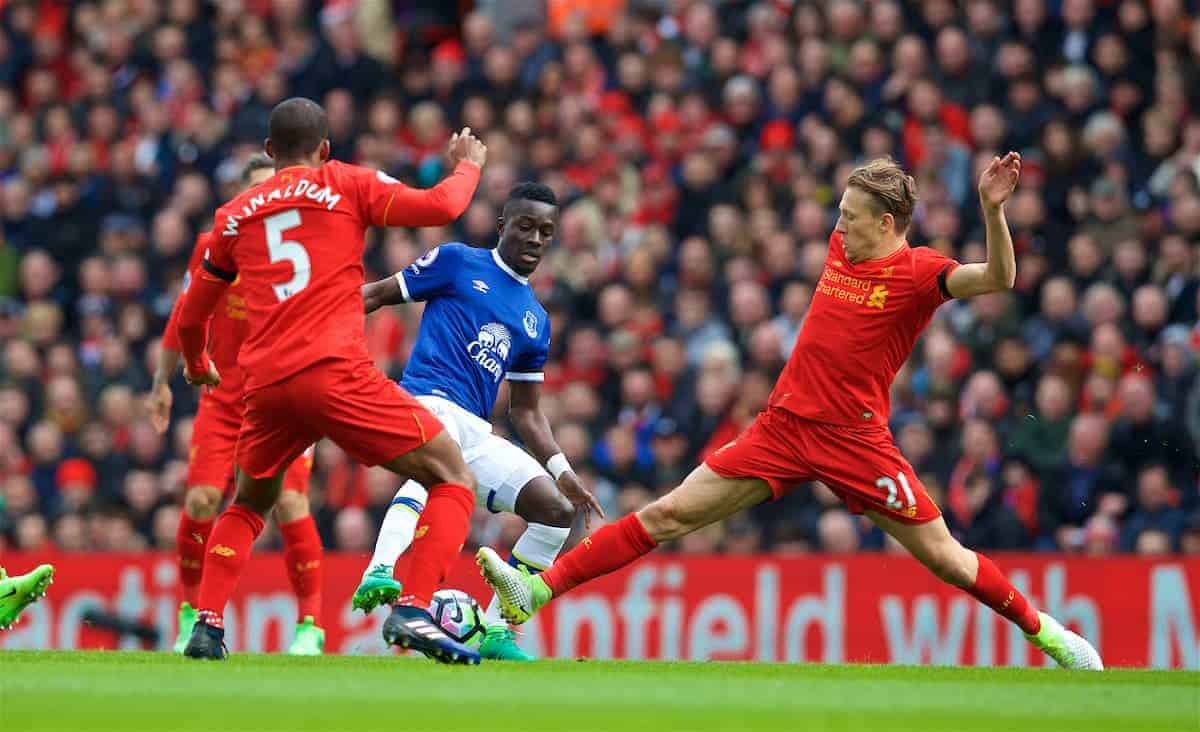 Liverpool’s dominance and winning of the midfield battle proved a pivotal factor to the Reds continuing their Merseyside derby supremacy at Anfield.

It’s often said in the build-up to big games how the contest will be decided by which team ‘wins the midfield battle’.

In truth, it ends up not being the case almost as regularly as the cliché is trotted out, but despite the brilliance of Philippe Coutinho inspiring victory, it certainly was in Liverpool’s latest derby-day success.

While the Reds were superior to Everton all over the pitch, it was the domination of the midfield tussle that proved crucial to ensuring of another miserable Anfield trip for the Toffees.

Crucial to winning any midfield war is coming out on top in the individual battles.

The Reds’ combative, physical and energetic trio of Lucas, Emre Can and Georginio Wijnaldum unequivocally won them all against their Blue counterparts.

There was an element of nervousness when team news broke and it was revealed Lucas was Jurgen Klopp’s chosen man to replace Adam Lallana, completing a central trio that looked short on creativity.

The Brazilian’s lack of mobility against Ross Barkley presented a concern, but Lucas – who won the same amount of tackles as Everton’s central midfielders combined – relentlessly swarmed the Blues’ No.8 to deny him the influence some feared he may enjoy.

Every time Barkley had possession Lucas hounded him to either force him back or simply win the ball off him – which the Scouser grew frustrated by as evidenced by another cowardly derby-day tackle, this time on Dejan Lovren.

With Lucas bossing Barkley, the excellent Can commanded control of Idrissa Gueye and Tom Davies, simultaneously at times, as the German relished the greater freedom afforded by his altered central role.

Time and again the Dutchman arrived with perfect timing to back up Lucas and Can’s ball-winning efforts, allowing him to collect loose balls before escaping the visitors’ central figures and setting the Reds on their way. Winning the scraps in the middle of the park is essential but it’s only useful if the advantage is used to dominate proceedings, and the Reds’ midfield certainly did.

With Lucas setting the tone, Klopp’s men quickly seized control which settled the team down and allowed Liverpool to play their natural game.

Key to this was the screening job Lucas executed to cut Everton’s route to Romelu Lukaku, leaving the Belgian isolated and with nowhere to go to escape the attentions of Joel Matip and Lovren.

The ease in which the Reds’ trio continually won possession before quickly supplying forward passes to bring the attacking trio into the game – which Lucas also impressed with – was crucial to establishing attacking momentum.

Liverpool’s efficiency on and off the ball ensured Coutinho, Sadio Mane and Roberto Firmino – supported by Wijnaldum – could stay high and close together, helping them to swiftly expose the Blues’ defence in rewarding one-against-one situations.

And how the former duo did with two stunning individual goals – the first of which Lucas started with an incisive pass into Mane who eventually finished.

Even when Everton did have a spell – in which they equalised – you felt it was more to do with the Reds’ trio catching their breath and that once they had, dominance would recommence as happened.

But arguably the most pleasing aspect of the complete midfield performance was Liverpool’s sheer physical domination of the Blues.

Klopp’s men have rightly been criticised for shirking the physical contests, bullied out of games when required to mix it.

But it was the Blues’ midfield who lacked heart for the fight, with Lucas and Can particularly commanding.

Bill Shankly famously changed Liverpool to an all-red kit in 1964 citing the intimidation the striking jersey provided, and from the upper tier of the Main Stand you could see the Anfield legend’s intentions from all those years ago ring true as Klopp’s team simply looked the more imposing. It was fantastic, if not unexpected, to see the Reds’ midfield dominate such a high-pressure game so convincingly, especially with the match being an early kick-off after an international break.

But now in the business end of the season when big performances will be required in every match, such displays must be produced by the game.

Having finished the season unbeaten against the Premier League’s top seven with the aid of some excellent midfield performances, the challenge for Klopp’s side is to translate these against weaker opponents.

The intensity, quality and aggression shown on Saturday would undoubtedly prove too much for the teams we have left to play over the last eight games.

Bringing the same attitude to those fixtures will be vital, and Klopp’s side have to treat the looming contests with Bournemouth and Stoke with the same mindset as the derby.

If similar showings are produced, dominant performances will arrive, wins will follow and Champions League football will be secured.