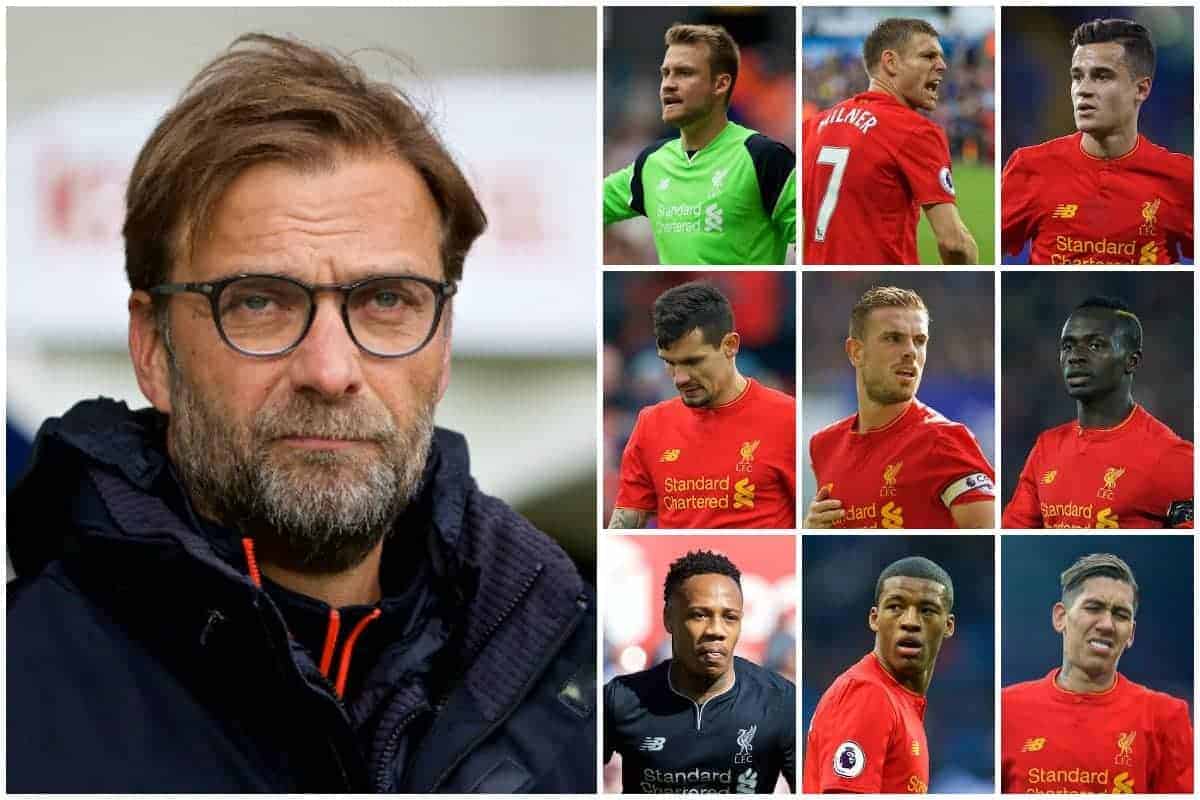 Liverpool have a number of different positions in need of reinforcement this summer, but which should be Jurgen Klopp‘s priorities for the window?

The Reds are still fighting for a top-four finish in the Premier League, and their success or failure in pursuing the Champions League will impact their summer prospects.

But either way, reaching Europe’s elite or being forced to settle for the Europa League will prove Klopp’s squad needs strengthening.

Every week suggests a different weakness on Merseyside, with injuries and poor performances underlining a fragile squad that requires additional recruits in order to compete at the top.

So where does Klopp need to strengthen most? And what can he be content with?

Realistically, right-back is the safest position in Klopp’s squad, with Nathaniel Clyne playing the full 90 minutes in all but one of his 33 Premier League appearances this season.

The 25-year-old came under criticism at the beginning of 2017 for a perceived lack of end product, but his defensive stability and remarkable fitness make him a guaranteed starter for years to come.

With Trent Alexander-Arnold making swift progress in his role as Clyne’s deputy, Klopp should have the right-back slot covered for the long term. With Philippe Coutinho, Roberto Firmino and Adam Lallana established as key players, and Marko Grujic and Ovie Ejaria breaking through, Klopp is well stocked in terms of attacking midfielders.

Though Firmino typically operates up front, Lallan deeper in midfield and Coutinho out wide, if required the German has a plethora of options to take up a central berth—particularly if he opts to change formation.

Arsenal midfielder Alex Oxlade-Chamberlain has been linked with a move to Anfield in the summer, but it is likely the 23-year-old’s versatility that has attracted Klopp.

Klopp is seemingly eager to add another midfielder to his ranks ahead of 2017/18, with RB Leipzig dynamo Naby Keita on Liverpool’s radar.

But with Lallana, Grujic and Ejaria joining Emre Can, Georginio Wijnaldum and Jordan Henderson in being able to take up the knitting roles in Klopp’s 4-3-3, it is arguably low on his priorities.

Given injuries to Henderson, Grujic and Ejaria this season, however, it could be that further depth is required to compete on four fronts next term.

Adding another striker to his ranks should be on the agenda for Klopp by default, with Daniel Sturridge set to leave the club at the end of the season.

If Sturridge does depart, with Paris Saint-Germain interest, Klopp should target an additional centre-forward to supplement his current options of Firmino and Divock Origi.

He does, however, have Danny Ings still on the books, while Ben Woodburn and Rhian Brewster are coming through the ranks, but a more stable, proven option will be required in 2017/18.

Despite Klopp seeking to set the record straight in a recent press conference, declaring “we have the highest quality goalkeepers,” there remains debate about Liverpool’s man between the sticks.

Simon Mignolet has certainly enjoyed a resurgence in the closing months of 2016/17, but doubts linger about his long-term form, while Loris Karius and Danny Ward remain largely unproven.

Nurturing Karius and Ward as his options for the future would be wise, but Liverpool’s goalkeeping problems could be solved by the addition of a new No. 1 stopper this summer. Jordan Henderson, captain of Liverpool and Klopp’s first-choice No. 6, has failed to make 30 appearances in all competitions for two consecutive seasons.

Elsewhere, Can is yet to agree an extension for a contract that expires in 2018, Lucas Leiva is considering his options after another season in a squad role and Kevin Stewart is due to depart.

Liverpool are short of established, top-level options at the base of the midfield, and signing a snarling, bruiser-type should be high on Klopp’s priorities.

James Milner‘s conversion into a left-back, and his subsequent consistent form, has been hugely admirable, particularly with his misgivings about taking up the role.

But at 31, and having shown signs of fatigue on the turn of the year, it is clear that the former Man City winger is not a long-term solution, while Alberto Moreno‘s days are numbered.

Fulham teenager Ryan Sessegnon is Klopp’s prime target, to initially serve as backup to Milner, but a more experience option like Schalke’s Sead Kolasinac would be more suitable.

For two stretches this season, Mane’s absence has been hugely detrimental to Liverpool’s hopes, firstly while at the Africa Cup of Nations in January and now ruled out with injury.

Without Mane, Klopp has been forced to alter his formation and deploy the likes of Lallana, Wijnaldum and Firmino out of position, and it is clear he is lacking genuine options out wide.

Replacing Mane is a difficult task, as he is a winger with world-class potential, but finding alternatives, such as Roma’s Mohamed Salah and Athletic Bilbao’s Inaki Williams, will be crucial.

Joel Matip has started 23 games in the Premier League this season; Dejan Lovren has started 25; and both have struggled for consistency as a result.

While Matip’s addition was a positive one for the Reds last summer, the likes of Lovren, Lucas and Ragnar Klavan are far from the level required as a first-choice centre-back for Liverpool.

Joe Gomez certainly has potential, but signing one or two starting centre-backs is essential this summer, with Southampton‘s Virgil van Dijk and Burnley‘s Michael Keane a fine starting point.