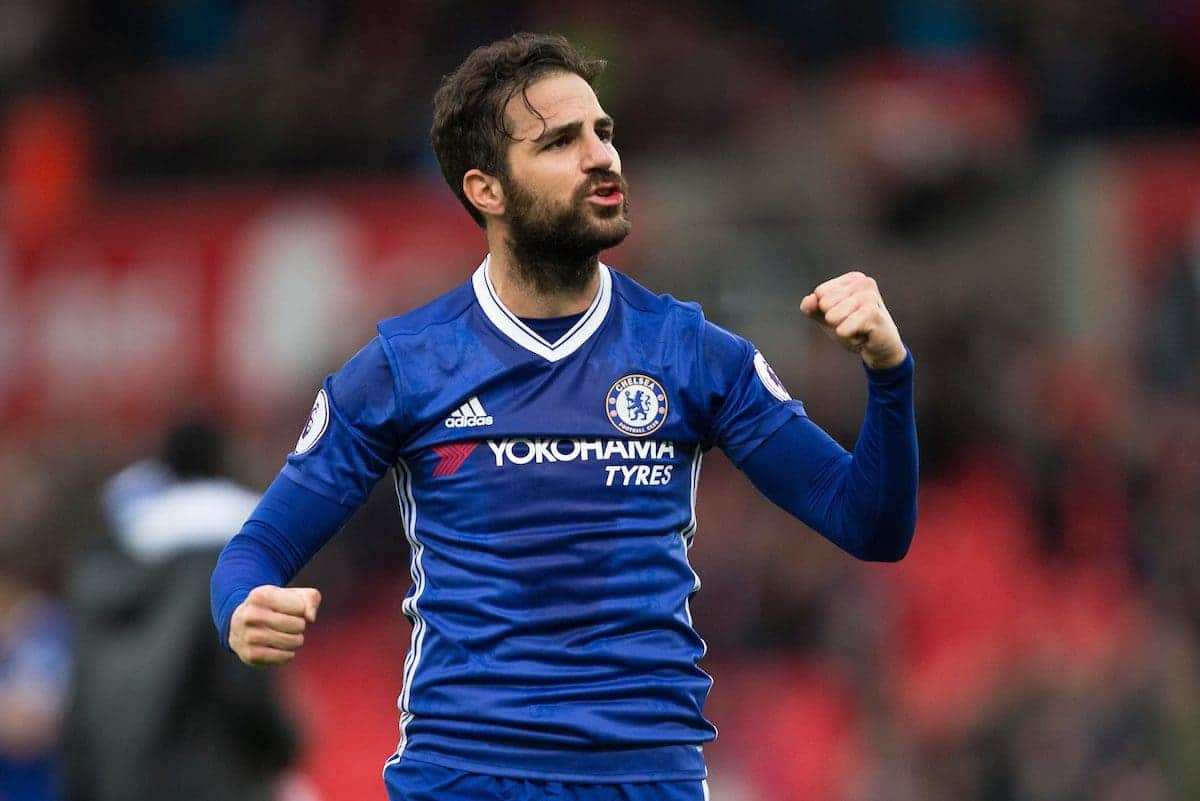 Liverpool are claimed to be interested in signing Chelsea midfielder Cesc Fabregas this summer, if the Blues decide to sell the Spaniard.

Fabregas has taken up a peripheral role for the title contenders this season, playing just 1,047 minutes in the Premier League, finding himself at odds with Antonio Conte’s system.

The 29-year-old was heavily linked with a move to AC Milan ahead of the January transfer window, but remained at Stamford Bridge.

However, it seems likely he will leave Chelsea at the end of the season, when he enters the final two years of his contract, with clubs lining up to sign him.

According to the Express, who claim an exclusive, Liverpool will be among Fabregas’ suitors.

They would join Milan, Inter Milan and Man United in pursuing the Spain international, with Jurgen Klopp said to be interesting in Fabregas’ “midfield know-how.”

This comes with Lucas Leiva set to depart and Jordan Henderson facing regular injury issues, while the ex-Arsenal midfielder is even mooted as a replacement for Philippe Coutinho.

But it would be unwise to take these reports as gospel, with it highly unlikely Liverpool are interested in Fabregas.

Firstly, there is the issue of his age, as Fabregas would be Liverpool’s fourth-oldest outfield player if he were to sign, behind Lucas, Ragnar Klavan and James Milner.

But given Lucas has been with the club for 10 years, Klavan was signed for a lowly £4.2 million and Milner on a free transfer, a reported £30 million outlay for Fabregas would be out of character.

Furthermore, his wage at Chelsea is currently £170,000 a week, which would comfortably make him Liverpool’s highest earner above Coutinho, who earns £150,000 a week.

And it is certainly questionable whether Fabregas would suit Klopp’s high-intensity system given his creeping age and the demands put on the German’s midfielders.

There is little doubting Fabregas’ commitment, but to draft him in ahead of the likes of Henderson, Georginio Wijnaldum, Adam Lallana and Emre Can would be a bizarre move.

Given Fabregas’ big-name status and, crucially, Liverpool’s chances of securing their place in the Champions League next season, these reports are certainly convenient.

He is incomparable with Klopp’s other midfield target, RB Leipzig’s Naby Keita, and would serve as an ill-fitting alternative.