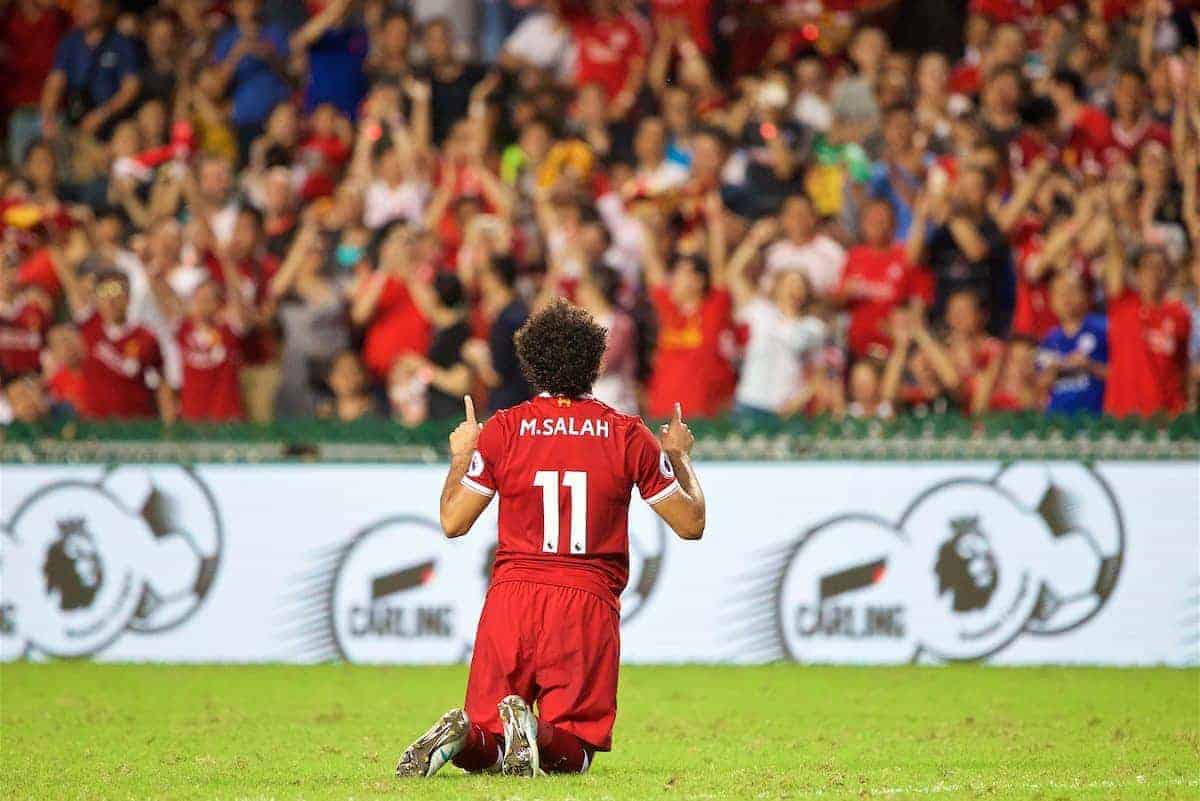 Liverpool sealed a 2-1 victory over Leicester City in Hong Kong on Saturday afternoon, stamping their name on the Premier League Asia Trophy.

After Wednesday’s 2-0 victory over Crystal Palace, the Reds took on Craig Shakespeare’s Leicester in the ‘final’ of the Premier League Asia Trophy.

Heading into the clash with a cloud over Philippe Coutinho‘s future, Jurgen Klopp named the Brazilian in his starting lineup in Hong Kong, adamant he won’t be sold this summer.

The 25-year-old was joined by the likes of Adam Lallana, Roberto Firmino and Mohamed Salah in a strong XI, against a Foxes side that included summer signing Harry Maguire.

Eager to round off their spell in the Far East with another victory, Liverpool took to the field hoping to seal silverware on their travels, and they found the quality required to do so. With both sides subscribing to the showcase nature of the clash, the opening stages were peppered with bursts of skill and impressive interplay, with Liverpool dominant.

It was Leicester who opened the scoring, however, with Christian Fuchs receiving an excellent reverse pass from Marc Albrighton to set the ball up for Islam Slimani to head home at the far post.

The Reds weren’t to be undone, however, and it was the magic of Salah that led to the equaliser, with the Egyptian picking the ball up on the right, before following his pass to Coutinho and heading beyond Kasper Schmeichel.

Klopp’s side gained control after Salah’s strike, though Leicester continued to threaten on the break, with Georginio Wijnaldum closest to scoring the third goal of the game on 34 minutes.

Liverpool were forced into a first-half change when James Milner pulled up with a thigh complaint, with Alberto Moreno replacing him at left-back to see out the rest of the half.

There was still time for Coutinho to have his say, though, with the Brazilian cutting inside from the left to deliver a trademark bullet strike into the far corner to make it 2-1. As with against Palace, Klopp made a raft of changes in the first 10 minutes of the second half, with the likes of Jordan Henderson, Ben Woodburn and Daniel Sturridge entering the fray.

It took time for the new-look Reds to find fluency, however, with the best opportunity of the first 20 minutes coming as the ball almost deflected into the path of Sturridge in the penalty area.

The second half trudged along at a tedious pace, with the most excitement in the first half-hour after the break coming as Marko Grujic received an arm to the jaw in an aerial challenge.

He was able to continue, however, and retained his advanced role in Klopp’s midfield, joining Woodburn in roving ahead of Henderson, who looked to exploit the darting runs of Moreno throughout.

Ryan Kent, who replaced Salah on the right flank, created the most promising opening as he surged past Fuchs and delivered a dipping cross, but Danny Simpson was there to cover.

But in the end it was the intervention of Liverpool’s star forwards, Salah and Coutinho, that made the difference.