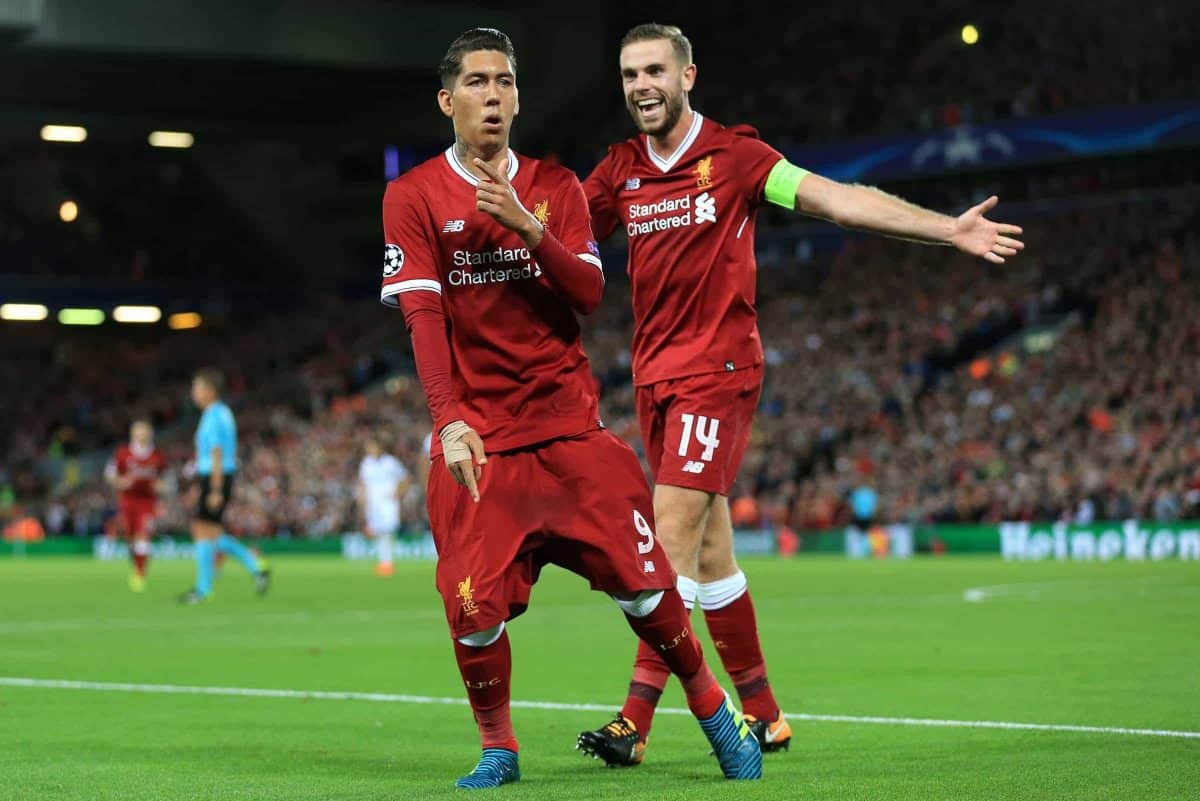 Having won 2-1 in Germany last week, it was clear that the Reds were favourites to progress, but Julian Nagelsmann’s side were not going to go quietly.

In truth, though, the Bundesliga outfit could never live with Liverpool’s stunning attacking football, on another memorable European night on Merseyside.

An Emre Can double was added to by goals from Mohamed Salah and Roberto Firmino, and some potentially heavyweight clashes in Europe’s elite club competition now await.

Here are five of the biggest talking points from Liverpool’s midweek masterclass. Firmino is not a player who is universally loved by Liverpool supporters which, judging by his display against Hoffenheim, is absolutely baffling.

Leading the line instead of being used out wide, as was the case against Crystal Palace on Saturday, the 25-year-old was sensational throughout.

Some of his touches were oozing with class and invention, as were several defence-splitting passes, and his work rate off the ball was a key reason for the Reds’ dominance.

His pass played in Sadio Mane in the buildup to Can’s opener, before his inch-perfect cross with his weaker left foot allowed the No. 23 to make it 3-0.

Firmino is a player who you sometimes have to watch closely to fully appreciate his brilliance—but against Hoffenheim, his importance to his side was as clear as day.

It is understandable why so many believe Philippe Coutinho is Liverpool’s most important player, with his on-off move to Barcelona leaving supporters tearing their hair out this summer.

While the Brazilian has been sidelined with an ‘injury’ and ‘illness’, though, Mane has shown that he has every right to be considered the Reds’ star man now.

The flying wide man has made a superb start to the season, and against Hoffenheim, there was invariably nothing the Bundesliga side could do to stop him.

Strutting his stuff out on the left-hand side, Mane was electrifying in the first half in particular: he wreaked havoc with his speed, movement and trickery, and received a richly deserved standing ovation when substituted late on.

He may not have scored on the night, but Mane was again priceless, and a strong contender for Man of the Match.

A word of praise, too, for Mohamed Salah, who wasn’t always as effective as his fellow attackers, but again showed what a brilliant signing he will be. What a front three.

With Coutinho and Adam Lallana both missing at the moment, Liverpool’s midfield trio of Can, Georginio Wijnaldum and Jordan Henderson has been criticised for being too one-paced.

All three were again named in Jurgen Klopp‘s starting lineup on Wednesday, but this time, they were exceptional as a unit, playing with far more freedom and bossing things in the middle of the park.

Henderson was the least impressive of the three, occasionally still looking rusty on the ball, but his work ethic was fantastic and he teed up Firmino unselfishly for Liverpool’s fourth goal.

Wijnaldum has taken plenty of flack for three anonymous performances so far in 2017/18, but in the Reds’ biggest game since he starred against Middlesbrough in May, he stepped up to the plate.

The Dutchman was everywhere, using his physicality to thwart Hoffenheim players and bombing forward in box-to-box style, and Salah’s goal came after he hit the post.

Can was the star of Liverpool’s midfield, however, scoring twice, putting in a wonderful shift defensively and cutting a much more mature figure, which was most pleasing.

There will be times when this trio still frustrate against certain sides, but they deserve a huge pat on the back for their efforts on Wednesday.

Lovren the One Negative…Yet Again There are times when the vitriol aimed in Dejan Lovren‘s direction can feel needless and over-the-top, but it is painfully clear that he is a continuous weak link in this Liverpool side.

On the whole, Klopp’s men were not hugely impressive defensively—it could genuinely have been 5-3 at half-time—but Lovren remained the most troubling figure.

With Liverpool cruising at 3-0 up and Hoffenheim on the verge of caving in completely, it was Lovren’s lazy pass that eventually let Mark Uth pull a goal back.

Then, with the score at 4-1 after the break, the 28-year-old was beaten in the air by Sandro Wagner, allowing him to head home and give the visitors a glimmer of hope.

Lovren can have good games, which should not be forgotten, but time and time again he is showing that he will costly his team dearly.

Just imagine the difference someone like Virgil van Dijk would make in place of him. It would have been devastating for all of last season’s hard work to go to waste over these two legs, but Liverpool delivered in highly impressive fashion.

We can now look forward to a place in the Champions League group stage next month, with Thursday’s draw essential viewing.

Liverpool again showed what a force they can be when teams come at them, and that is more likely to happen in Europe than against Premier League also-rans.

Anfield will not be a place any team is keen on visiting this season—Real Madrid, Barcelona, Bayern Munich, just you wait!