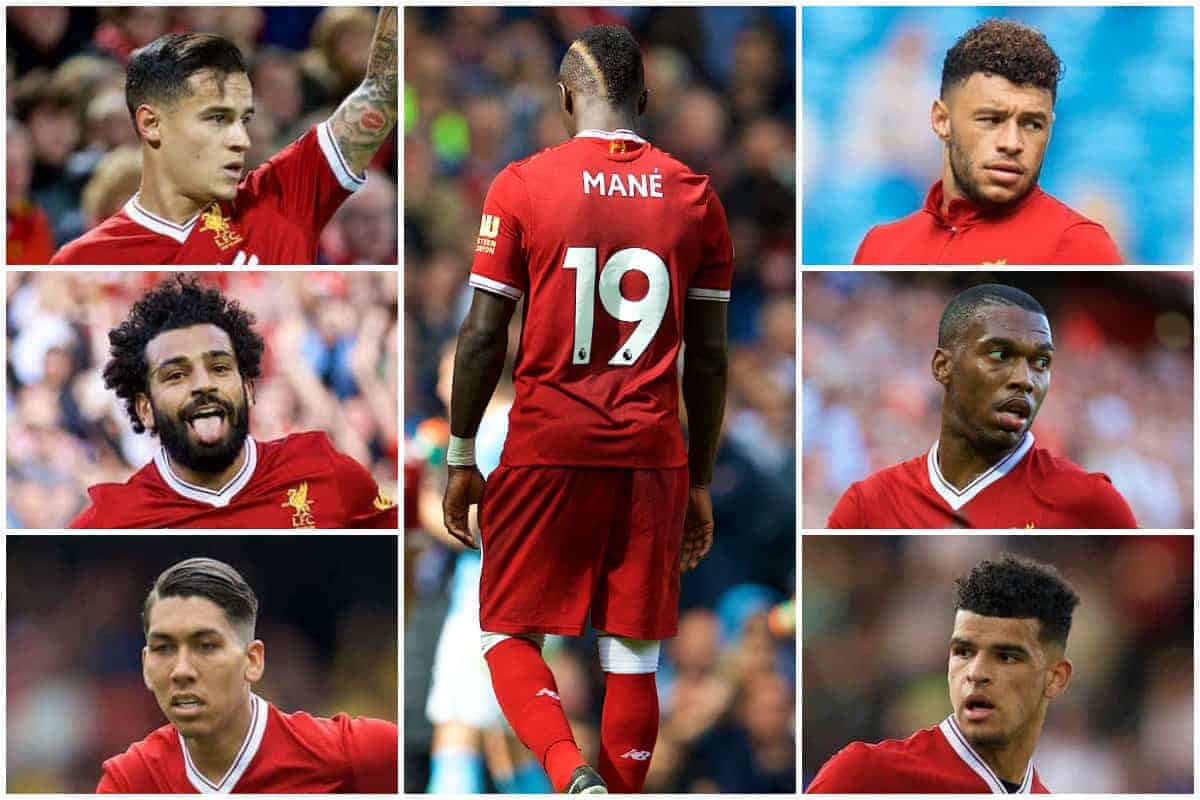 Liverpool are now without star man Sadio Mane for three games, but the Reds attacking’ options should help fill the void left by the flying forward.

Mane was again arguably Liverpool’s best player in the 2-2 draw with Sevilla in the Champions League on Wednesday, but now won’t be available until the trip to Spartak Moscow on September 26.

The 25-year-old’s unfortunate sending off at Man City last weekend sees him banned for three games, despite an appeal, and Jurgen Klopp must now make do without his key player.

He will miss the Premier League clashes with Burnley and Leicester City, and the League Cup third-round meeting with the Foxes in between.

Last season, the Reds struggled badly with Mane absent, both during January and in the spring, but there is more attacking depth within the squad this time around.

Here are some of the options Klopp could use over the next three outings.

1. A Straight Swap With Coutinho Philippe Coutinho made his long-awaited return to the side against Sevilla, although the Brazil’s late cameo was understandably rusty.

It will take some time for him to return to his majestic best, but it makes sense for him to come into the side against Burnley this weekend.

Although he is expected to feature heavily in a more withdrawn, central midfield role this season, an easy option on Saturday is to slot Coutinho into Mane’s left-sided berth.

The 25-year-old was used there last season, and with Alberto Moreno or Andrew Robertson bombing on instead of the one-paced James Milner, he can be even more effective.

In the long run, Coutinho should play centrally, but in order to make up for the loss of Mane, and keep the midfield the same, this is a good option against the Clarets. It seems strange to say it, considering what a wonderful talent he is, but Daniel Sturridge feels like a forgotten man in this Liverpool squad.

With Mane, Mohamed Salah and Roberto Firmino receiving plaudits for their brilliance as a front three, Sturridge has been limited to just one start and two substitute appearances, in all competitions.

Mane’s absence could provide the 28-year-old with an opportunity to shine, however.

Klopp could consider bringing in the England international to lead the line, shifting Firmino out to the left—a position the South American can play, albeit not always as effectively.

Coutinho can then drop into midfield at the expense of either Georginio Wijnaldum or Emre Can, bringing more creativity to the middle of the park.

Jordan Henderson could also be left out, with Can or Wijnaldum shielding the back four.

3. Salah to the Left, Oxlade-Chamberlain in Having joined from Arsenal late in the transfer window, Alex Oxlade-Chamberlain‘s Liverpool career is still waiting to ignite.

The 24-year-old had second-half cameos against both Man City and Sevilla, but on neither occasion did he have the chance to fully express himself.

With matches coming thick and fast, and rotation important, these next three games should see Oxlade-Chamberlain feature more prominently.

The versatile former Gunner is keen to be used centrally, but with no Mane around, a wide role makes more sense.

He is happy on either flank but more effective on the right, so starting him there and shifting Salah to the left is a solid option.

That allows both Firmino and Coutinho to start in the position they both crave, and keep blistering pace on both wings. Firmino is arguably Klopp’s favourite player, with the 25-year-old perfect in the manager’s system and still a vastly underrated footballer.

The workload that he gets through does take its toll, though, so it would be sensible to consider giving him a rest at some point.

That may feel like a risk with no Mane around either, but it is time for squad members to produce the goods without key men involved.

It could backfire, but Klopp may think about giving Salah a central role, with Coutinho on the left and Oxlade-Chamberlain on the opposite flank.

The Egyptian’s pace and movement could be a nightmare for the opposition down the middle, and his ability to interchange with others would ensure plenty of fluidity remains in the attack.

It isn’t likely to happen, but Salah would offer something completely different to Firmino. Klopp has favoured the 4-3-3 formation both this season and last, with the balance of the midfield and forwards helping produce some superb team performances.

For the League Cup tie at Leicester, however, switching to a 4-4-2 diamond would help accommodate both Sturridge and Dominic Solanke.

This is a match that should see Klopp ring the changes, with Salah, Firmino and other key players given the night off.

Solanke has not had much of a chance yet this season and it would make sense to hand him his full debut in the League Cup.

Coutinho could also be included as he continues to work his way back to full match sharpness, and James Milner and Marko Grujic can come into the midfield.

Oxlade-Chamberlain could also play on the right-hand side of the diamond, giving him an opportunity to flourish more centrally.

Unlike last season, the options are certainly there for Klopp, and it will be interesting to see how he uses them, with three away games in eight days.