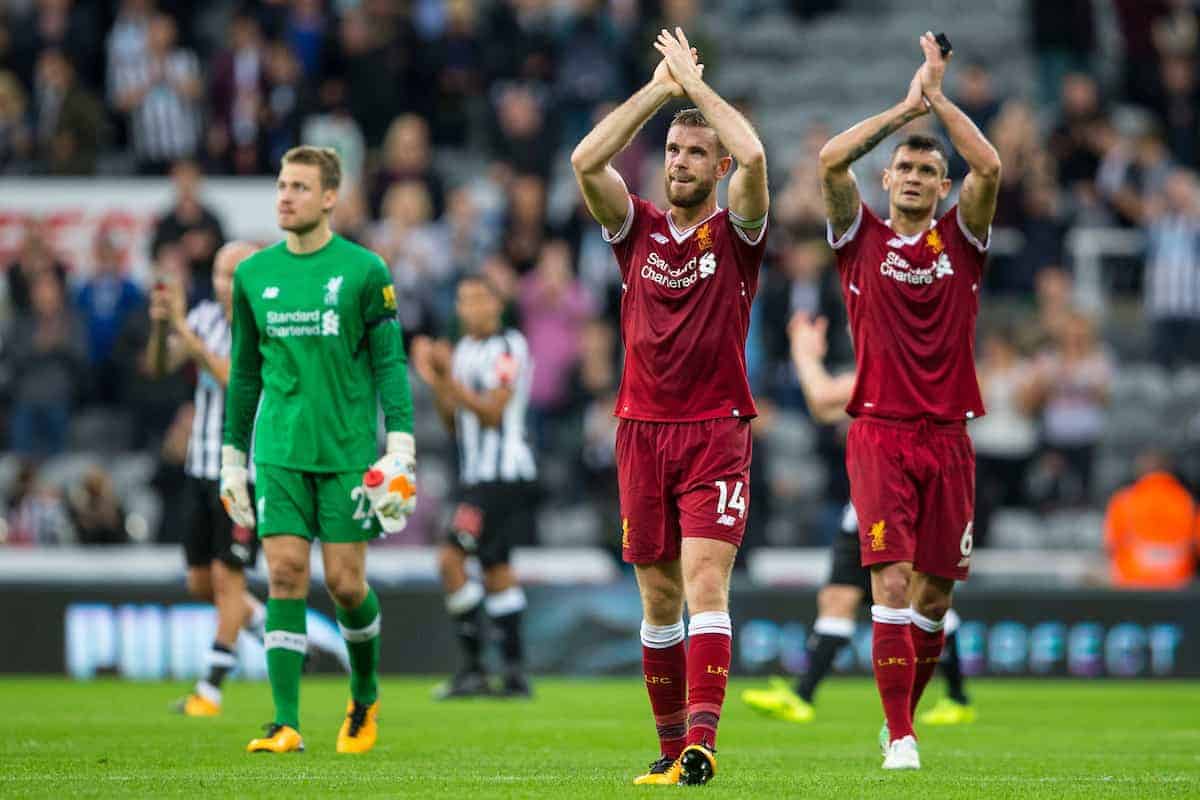 Liverpool were undone by their old manager Rafa Benitez, only picking up a point in a disappointing 1-1 draw with Newcastle United on Sunday.

Had a few easy saves early on, first from Jonjo Shelvey and a couple more to follow including a simple catch from a Matt Ritchie shot.

The ball deflected off Joel Matip and onto Joselu’s leg for the goal, but he does little to block it as it trickles into the net.

His poor kicking came to the fore towards the end of the game when he tried to pump the ball into the area but failed to reach it.

Put in the occasional good cross, and is quick up and down his flank. Given the high line Liverpool play and the way they conceded the goal he might be better used in the centre of defence.

Battled with Christian Atsu throughout, held his own at times but was lucky that a second-half mistake wasn’t punished.

Not his best game and also struggled to connect with passes, but did win his fair share of aerial duels. Had a chance with the rebound after Georginio Wijnaldum his the post, but saw his shot blocked.

Tracked back to challenge Joselu after Shelvey’s ball put him in behind the Liverpool defence, but his tackle rebounded off the Spanish striker’s leg.

Was running backwards as the ball was played in, not looking at his defensive partner or the striker. Even though he recovered, if he’s alert he plays Joselu offside easily.

Gave away a careless free-kick when the team were chasing the winner.

Passed one ball out of play and generally doesn’t evoke confidence on either side of the ball. Had one shot blocked.

As usual always a good option attacking down the left, and needed to put in a good performance after his recent interview ruffled a few feathers.

“All my critics, the people who were saying I should leave, should shut their mouths now I am back in the team,” he said.

He has been impressive so far this season, but like his team-mates on Sunday he was below par.

Passing was unadventurous and won’t have done anything to silence his critics, while on the other side Shelvey was splitting Liverpool’s defence with the pass for the equaliser.

Only completed 80 percent of his passes, which is a familiar failing for him in this deep midfield position where he should be up around 90 percent every game.

Still doesn’t do enough in games and at at times it appears that he doesn’t want to, which surely isn’t the case, but this is how it comes across.

Opened the scoring with a trademark shot from distance. Made some space for himself and took Shelvey out of the game, before finding the top corner giving Rob Elliot no chance.

Dropped deep to help control the play, playing some good passes out to Moreno. Some great touches throughout.

Had a couple more chances, but the performances of those around him won’t be doing anything to convince him to stay at Liverpool rather than leave for Barcelona.

Always a threat on the counter, and even though his touch and decision making can be hit-and-miss when he’s sprinting forward, he was a weapon nevertheless.

A poor touch stopped one particular counter, but he’d set Sadio Mane up for a good chance earlier.

Missed a chance after Elliot saved Daniel Sturridge‘s shot. Should score, and this won’t do anything to change the minds of those who say he struggles with his finishing.

Attempted an audacious chip early on, and while Roberto Firmino gets involved with a lot of defending, Sturridge looked like he was craving a goal.

Lost the ball in the buildup to the Newcastle goal, which allowed them to spring the counter.

Failed to take a good one-on-one chance as he saw his shot saved by Elliot, and looked hesitant up front which isn’t like him.

Threatened on the counter early on and had a chance to turn a Gomez cross in but the angle was too narrow.

Not at his blistering best and was taken off midway through the second half. Looks like he could be good, but needs a run of games to get some match sharpness. With the team out of the League Cup, he might not get them.

Doesn’t look like a player who can make an impact from the bench. Had one chance but couldn’t take it under pressure.

Made a few changes, and the big one was bringing Sturridge in up front and it didn’t work. Left Emre Can and James Milner on the bench while two midfielders were putting in poor displays.

Plays a high line without a sweeper keeper. Needs a midfielder and a centre-back, and profligacy in front of goal might also mean he needs a striker. Either that or give Solanke a run.

Might also need to change the system going forward. Will have plenty of time to mull it over during the international break.