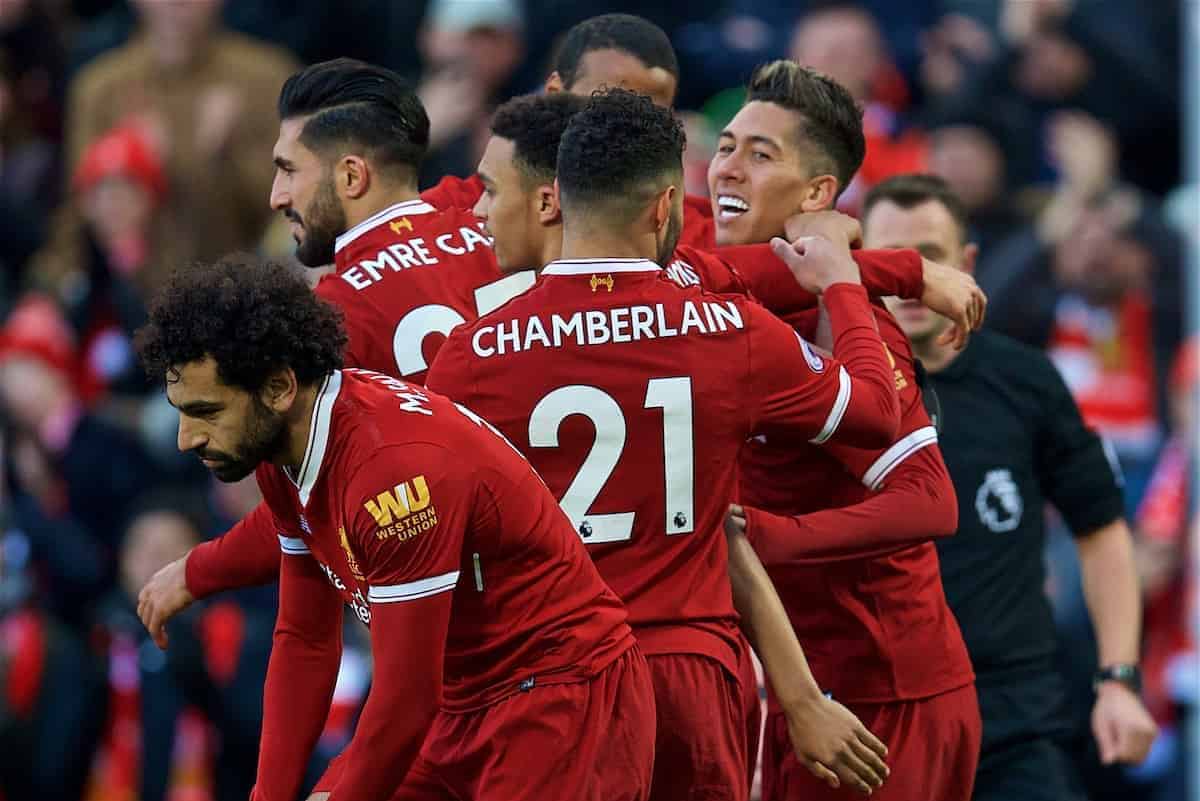 Liverpool romped to a comfortable 4-1 win over West Ham on Saturday, with the majestic front three once again stealing the headlines.

It was a relatively quiet afternoon for Karius, who was afforded the luxury of watching Liverpool dominate much of the game.

Two good saves denied Marko Arnautovic in the first-half, however, and he is cutting a more authoritative figure with each week that passes.

His much-improved run of form carries on.

Preferred to Joe Gomez at right-back, the teenager’s attacking thrust and quality on the ball made him a better option against a defence-minded West Ham side.

Alexander-Arnold made some great bursts down the right flank, delivering several appealing crosses, and there was such maturity to his play.

He really does look a special young talent.

Matip came back in for Dejan Lovren, but on current evidence, the latter is the better option.

The Cameroonian didn’t do a lot wrong, but he never exuded confidence, and a tame attempt at a tackle led to Arnautovic almost opening the scoring. Barring one lapse in concentration right at the beginning of proceedings, Liverpool’s record signing was a class act at the back.

His ability on the ball was there for all to see, while his aerial presence in attack saw one header land into Adrian‘s arms.

He will experience tougher days at the office, but he was largely faultless.

What a signing this lad is.

This was another performance full of energy, desire and quality from Robertson, with crisp passing and pace both on display.

Some of his crossing was also excellent, and he never stopped running. The Scot is now Liverpool’s undisputed first-choice left-back. Having missed the 5-0 win over Porto through suspension, Can sat deep in midfield at the expense of Jordan Henderson.

The German was never at his swashbuckling best, not that he needed to be in a more refined tole, but he contributed both defensively and going forward.

Can struck first at Anfield with a precise header, registering his sixth goal of a strong season – let’s hope it’s not his last on Merseyside.

After a Man of the Match showing in Portugal, Milner stood out once again.

The veteran found himself in the wars, going down after reckless tackles from Mark Noble and Pablo Zabaleta, but he didn’t let it affect him in a dynamic outing.

There was nothing too spectacular about Milner, barring one delightful Cruyff turn, but he did what he has made a career out of: being a reliable, intelligent presence.

Oxlade-Chamberlain hasn’t really kicked on after a great game against Man City last month, but he grew in stature as the match progressed on Saturday.

Deployed in a central attacking midfield berth, the Englishman was both neat and tidy when required, but also purposeful when space opened up.

He delivered the corner that Can scored from and found Salah for his goal – his fourth and fifth Premier League assists of the campaign.

The Reds’ man of the moment wasn’t at his unplayable best, but that’s not to say he wasn’t a constant menace.

His speed, both in legs and in thought, seemed on another level to any Hammers defender, and he hit the post in just the third minute.

Salah wasn’t to be denied his 31st goal of 2017/18, though, tucking a Tottenham-esque finish past Adrian.

After his Champions League hat-trick last week, Mane cut a more confident figure at Anfield, but he didn’t shine as bright as others.

He linked up well with Robertson down the left, often forming an effective passing triangle with Milner, and although three opportunities went begging, he got his goal to round off the scoring.

Another day, another superb Firmino performance.

So much of Liverpool’s good play came through him, and constant lever touches, unselfish movement and an admirable work ethic were all on show,

He slotted into an empty Kop net to put the hosts 3-0 up, completing a fantastic individual display. Had one decent effort, but didn’t have long enough to make an impression. This was a routine afternoon for Klopp, who got a top performance out of his team and nailed his team selection.

Using Alexander-Arnold over Gomez was spot on, and Milner’s industry and Oxlade-Chamberlain’s pace were both good additions.

Sometimes, it’s easy to take this world-class manager for granted.