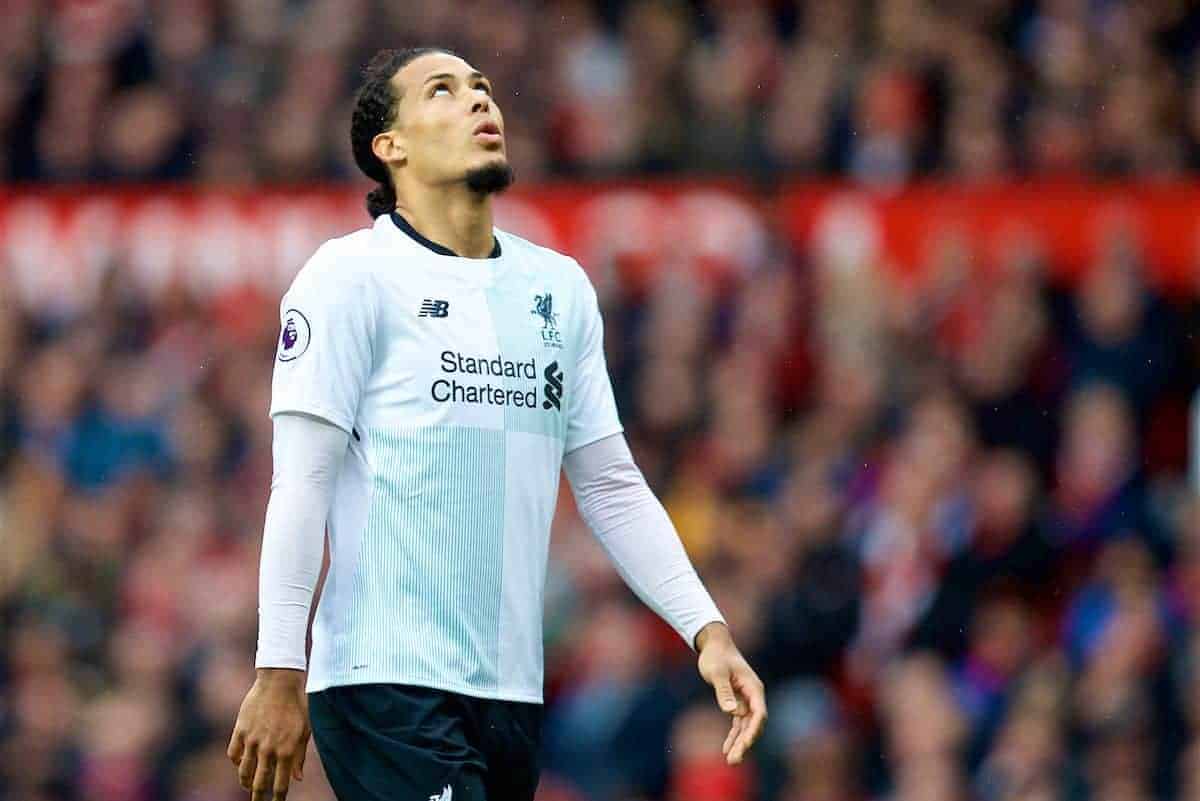 Liverpool failed to beat Man United at Old Trafford for the fourth consecutive season, made to pay for mistakes from the right side of defence in the first half.

Beaten by two well-taken goals by Marcus Rashford. The first curled beyond Karius with the German at full stretch – the second, smashed far post as he tried to cover his near upright.

Little to do bar pick the ball out of the net twice. Wanted to go and be the 11th player in the box for the added time corner, wasn’t allowed.

Probably a little harsh on the 19-year-old but his lack of concentration allowed Rashford to set Utd on the path to victory.

Liverpool were on top for the majority of the game and the defender tried to build the attack down the right but, his contribution will be remembered for his action on 14 minutes. Gave it the biggun’ in the week to the media about how he was relishing the chance to go toe-to-toe with Lukaku at Old Trafford.

Had his backside handed to him on a plate, twice, before the half-hour mark – the result? Two goals.

Very few would have opted to start Matip ahead of the Croatian but once again, when it came to crunch he was found wanting.

Decided to lose his head on 78 minutes with two ridiculous challenges in Fellaini out wide, causing Klopp to go apoplectic – he was on a three until this point, it won him a two.

Had a great chance to equalise from a corner just before Utd hit their second. Unfortunately his header took a deflection off his shoulder and the chance sailed wide.

Patrolled his side of the backline well and dealt with Lukaku perfectly when pitted against him. Should have been given the job full-time by the manager.

Positionally sound, probably a testament to him that Mourinho identified the opposite flank as the one to target.

Delivered a couple of superb cross box balls that had Ashley Young scrambling to block the path of Mo Salah. Sacrificed late on as Liverpool tried to find their second.

Looked lost at times, misplaced more than a few passes that won him the prize of a Klopp hairdryer.

Played one key pass whilst he was on the pitch and opted to shoot from distance to try and beat the best goalkeeper in the country. Not the best of days for the summer signing.

Almost made me smash my MacBook when he decided not to bother tracking Mata into the area, resulting in the Utd player trying his luck with what would have been a goal that was shown from now until the end time.

Recovered somewhat to try and hold a midfield together that was out of its depth on the day.

Worked hard on the left but ultimately it was for little. Covered a lot of ground but only won two of the four duels he found himself in.

Nothing to be too critical about but likewise little to be waxing lyrical on.

Mourinho knew who the main dangers were in this Liverpool side and he set his team up to nullify their threat.

Fed off scraps for pretty much the entire 96 minutes, the ball dropped to him with 30 seconds left inside the area and he volleyed the chance high and wide, think the ball landed in the Etihad.

Don’t think I’ve ever seen Mane give the ball away so many times in one match. No shots on target, none off target and one blocked.

His work down the left did end in the solitary Liverpool goal, disappointing on the whole though as he’s capable of so much more.

Tried his damnedest to pull something out of the game, frightened the Utd players for the whole fixture. If only everyone had his desire and drive. Brought on to be the creative spark to try and unpick the stubborn Utd midfield and backline, anonymous but still trying to find his feet after a long layoff.

Georginio Wijnaldum (on for Alexander-Arnold, 80′) – 5

Played six passes in the 16 minutes he was on, mostly camped on the edge of the Utd box but all for no avail.

Thrown on to literally be another attacker in the box, offers little – preseason he looked lively, not seen anything remotely close to that when the fixture is of a competitive nature. Wouldn’t be surprised if the decision to pitch Lovren against Lukaku will now give him nightmares. This was the pairing that tipped the balance of the fixture in favour of the home side.

No Henderson is a big sign that the ex-Sunderland player could be on his way out at the end of this season – the captain dropped for one of the biggest games of the season.

Bringing on Wijnaldum and Solanke to replace the two full backs was attacking moves, but a lack of attacking options from the bench was the major thing that hamstrung his moves.