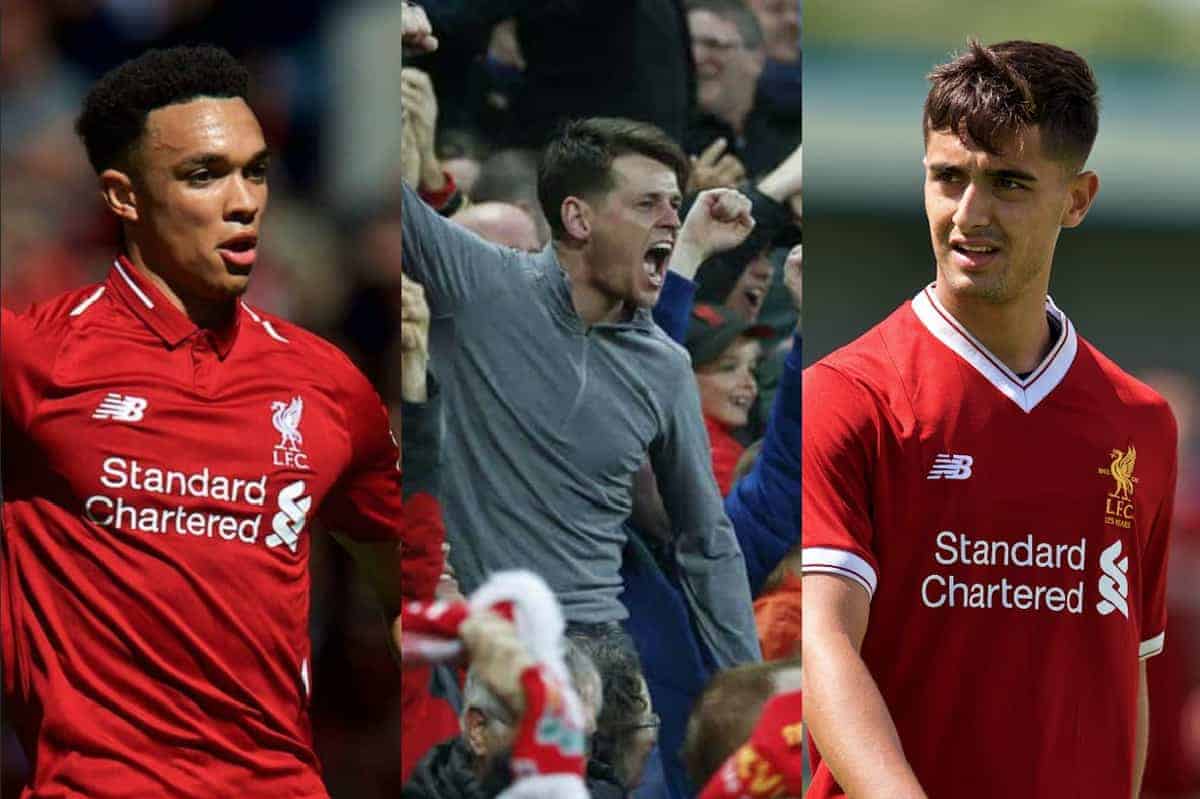 We round up the latest Liverpool news and rumours on Wednesday, as Trent Alexander-Arnold gives his take on a surprise England World Cup call-up. Alexander-Arnold was named along with Jordan Henderson in Gareth Southgate’s 23-man squad for England’s World Cup campaign on Wednesday afternoon.

Adam Lallana only made the standby list, while both Joe Gomez and Alex Oxlade-Chamberlain missed out due to long-term injuries, but the focus on the announcement was on Liverpool’s No. 66.

Alexander-Arnold has only made three appearances for the England U21s, and taking to Instagram after he was confirmed to be stepping up to the senior squad he relished a “dream come true.”

“Dreamt of going to a World Cup since I was a kid,” he said. “Today that dream come true, an honour to represent the 3 Lions this summer!”

The 19-year-old could even contest for a starting spot, with Kyle Walker expected to start as right centre-back and Kieran Trippier far from established as first-choice right-back. Liverpool’s push to the Champions League final this season has been remarkable, but those attending the showpiece clash with Real Madrid in Kiev have been marred by financial exploitation.

With airlines and hoteliers hiking up prices for those wishing to travel to the Ukraine for May 26, best-laid plans have been disrupted.

This has seen supporters’ group Spion Kop 1906 criticise the clubs’ decision not to extend the window for season ticket renewals for next season beyond the current date four days before the final:

We are disappointed that @LFC have chosen not to extend the Season Ticket Renewal deadline. The refusal to delay the deadline, at a time of huge unexpected expense for ordinary supporters, is unnecessary corporate greed.

That the Reds are challenging for a sixth European Cup in their first season back in the Champions League under Jurgen Klopp is remarkable, but the issues faced as a result are hugely disappointing. With many supporters unable to afford five-figure hotel rooms and surreal flight prices, some have taken extreme measures to ensure they arrive in Kiev by kickoff next Saturday.

One such example comes in the form of 30-year-old Nick Kelly, with Andy Mitten telling his story in the South China Morning Post:

“The Ukrainian capital is not easy to reach from England. For the intrepid Nick, he’ll take a train from Manchester to Sheffield, fly to Katowice in Poland, then back on a train to Lviv in Ukraine.

From there he’ll travel the last stage of the journey to Kiev, 2,700 kilometres from Liverpool—or a 32-hour drive without a break. There are Liverpool fans driving all the way to Kiev for the game on Saturday.

“Nick will return via Kharkov in Ukraine, Istanbul, London and then Manchester. The total trip price is just under £400 for flights and trains and will take four days, made possible by budget airlines, no visa restrictions and a great deal of self-confidence.

“Football supporting is about so much more than a game lasting 90 minutes.” Yan Dhanda’s impending switch from Liverpool to Swansea City has been met with criticism from supporters, with the 19-year-old forward joining a long list of departures from the academy.

The Reds did attempt to keep Dhanda on Merseyside, however, with Goal’s Neil Jones revealing details of his exit.

Dhanda is said to have turned down an offer from Liverpool, instead setting his sights on first-team football in south Wales.

“Liverpool will get training compensation and will ask for sell-on clause,” Jones explained.

It is difficult to argue with Dhanda’s decision, as while he had trained under Klopp at Melwood on a number of occasions, he was not even a marquee name in the U23s squad. With Dhanda absent, Neil Critchley fielded two trialists for the U23s’ 4-1 win over the Panjab FA at Kirkby on Monday afternoon.

Spanish winger Angel Sanchez scored the second goal for the young Reds, after goalkeeper Ross Sinclair had saved a penalty from Camen Bhandal, unfortunately conceding from the rebound.

Sinclair, a 17-year-old on trial from St Johnstone, is an interesting prospect, and one who Tommy Wright, manager of the Scottish side, believes is “the best ‘keeper of his age in this country”:

“The trial happened by chance. My friend Barry Hunter works at Liverpool and they are looking for a young ‘keeper. So I recommended they took a look at Ross.

“He has gone down for a few days training and played in the U23s game. So even if nothing happens it will have been a great experience for him.

“We have high hopes for Ross. He has work ahead of him but he will develop into a top-class goalkeeper.

“Without doubt he is the best ‘keeper of his age in this country.

“Ross is a good size, technically very good and he is comfortable with the ball at his feet.

“You could class him as having a man’s body but maybe a boy’s strength. He has only just turned 17 and he will develop physically.”

If Sinclair is signed he faces a big challenge supplanting the likes of Kamil Grabara, Caoimhin Kelleher and Viteslav Jaros from between the sticks at academy level.