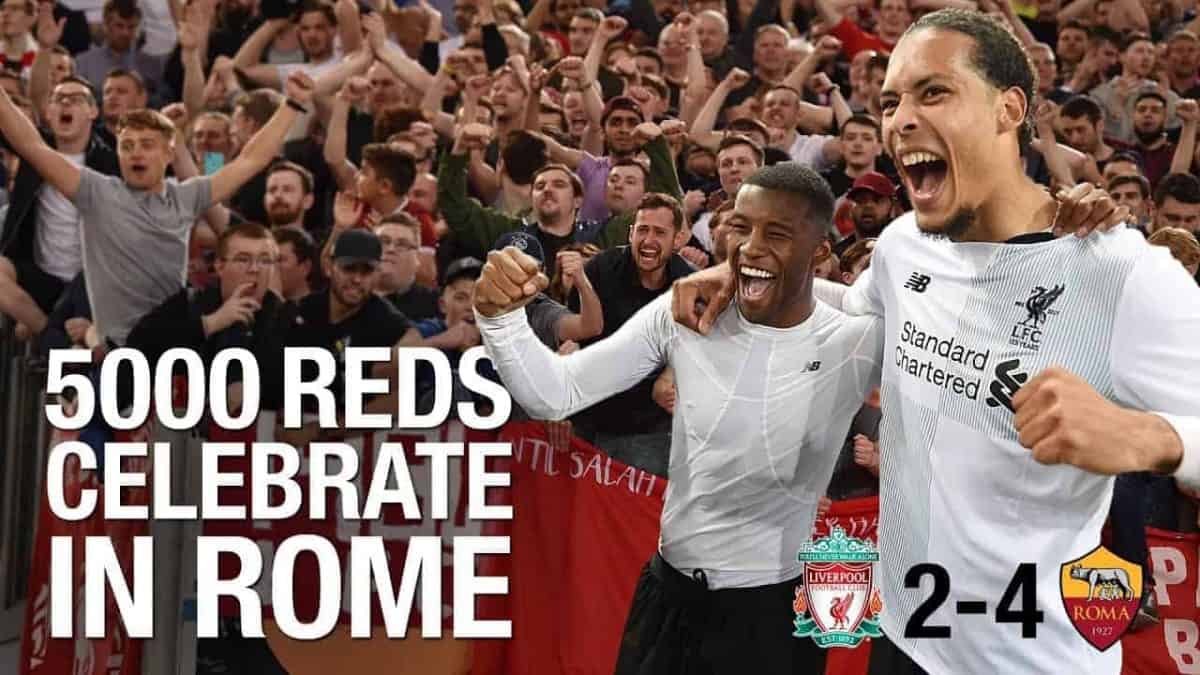 Liverpool’s supporters were in fantastic voice at Stadio Olimpico on Wednesday, as the Reds reached their eighth European Cup final.

It was yet another special European occasion for Liverpool, despite eventually losing 4-2 to a spirited Roma side on the night.

Jurgen Klopp‘s team progressed 7-6 on aggregate over the two legs, with goals from Sadio Mane and Gini Wijnaldum proving so crucial in Rome.

If the performance wasn’t the Reds’ greatest of the season, the scenes that followed after the final whistle were something to behold.

The above video, provided by Liverpool’s official YouTube channel, perfectly captures the passion on show both on and off the pitch, as Jordan Henderson and his teammates celebrate with the adoring 5,000-strong faithful.

The footage starts with Henderson and Mohamed Salah embracing, before the skipper pumps his fist towards the away end.

The joy on the faces of the Liverpool fans genuinely warms the cockles of the heart, with some almost close to tears. The players are then shown huddling together as they hold up a banner showing support for supporter Sean Cox, who remains in a critical condition after being attacked by Roma fans before last Tuesday’s first leg at Anfield.

Dejan Lovren, gaining a reputation as an influential member of the dressing room after some interesting post-match social media antics, looks especially delighted.

Trent Alexander-Arnold and Ben Woodburn must be pinching themselves, with the teenage pair cutting delighted figures, along with fellow youngster Curtis Jones.

Dutch duo Virgil van Dijk and Wijnaldum pose in front of photographers as they drink in every second of proceedings, and Mane returns after a shower to gee-up and high-five some of the fans still kept inside the ground.

Another overjoyed supporter gives a decent rendition of one of Mohamed Salah‘s most famous songs, sung to the tune of ‘Sit Down’ by James, on a truly unforgettable evening in Italy.