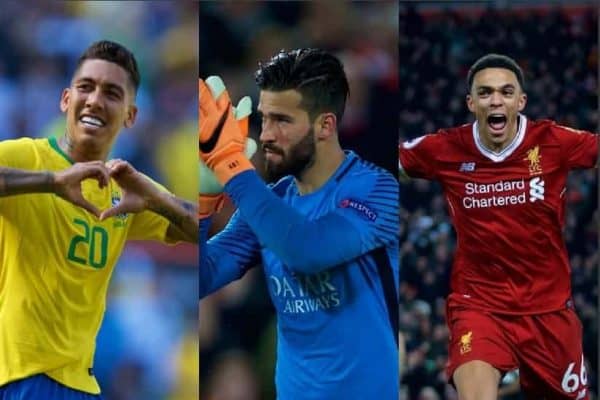 We round up the latest Liverpool FC news and transfer rumours on Friday, with Roberto Firmino and Marko Grujic in World Cup action.

Liverpool’s hopes of signing Alisson from Roma this summer have been dashed in recent times, with talk of a move to Anfield cooling significantly.

Brazil’s No.1 has his sights set on Real Madrid, according to many reports, while Inside Futbol cite a report in Italy saying the transfer is edging closer:

“Talks with Roma have been more difficult and Real Madrid have been unwilling to match their asking price, but according to Italian daily Corriere dello Sport, one of Alisson’s agents has arrived in the European capital to push the deal forward.

“The goalkeeper’s entourage have made it clear to Roma that he wants to join Real Madrid and are keen see them get a deal over the line with the European champions as soon as possible.

“Real Madrid are expected to put in a new offer worth €60m, which could rise to around €70m based on his performances at the Bernabeu.”

The thought of Alisson being in a Liverpool shirt was an exciting one, but it looks as though Santiago Bernabeu will be his next destination.

Here’s to the next wave of goalkeepers being linked…

Ah, no sooner had we mentioned those goalkeeping links that another cropped up on Friday.

Lazio stopper Thomas Strakosha has been tipped to join Liverpool in recent weeks, and there may have been another step forward in developments.

According to Calciomercato, Lazio are “open to sell the Albania International” this summer, with a €30million fee expected to be enough to prise him away from Stadio Olimpico.

Strakosha made 52 appearances for the Serie A club last season and at 23 years of age would represent a long-term investment.

The reports seems a little on the flaky side, however, and there is still a feeling that Jurgen Klopp will stick with Loris Karius if he can’t sign first-choice targets such as Alisson and possibly Atletico Madrid’s Jan Oblak.

Firmino is still somehow being kept out of Brazil’s starting lineup by Gabriel Jesus, despite a limp showing by the Man City man against Switzerland.

Liverpool’s pressing machine again started on the bench against Costa Rica on Friday afternoon but was introduced midway through the second-half.

Brazil were struggling to break down their opponents’ stubborn rearguard but Firmino brought so much to the team when he came on and was heavily involved for Philippe Coutinho‘s stoppage time opener, heading the ball across goal.

He almost scored himself, too, following a lovely one-two with Neymar, before the PSG superstar put the icing on the cake moments later.

Surely Firmino starts the next game against Serbia.

Nobody quite knows what’s going on with Zeljko Buvac.

Klopp’s assistant is still on a leave of absence that started back in April and is unlikely to return to Liverpool as things stand.

The 56-year-old was tipped to become Fenerbahce’s head coach, but that ship has sailed after the Turkish club confirmed former Netherlands midfielder Phillip Cocu as their new boss.

It could be an interesting summer with regards to Buvac’s future, with matters surrounding his (current temporary) Anfield exit still a little cloudy, to say the least.

Trent Alexander-Arnold is all the rage at the moment, with the youngster deservedly receiving positive press left, right and centre.

The latest to heap praise on him is Alex Inglethorpe, with the Academy director revealing his pride at Liverpool’s young prodigy’s progress:

“Everyone at the Academy is immensely proud of not only what Trent has achieved so far, but the way he’s done it and the humility he’s managed to keep on the journey he’s been on,” Inglethorpe told the Liverpool Echo.

“He’s passionate about the city, he’s a proper Scouser, he’s not forgotten his roots.”