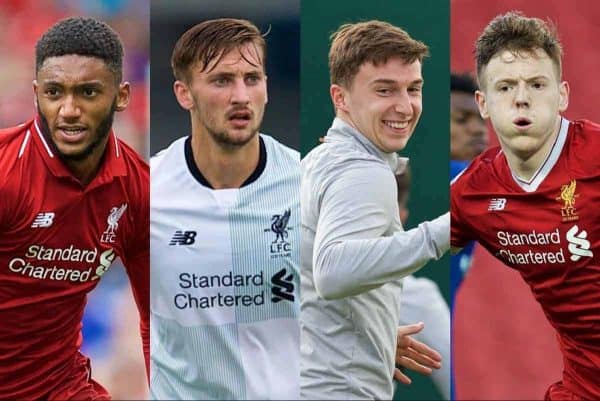 Ragnar Klavan‘s late move to Cagliari raised question marks over Liverpool’s depth at the back, but it provides a host of youngsters an opportunity.

The Estonian marked the end of a two-year spell with the club when he completed his £2 million switch to Serie A on Friday.

Despite only arriving as a backup centre-back, Klavan’s understated approach quickly earned him cult status among supporters, who have wished him a fond farewell.

There had, however, been concerns that allowing the 32-year-old to depart would leave the Reds short at the back, particularly given Dejan Lovren and Joel Matip‘s struggles with injury.

But Jurgen Klopp is said to have sanctioned the deal due to his faith in Liverpool’s youth, and this should therefore be seen as a positive as he prepares to give further opportunities.

Here, we take a look at the four young centre-backs most likely to benefit from Klavan’s exit.

Klavan’s move was largely prompted by a change in senior fortunes at both right-back and centre-back, with both Gomez and Nathaniel Clyne returning to fitness.

Clyne can now take up his role as Trent Alexander-Arnold‘s alternative, while Gomez will move into the heart of defence to compete with Lovren and Matip.

At 21, and enjoying a burgeoning partnership with Virgil van Dijk, Gomez could feasibly become first choice on a long-term basis if he impresses in the coming weeks.

Tall, strong, quick and composed in possession, though it will take time for the Catford native to hone his game after largely operating at full-back prior to this season, he is perfectly suited to the role.

And while he is naturally right-sided, Gomez’s stint at left-back under Brendan Rodgers in 2015 highlights his ability to deputise for Van Dijk when required—ostensibly taking over from Klavan.

Among those called up to Klopp’s squad for first-team training during an injury crisis in the second half of last season, Phillips’ rise came as something of a surprise.

Having spent much of 2017/18 on the sidelines with a back injury, the former Bolton Wanderers defender saw his position threatened by his younger counterparts.

But remaining in the senior setup for pre-season, the 21-year-old produced an impressive run of form, serving as a hugely dependable option for Klopp, and one of only six players to feature in every friendly.

Phillips is a centre-back who performs the basics well, and his intelligence and humility on and off the pitch will no doubt have endeared him to the manager.

He operated on both the left and right of the centre-back pairing during pre-season and showed little sign of inexperience—so Klopp will have no concerns over throwing him in when needed.

Phillips’ opportunity was arguably due to injury to Masterson, who was ruled out of last season’s run-in with a knee problem after being named on the substitutes’ bench twice in April.

The Irishman, who joined from Lucan United in 2014, spent the summer in recovery, but returned to the U23s fold late on in pre-season and has now committed his long-term future to the club.

Masterson is the most well-rounded centre-back in Liverpool’s academy ranks, and at just 19 he can develop into a leading figure in the years to come, starting with the U23s this season.

His lack of experience could have seen him move behind Phillips in the pecking order, but Masterson can expect to be given further opportunities by Klopp due to his potential.

Ironing out the kinks as Neil Critchley‘s defensive leader will give him a strong platform to build for when he is called upon at first-team level.

Liverpool’s closing friendly of pre-season, the 3-1 win over Torino at Anfield, provided plenty of feel-good moments—not least Johnston’s late cameo, in front of his father and grandfather.

Though he was only given a few minutes on his first senior outing, Johnston will have been buoyed by his role, and at 19 has displayed great confidence when discussing his involvement.

“Whether it was playing against Torino in front of 40,000 fans at Anfield or whether I’m playing [for the U23s] and it’s 3,000 people, it is exactly the same,” he told LiverpoolFC.com.

This should be no surprise, as Johnston’s no-nonsense approach exudes conviction: he is an old-fashioned centre-back whose strength on the ground, aerial prowess and last-ditch challenges caught the eye last season.

Johnston outperformed Phillips and Masterson as the U23s’ best defender, and as a left-sider already comfortable in a ball-playing system he could be seen as an ideal replacement for Klavan down the line.