Liverpool have made it five wins in a row to start their Premier League campaign, with the 2-1 victory over Tottenham seeing various individuals thrive.

The Reds headed to Wembley Stadium on Saturday knowing a big performance was required to get the better of an excellent Spurs outfit.

Barring some sloppiness in the final third, it was an excellent display by the Reds, who were always in control against their top-four rivals.

Gini Wijnaldum‘s first-ever away goal in the Premier League opened the scoring, before Roberto Firmino‘s tap-in doubled the lead.

Erik Lamela’s last-gasp effort gave the scoreline a rather unfair look, but three points were all that mattered for Jurgen Klopp‘s men. 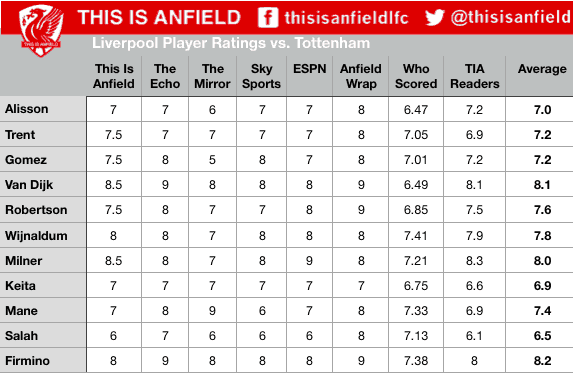 Virgil van Dijk and Joe Gomez shone at centre-back, with the duo looking like one of Liverpool’s most commanding centre-back partnerships in years.

This is Anfield’s Henry Jackson believed Gomez was largely “immaculate”, despite a lapse early in the second-half, while his senior partner again made a “huge, huge difference”, according to the Echo‘s Ian Doyle.

James Milner was colossal in the middle of the park, with many viewing the veteran as the standout performer on the day.

At 32, he shows no sign of slowing down – if anything, he is getting better – and The Anfield Wrap’s Ben Johnson praised his experience and nous, saying, “had a load of lovely chats with the ref and managed us through the game”.

Firmino led the line in his own inimitable manner, while Mohamed Salah and Sadio Mane failed to hit top gear, and the Brazilian was another singled out for special praise.

Doyle felt he “proved a real pain for Tottenham all over the pitch”, while ESPN FC‘s Dave Usher lauded a “terrific, unselfish performance from the man who makes Liverpool tick.”

Next up for the Reds is the visit of Paris Saint-Germain in Tuesday’s Champions League curtain-raiser, which should be a fascinating evening.