Jurgen Klopp has made three changes for this evening’s important Premier League clash at Arsenal, as the Reds aim for another vital three points.

Saturday brings one of the most entertaining clashes in the league calendar, as Jurgen Klopp‘s Reds take on the Gunners at the Emirates.

Arsenal are under new management in Unai Emery, who masterminded Sevilla’s defeat of Liverpool in the Europa League final in 2016, and with both sides vying for top honours this season it promises to be a tight contest.

Alisson starts in goal for the away side, behind a back four of Trent Alexander-Arnold, Joe Gomez, Virgil van Dijk and Andy Robertson.

The continued absence of Naby Keita and Jordan Henderson ensures Fabinho keeps his place in midfield, joined by Gini Wijnaldum and James Milner.

And as their return to form continues, Mohamed Salah, Sadio Mane and Roberto Firmino are retained in attack.

Speaking ahead of the game, Klopp insisted “this is still the start” despite Liverpool’s excellent results early on.

“We stuck to our plan, we still try to. As long as the majority of the boys are fit then we have a really good football team,” he said.

“And having that and playing for a massive club like Liverpool means you go into each game with a big chance and a big wish to win it.”

There are few other absences to navigate, allowing Klopp to field the likes of Xherdan Shaqiri, Daniel Sturridge and Divock Origi on his substitutes’ bench.

Dejan Lovren misses out with a muscle injury—the latest in a long line for the Croatian. 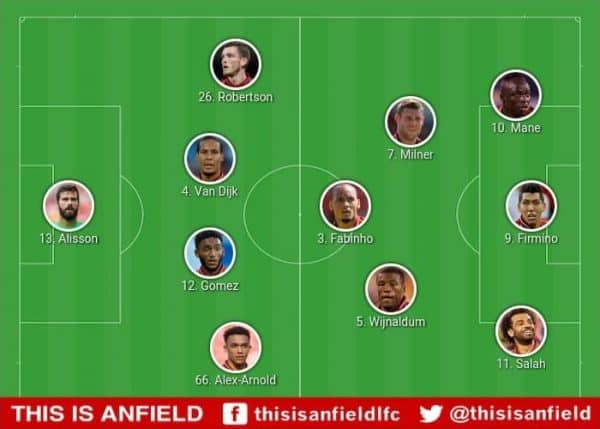