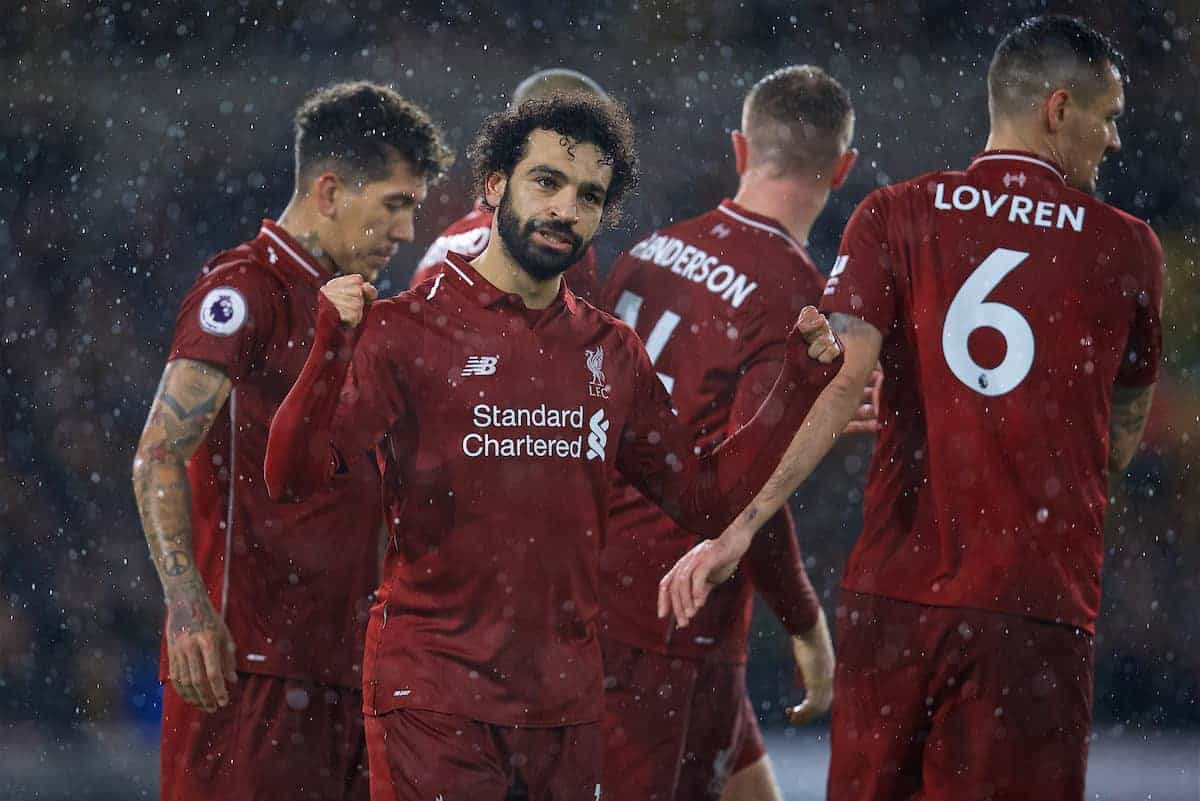 A professional Liverpool performance secured all three points in a 2-0 win over Wolves, and fans were delighted as the Reds remain top over Christmas.

The Reds travelled to Wolverhampton with the chance to secure top position for Christmas Day and establish a four-point buffer over Man City, and they did so with a well-disciplined performance which only exemplified their ever-growing maturity.

A rain-soaked Molineux had welcomed the two sides and paved the way for an end-to-end first half which Liverpool narrowly edged thanks to an early show of precision finishing from Mohamed Salah—his fifth goal in four games.

Liverpool were kept honest by Wolves throughout, but a poacher’s finish from Virgil van Dijk put the result beyond doubt midway through the second half and extended the Reds’ unbeaten streak to 18 games.

The three points, and an 11th clean sheet of the season, keep Jurgen Klopp‘s men at the top of the Premier League table, and here’s how supporters reacted to the result on social media and our forums.

Virgil! Knows where the goal is at both ends!

No other CB has come into a new team and completely changed the whole way of defending. No other CB has had such a big impact in the defensive record like @VirgilvDijk has for @LFC. Everybody has improved! That shows you have good he is!

What a run and what a finish – that's the Dutchman's first Premier League goal for two years. For a centre back he's put a few strikers to shame with that movement and finish.! #WOLLIV

HE'S A LARGE MAN WHO IS GOOD AT THE FOOTBALL

Whether Liverpool win the league or not, Virgil Van Dijk could easily win PFA Player of the Year. Man-of-the-Match for what must be the 10th time this season.

Virgil Van Dijk really has made a remarkable difference to this Liverpool side.

There is no better defender on world football, on current form anyhow, than Virgil Van Dijk. An absolute gem of a player. If he was a car he'd be a Rolls Royce running on low emissions. Sublime.

Favourite moment from that game: Traore putting on the afterburners only to see Van Dijk effortlessly run past him.

Salah was the key cog in the machine for the Reds…

“Thought Mo was excellent today, always full of running and trying to create something.”

Just watching the Salah goal back in slow-motion, and what a superb finish it was. ?

“Salah has been ace tonight.”

Salah was absolutely amazing tonight. Not bad for a one season wonder.

With a slalom-game like that, Mo #Salah could get Egypt their first gold in the Winter Olympics if he puts his mind to it.#WOLLIV #LFC

Another clean sheet for Liverpool against a decent Wolves – that’s now 11 cleans in 18 games. Salah involved in another 2 goals ?? #LFC remain unbeaten and top the table on Christmas Day for 2018. The real deal ?? #WOLLIV #LFC

Professional performance from Liverpool here and I don’t think we’ve expended that much energy.

A few errors, but another clean sheet and all important three points.

After 18 games, Liverpool have scored 39 times and conceded.. SEVEN times. Fuck me, we're good us like..

And Liverpool have gifted fans an early Christmas present…

Absolutely brilliant. This team is special.

Excellent. Really, really good, even if it wasn't in the first half.

Still didn't concede, still had another gear to go through, still won and top for Christmas.

“Clean sheet and 3 points in very difficult conditions and at a place where City dropped points; so very immense this. Mistakes were expected and we came out on top nonetheless.

“VVD, Salah and Fabinho immense. Could have scored more, could have conceded more, but deserved to win nonetheless!

“Merry Christmas! It looks wonderful from here at the top!”

Top of the league at Christmas in #LFC best start in the league in our entire history, 126 seasons! Undefeated in 18 league games, with the best defence in the league – conceding just 7 goals and 11 clean sheets! Mo Salah, top scorer in Premier League! Merry Christmas Reds. ??

“Four points clear. Top at Christmas. Three points against a team who’ve been a pain in the area to the top sides.

A performance of real quality. The pressure was on against a good side, away from home. The way the players now manage games is incredible. Merry Christmas Reds!

Definition of a professional performance. Made up for dots of mistakes by showing what they’re made of. It’s said enough, but Van Dijk is untouchable. Midfield three deserve big credit today. Top of the tree at Xmas. #LFCdigest

This team just seems like a machine at the moment.

Top of the league ?