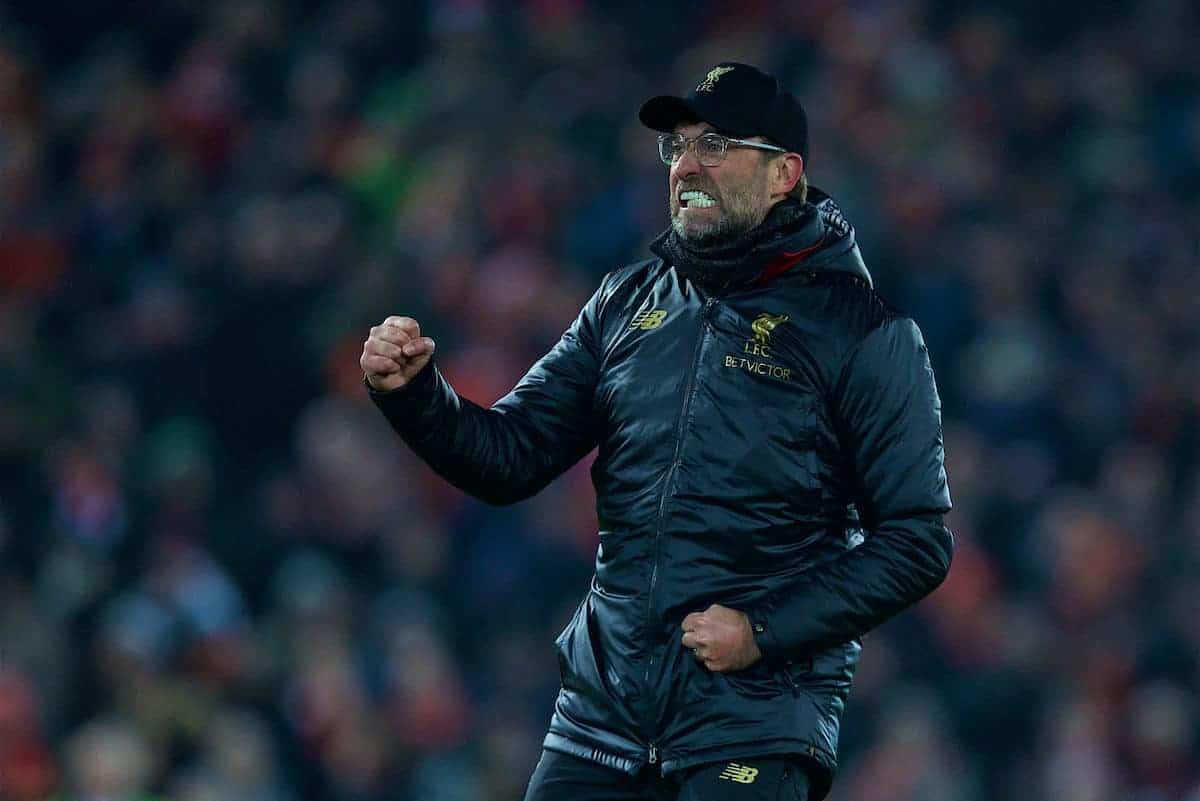 A chaotic 90 minutes saw seven goals hit the back of the net as Liverpool secured a dramatic Premier League victory over Palace.

A frustrating and unimaginative first half saw the Reds punished on the counter by Andros Townsend, ensuring a turnaround job was required in the second period.

Liverpool didn’t have to wait long, however, for their fortunes to turn around as Mohamed Salah levelled the scores by spectacularly latching onto Virgil van Dijk’s deflected shot moments after play resumed.

What followed was nothing short of chaos, whereby the Reds took the lead through Roberto Firmino before the Eagles again asked more questions of Liverpool’s ability to find a match-winning goal.

The answer then came in the form of Salah notching his 50th Premier League goal and Sadio Mane finding the back of the net late on.

The result means a seven-point lead atop of the table was still secured, at least temporarily, and here’s how supporters reacted to the result on social media and our forums.

Liverpool’s first half was lacklustre at best, but fans were optimistic…

A very pedestrian first half from Liverpool. No thrust or spark and too many passengers.

Keita, Mané and Firmino have all gone missing.#LIVCRY #LFC

Poo first half. Feel we totally lost our heads pressing and thus shape for the goal. Silly. Also Naby has been poor

I've enjoyed Milner, Fabinho and Hendo's performances today. We are just lacking that killer final ball. Might need Shaq sooner rather than later. Or 2 Pens. ?

Watch when we come out second half, making darting little runs all over the place

This, as they say, is a test of character.

Keita struggled to have an influence as questions were raised…

Wasted chances for Liverpool then punished by a quick Palace counter. Not sure why Klopp is insistent on playing a central midfielder as an attacking left sided option – not really the best use of Keita especially when Shaqiri is available. #LIVCRY

Also, Keita not really shining here. If one player were to go off, I'm guessing it would be him.

Jurgen Klopp said pre-match Naby Keita had trained brilliantly this week. Unfortunately he's not been able to transfer it into a match situation. Well off the pace so far.

“Keita isn’t a left winger, but he’s supposed to be a top class footballer and he has to provide more.”

All this dicking about with Keita on the left side of midfield isn’t doing the player or the team any good.

Keita not at the races at all, but he’s definitely not been helped by playing out of position.

On Keita, I actually thought he could play well in a more advanced position. The issue against a compact team is he receives the ball with no time to drive into space and commit players. That’s why he’s struggling, but his time will come. Supporters need patience though.

Henderson was a standout performer in the middle of the park, as was Fabinho…

In and among the madness, Henderson had another excellent game today. His work off the ball in particular was immense.

I think I've just about got my breath back. This team are something else. An absolute joy.

“Hendo is playing the game of his life! Top display thus far.”

“Positives Henderson and Fabinho are a great pairing in midfield…”

Captain’s performance from Jordan Henderson today. He was brilliant whilst most of the others were pretty ordinary

Fabinho has established himself as a 100% starter. His interceptions, reading of the game and that ball to Milner for the 3rd goal was sublime. One of the main reasons we won the game.

While it was chaotic at best, the result encapsulated the ever-growing maturity the Liverpool squad possesses in the face of adversity…

Wild game that. Great win, massive three points. Lots of things to pick holes in but the main thing for me is these lads always dig deep and find a way.

An absolutely massive win for #LFC. Anfield was a nervous wreck for most of the second half and so were the players, largely because Crystal Palace were brilliant. Klopp won't want to see a repeat of that defensive performance but seven points clear all that matters for now.

“Thats the sign of champions.. Don’t play great but grind out a win against a tough team.. Ask city…Well done reds..We go again.”

We were certainly made to work for those 3 points, but what a massive win. A game which, while not pretty, shows Liverpool’s ever growing confidence and mental fortitude.

To win a title you need a bit of everything to get over the line, today was a great example that the Reds are equipped to go all the way, behind then ahead, pegged back then got the 3 points to keep 7 clear. Fantastic character showed by a team looking hungry to win this thing.

Huge for #LFC that. Not only the points but another test of mental strength going behind, being pulled back to 2-2, getting a man sent off and against a well organised and attacking #CPFC.

If, and it's a huge if… but if Liverpool go on and win the title – Look back on this game: Milner knowing he's gone, Bobby Firmino at full-back, 18-year-old Rafa Camacho playing some form of late sweeper role. Madness. Beautiful madness. #LFC