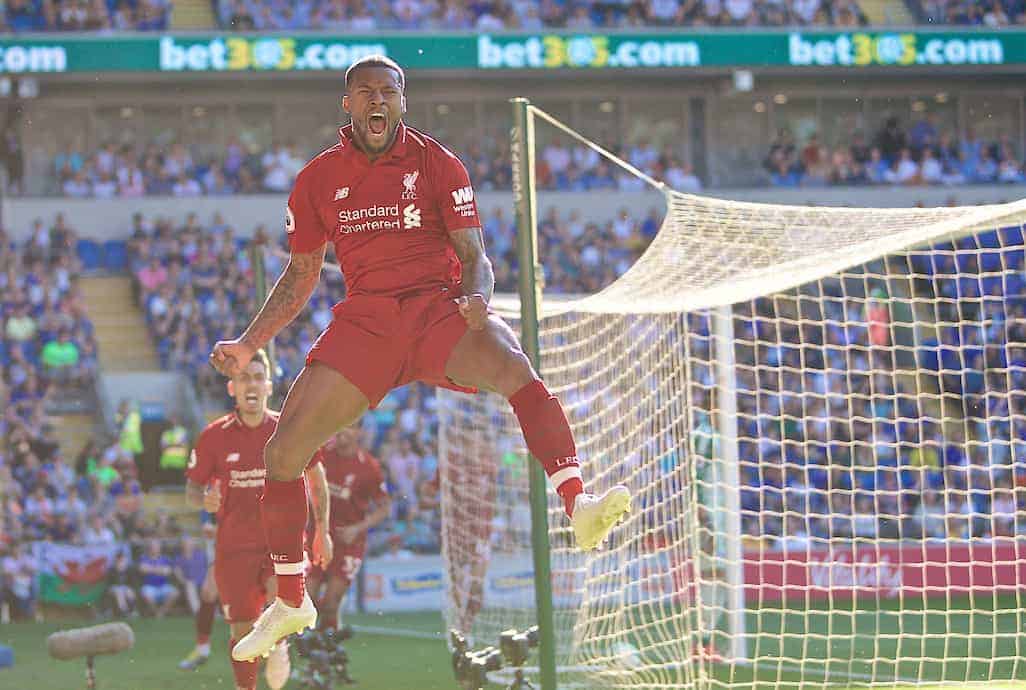 Liverpool returned to the top of the Premier League after a 2-0 win at Cardiff thanks to second-half goals from Gini Wijnaldum and James Milner.

Once again, Liverpool headed into a Premier League match knowing a win would take them back to the top of the table…but anything less could spell disaster for their title challenge.

Man City beat Spurs on Saturday to go a point clear again, with both teams continuing to show relentless winning ability and intent.

Jurgen Klopp opted to rotate his midfield once again, this time bringing Jordan Henderson and Naby Keita in and leaving out Fabinho with James Milner, keeping the legs fresh and the competition for places high.

The Easter Sunday sunshine in Wales made for a great day but a dry pitch, meaning patience would be needed to break down a determined Cardiff team out to avoid relegation and cause an upset at the top. 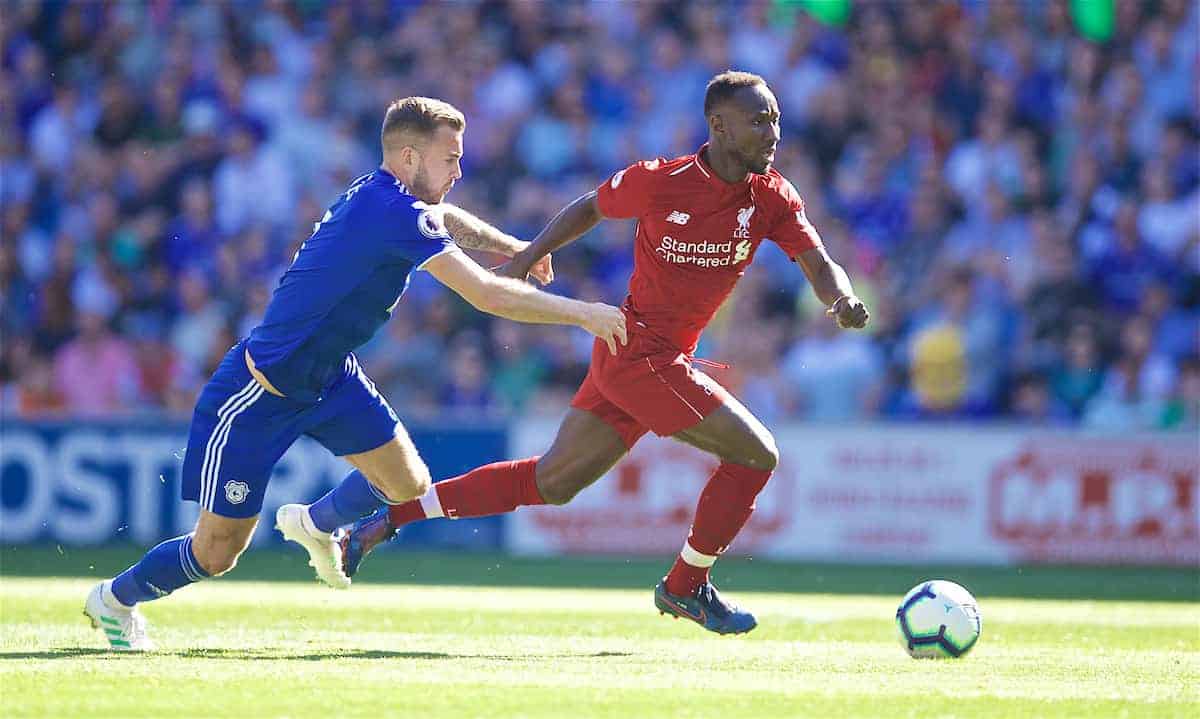 After recent improved form as a No. 8, it was immediately clear that Jordan Henderson was continuing in his more advanced role, with Gini Wijnaldum deployed in the No. 6 position instead of Fabinho.

The Reds struggled to gain any momentum early on though, with the home fans cheering every minor block, interception and pass their own team made, clearly intent on making it a difficult afternoon for Liverpool.

Even so, the travelling Kop was in great voice and slowly Klopp’s team got a grip of the possession.

After an early cross from the Cardiff left to the far post saw Andy Robertson called into action with a strong block, the first big chance of the game fell to Roberto Firmino—and he should have buried it.

Mohamed Salah and Sadio Mane combined neatly outside the area to free the Brazilian, but one-on-one with the keeper, he skied his effort over the bar.

Mane’s movement was causing problems and he put one shot over from a cross, before Salah produced a brilliant turn to go through—but his shot was saved by Neil Etheridge.

Cardiff’s sporadic threat came down the wings with pace and the last chance of the half came via one such run; a corner was won down the right and it ended with Oumar Niasse steering a volley at goal, tipped over by Alisson. 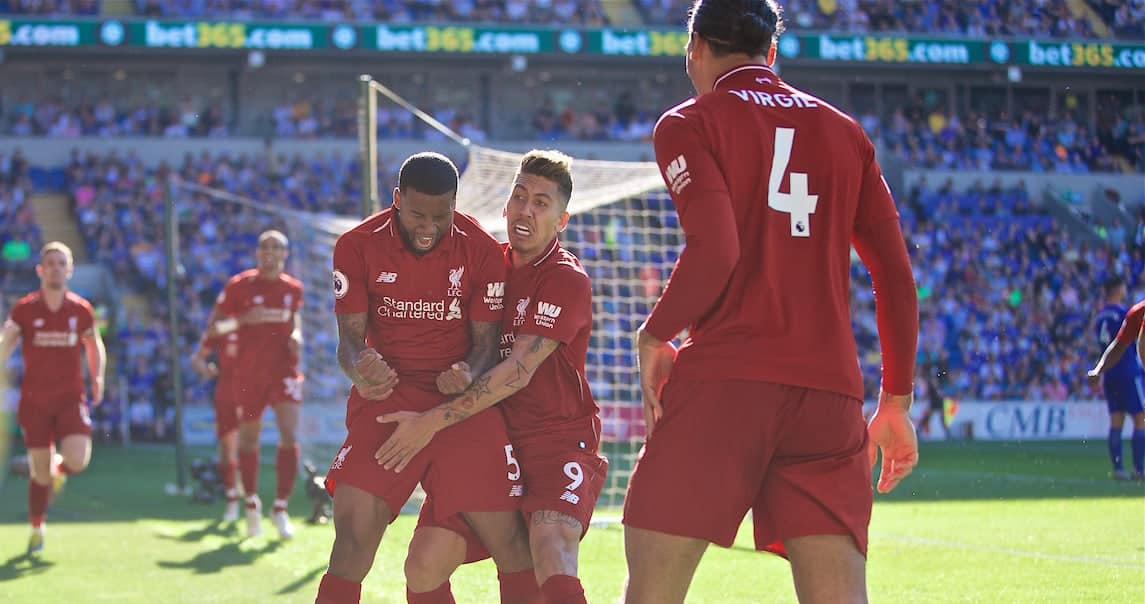 After the break, Liverpool were quickly in the ascendency and pushing forward in much more frequent fashion—and the opening goal arrived just 10 minutes into the second half.

A Trent Alexander-Arnold corner was hit low and almost scuffed, but it was met with ferocity, venom and deadly accuracy by the thunderous right boot of Gini Wijnaldum.

The No. 5 almost took the net off with his strike and the celebrations from the fans and players made the relief felt clear.

Henderson should have made it two just a few minutes later, but blazed wildly over the bar from 12 yards after some good work from Naby Keita.

Liverpool then got a big let-off at the other end, as Alisson missed his punch on a corner and Sean Morrison somehow headed wide from three yards.

Klopp brought on Fabinho to shore up midfield, but his afternoon lasted just a couple of minutes as he went off injured after a clash off heads—clearly against his will, but with the medical staff taking no risks.

It was a little nervy heading into the last quarter of an hour despite Cardiff’s extremely intermittent threat, but Salah won a penalty after being repeatedly pulled and tugged in the box—and James Milner made no mistake from the spot.

Top of the league again and all eyes now turn to midweek and the Manchester derby, City’s game in hand. 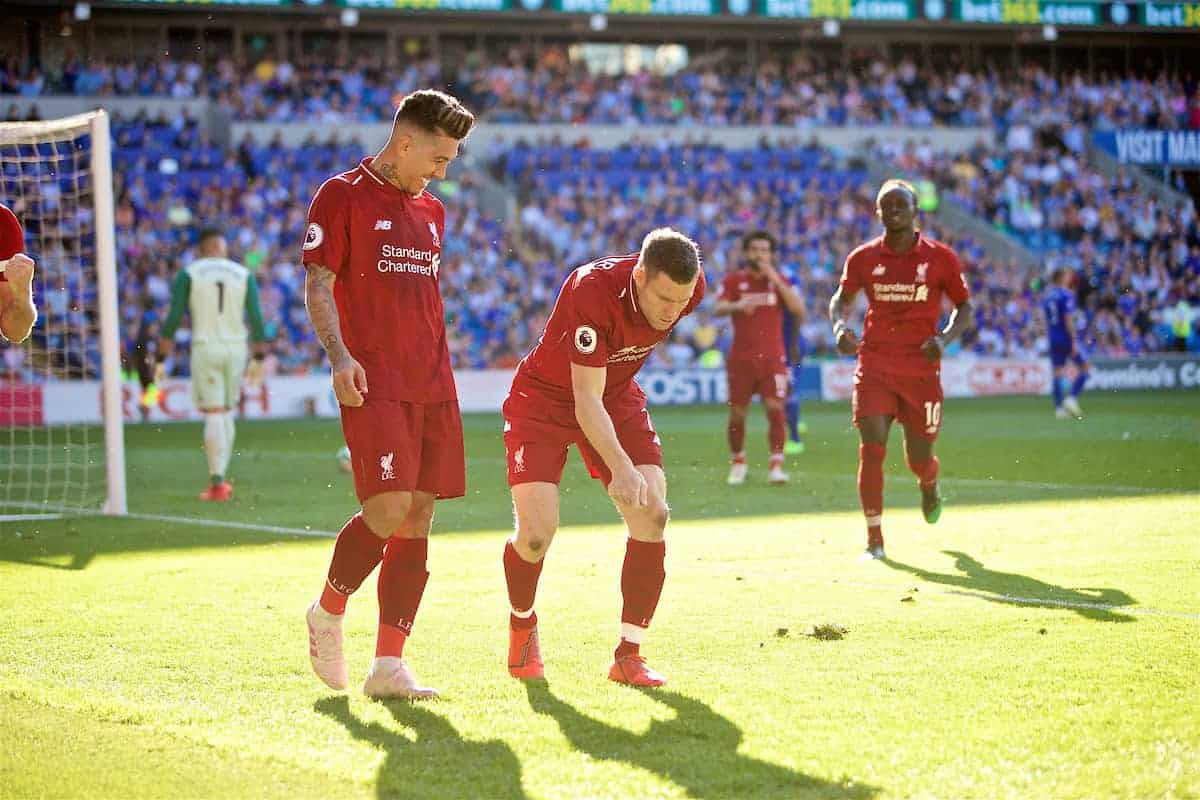