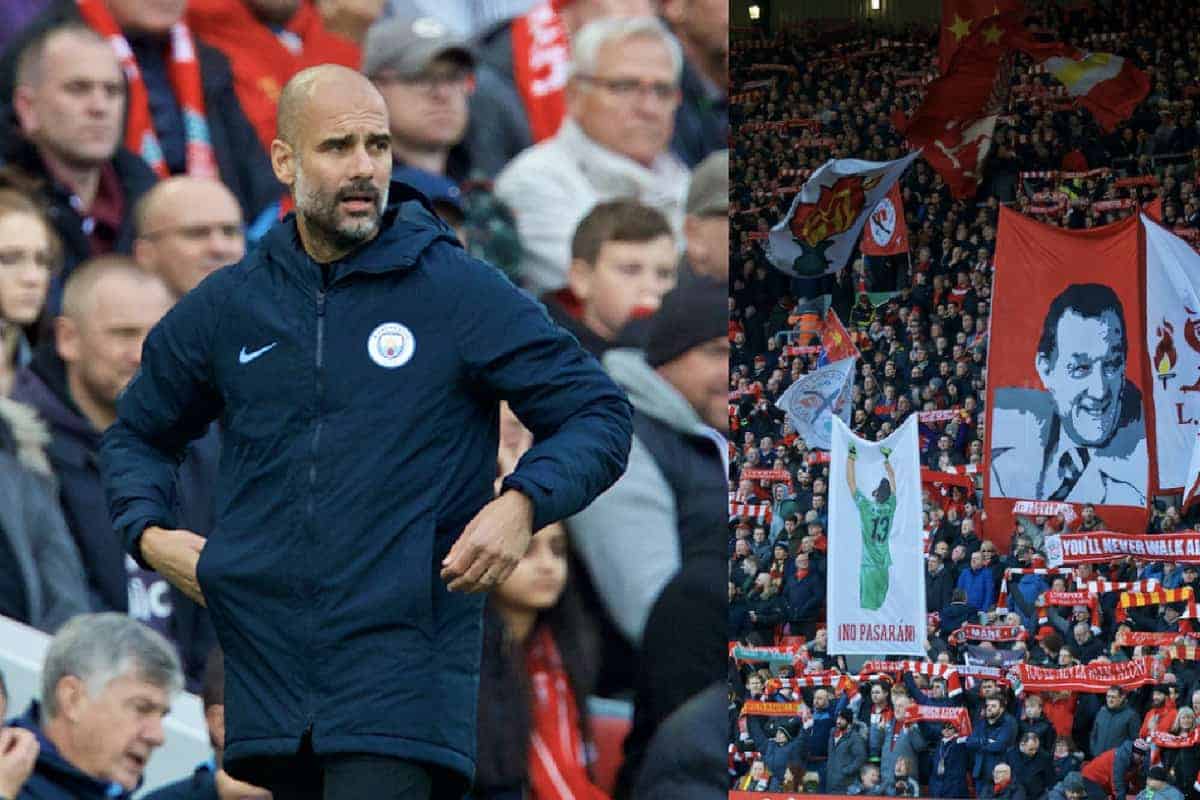 The Man City squad celebrated their Premier League title by chanting about Liverpool fans being “battered in the streets,” and it clearly crossed a line.

I was invited onto Radio Merseyside on Wednesday night—John Durnin, Nick Tanner and Ken who drinks in the Flat Iron and used to go to school with Chris Lawler’s cousin must have been unavailable—and host Paul Salt’s opening question was about a burning issue.

What do I think of the behaviour of Man City‘s players on their flight home from Brighton?

It said a lot that this was top of the agenda in a week when Liverpool had narrowly failed to win the Premier League with 97 points after only one defeat.

City’s players were undeniably unprofessional. There is no excuse for them singing that Allez, Allez, Allez song whatsoever. None at all.

As unlikely as it seems, City fans do have some songs that aren’t about Liverpool, so why not sing Blue Moon, We Are City or even something by their Bootleg Beatles mate Noel Gallagher instead?

A team of professional footballers singing about supporters of another club being “battered in the streets” or a rival player being injured a la “Ramos/Kompany injured Salah” crosses a line.

And that’s without the loaded “victims of it all,” another reference to the entrenched Mancunian ‘Victimpool’ slur that goes far beyond football, but is used slyly to try to provoke a response to aid their weird obsession with feeling the need to constantly prove a moral high-ground over Liverpool.

Of course the next stage is to wait for an angry response from Liverpudlians then trot out the tired old ‘offended by everything, ashamed of nothing’ line in their moral crusade to convince the rest of the world that they are better human beings than the people of Merseyside—something they can only achieve by trying to denigrate us instead of shouting about themselves.

I’m not sure how they think it comes across, but it gives the impression that Mancunians have an inferiority complex about Liverpool, something that does a vibrant, diverse city no favours at all.

Man City‘s official statement that “any suggestion the lyrics relate to Sean Cox or the Hillsborough tragedy is entirely without foundation,” only compounded the mess.

They were essentially saying ‘it’s about other fans getting battered so that’s perfectly fine’, which must have made interesting reading for their 32-year-old supporter who was put into a medically induced coma after being ‘battered’ in the streets of Gelsenkirchen in March.

“The word ‘victims’, sung as a sneer at a match, does not just voice a cold lack of empathy for the victims of Hillsborough and their families,” wrote City fan and esteemed journalist David Conn in the Guardian.

“It is also aimed at doubting their genuineness as victims, which has been deeply hurtful given the 30-year justice process, with legal proceedings still continuing.”

By effectively legitimising a chant that is open to interpretation, City have opened the door for more of the same.

Say Bayern Munich knocked Man United out of the Champions League (when they’re back in it in 2034/35) in the midweek before a Manchester derby at Old Trafford. Would it be OK for City fans to sing Munich, Munich because any suggestion it relates to the 1958 Munich disaster would be entirely without foundation?

Football fans will always be football fans. Songs that wind up rivals is all part of the culture. I was at Maine Road in 1992/93 when City fans were handing out ‘help us get Peter Swales out and Franny Lee in’ leaflets before kickoff.

By half-time there had been a few incidents on the pitch and the Kippax were singing “you Scouse bastards” and we were singing “there’s only one Peter Swales.”

Even the classless Wolves fans were singing “Raheem Sterling, he’s top of the league” at Anfield on Sunday to try to wind us all up—that’s how football is and always will be.

But there’s a line that shouldn’t be crossed. Singing about tragedies such as Munich (which Liverpool and City fans have both been guilty of in the past) or Heysel or Hillsborough or anything of the same ilk crosses that line for supporters.

And singing about fans being “battered in the streets” most definitely crosses that line when you’re a professional footballer.

I massively respect Pep Guardiola. He’s not only the most successful manager currently in football, he’s also a good guy who knows how close you can come to being inadvertently caught up in tragic events.

"I'm sorry, I apologise. That was never our intention"

Guardiola’s wife and two daughters were at the Ariana Grande concert on May 22, 2017 when a bomb was detonated, killing 22 people and injuring hundreds of others.

Thankfully for the Guardiola family they were all OK, but can you imagine the outcry and offence it would cause if supporter or footballers from another club sang about that event?

So why is it OK for City players to sing a song that is interpreted by so many to reference both Sean Cox and Hillsborough, despite the denials?

It isn’t, and as far as I’m concerned it needs a strong, classy manager like Guardiola to come out and say so by apologising properly, because as it stands the behaviour of his players and staff on that flight has tarnished the achievements of him and his brilliant team.

Chris McLoughlin writes for This Is Anfield each week; he’s also senior writer for the Official LFC Matchday Programme and LFC Magazine. If you missed last weekend’s Wolves programme you can buy it here.