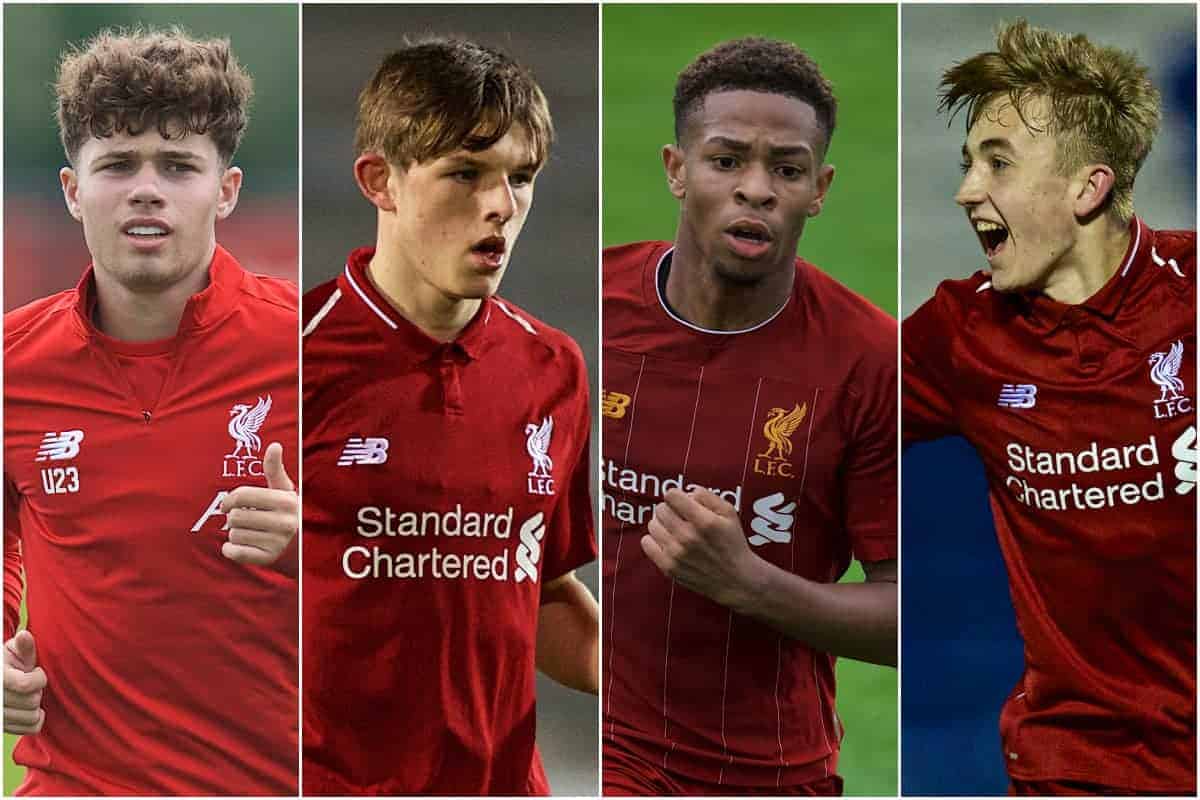 Liverpool found great success on and off the pitch with their academy sides last season, and another crop of youngsters could make an impression in 2019/20.

An FA Youth Cup, a close-fought title challenge and a strong contingent making strides at first-team level has made the past year a standout one for the Reds’ academy.

Such is the ever-changing nature of senior football, and Jurgen Klopp‘s desire to promote youth, Neil Critchley and Barry Lewtas have headed into the new campaign with new-look squads.

So who should supporters look out for at under-23s and under-18s level in the season ahead?

To avoid going over the same ground, our list omits the likes of Ki-Jana Hoever, Yasser Larouci, Curtis Jones, Bobby Duncan and Paul Glatzel, who may turn out for academy sides this term, but are already well-known.

Here are 10 other Liverpool academy players worth keeping an eye on in 2019/20.

Set to be a fixture for the U18s this season, Koumetio literally stands head and shoulders above the rest of his team-mates.

Though he doesn’t turn 17 until November, the January signing from US Orleans—heading into his first campaign with the young Reds after receiving international clearance—is already built like a first-team centre-back.

The early signs are that he is able to complement that stature—which sees him loom over fellow defenders Remi Savage and Jarell Quansah—with a composed, front-footed approach and impressive pace on the recovery.

Koumetio, who operates on the left side of the central pairing, initially emerged in the Lyon academy, and is regarded in his native France as a top prospect.

Wales under-19s right-back Williams has been a regular in the Reds’ academy sides for the past three seasons, but after a reasonable campaign last time out, should be looking to step up in 2019/20.

He got off to the perfect start with a brilliant goal in the under-21s’ 3-2 defeat to Oldham Athletic in the EFL Trophy, showcasing his ability in the attacking third.

That competition could be vital for the teenager, with experience against senior sides providing him the opportunity to prove he can join the likes of Hoever and Larouci as full-back candidates for Klopp in the long term.

Williams can certainly improve his all-round game, but if he is given the game time with the U23s he could make big strides this season.

Dixon-Bonner has experienced an up-and-down two years since breaking through as part of Steven Gerrard’s U18s at the beginning of 2017/18.

The ex-Arsenal midfielder became a regular with the U23s in the second half of that campaign, performing excellently in a deep-lying role, before moving back down to the U18s last season.

Under Lewtas, he was often deployed in a more advanced role, and on a number of occasions out wide on the left, and he no doubt benefited as he showcased his versatility.

He now looks set to take up a focal role under Critchley with the U23s this time out, and with his intelligent and passing ability he could be a very important player.

In some ways, it is a surprise to see Clarkson retained as part of Lewtas’ squad this season.

The young midfielder was one of the standouts of the successful U18s side of 2018/19, with his creativity from the No. 6 role central to the likes of Glatzel and Duncan thriving.

But now stationed as one of the leaders of Lewtas’ youthful squad he can develop his game further; he has worn the armband so far, which is a considerable marker of his maturity.

Clarkson can pick a pass both long and short, possesses a fine awareness and ability to find space and is a real threat from set-pieces, and should be one of the U18s’ key players once again.

Ritaccio looks set to follow the trajectory of Dixon-Bonner this season, and after making just 22 appearances—and only 11 starts—in his first campaign after arriving from BW Gottschee, could be a go-to for the U18s this season.

The American was typically fielded as a deep-lying midfielder upon making the move from New York, but is now fulfilling a more attacking duty.

Speaking in June, Ritaccio admitted it took time to adapt to the speed and physicality of the English game.

And after a season learning the ropes he could enjoy a breakout 2019/20.

Varesanovic (pictured right) has been a Liverpool player since 2017, but this campaign will be his first playing for the academy on a competitive level.

A skilful, left-footed attacking midfielder, the Bosnian was also attracting interest from Barcelona prior to his £43,000 switch from FK Sarajevo, but opted to make the move to Kirkby.

Though he received international clearance at the beginning of last season, Varesanovic failed to make a single appearance for the U18s or U23s, but is now considered part of Critchley’s squad.

The 18-year-old has noticeably bulked up in recent months, and his progress is certainly worth looking out for in 2019/20.

Only Duncan (16) created more goals for the academy sides than Cain (13) in 2018/19, and like Clarkson he could have warranted a step up to the U23s this season.

Instead, he will continue his rise—with time very much on his side—as another senior figure in Lewtas’ squad, and a blistering start to the campaign—including four goals in pre-season—suggests he could go up a level.

A blossoming attacking midfielder, Cain has excellent close control, is able to pick locks in the opponents’ defence and is developing a great knack for getting on the end of goalscoring opportunities.

He is likely to share set-piece duties with Clarkson, and could well assume a leadership role alongside his close friend too.

Signed from Man City, Liverpool have very high hopes for Balagizi, and he made his mark early with a brace in the U18s’ 7-1 opening-day victory over Blackburn.

Though initially an attacking midfielder, the lofty teenager is set to adapt his role as one of Lewtas’ centre-forwards this season, filling the void left by the prolific Glatzel and Duncan.

Balagizi seems to be a very direct, flexible attacker able to float around the 18-yard box, and is already showing signs of a fruitful partnership with Layton Stewart.

Stewart is widely heralded as the next jewel in the Kirkby academy crown, who takes the No. 9 shirt for the U18s this season.

The youngster has already produced a variety of impressive finishes in the opening weeks of the campaign, including an acrobatic volley to clinch a late victory over Stoke on his home debut:

… and what a strike it was ??? pic.twitter.com/wE5AWcPxgh

Despite his age, Stewart has already filled out well, with his height and physicality, combined with his movement and predatory instinct, suggesting he could be the next star to emerge from Lewtas’ ranks.

Bearne joined from Notts County in 2016, as the Reds took advantage of their financial crisis to secure a hotly tipped prospect, with the teenager welcomed to the club by Kenny Dalglish.

He made his U18s debut under Gerrard, but is yet to fully establish himself as a regular starter—largely due to the form of Glatzel, Duncan and, to a lesser extent, Fidel O’Rourke last season.

But Bearne did step up with some crucial goals, including a last-minute winner in the U18s’ 4-3 Merseyside derby triumph in November, and clearly impressed coaches with his application.

Owing to a shift in the ranks, Bearne looks set to be fast-tracked to the U23s this season, and his versatility—as a winger, No. 10 or in his best role up front—could see him make his mark under Critchley.