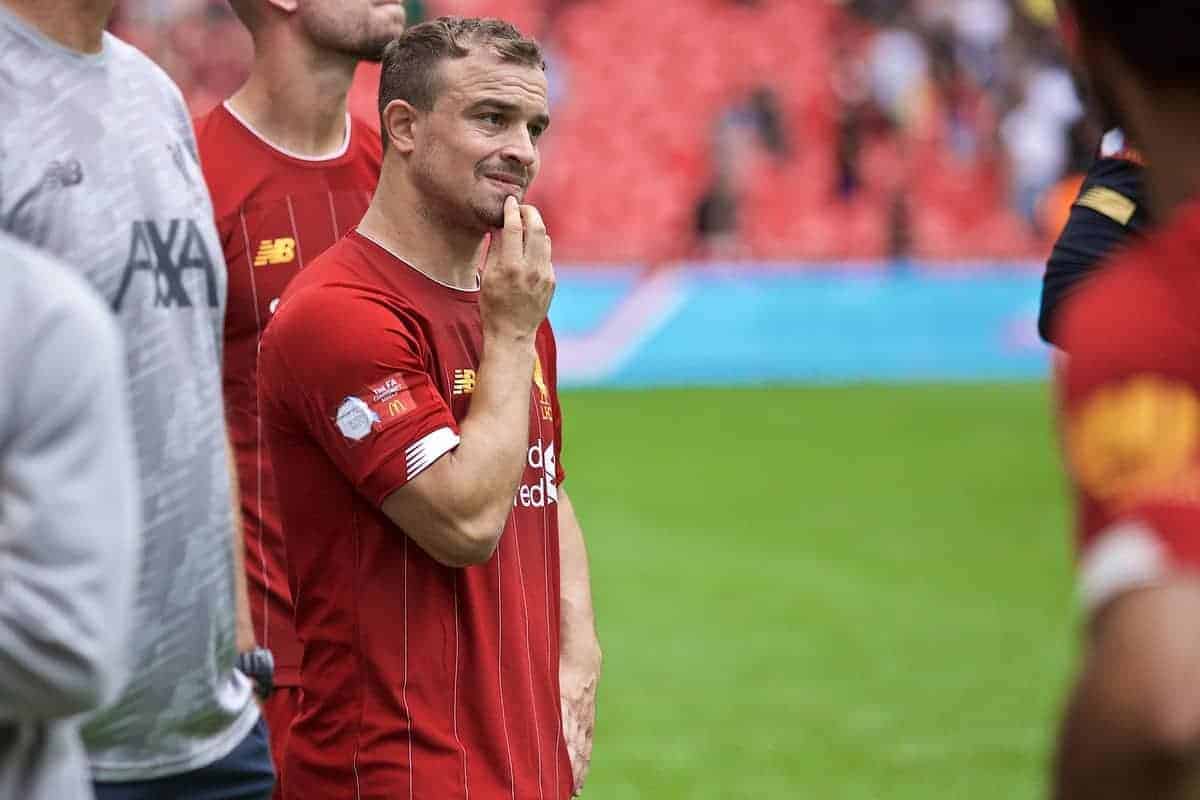 Xherdan Shaqiri is “ready for the moment” he is needed as Liverpool prepare to rotate in the coming months, with Jurgen Klopp reassuring the winger of his role.

Four games into the season and Shaqiri is yet to feature for the Reds, having been an unused substitute in all three Premier League fixtures and the UEFA Super Cup.

There has been muted speculation over the No. 23’s future on Merseyside, though there has been no indication he would leave the club before September 2.

Instead, Klopp has been consistent that the start to the campaign is not the best period for rotation, and asked specifically about Shaqiri’s application and how he can work his way into the side, the manager stressed Liverpool “need him.”

“Shaq is training well, that’s the situation, The first four weeks of the season, that’s how it is,” he explained.

“That’s probably the hardest period for players who are not [starting].

“He had an injury, [then went] to Evian as well, like Naby did. Naby got a re-injury, thank god Shaq didn’t get that. That’s the only situation.

“In training, Shaq doesn’t have to improve in any way, he can keep the level he is doing in the moment. It’s not about that.

“Of course he can improve, how everybody can improve, but it’s not about that, he doesn’t have to show anything special.

“Is he the happiest player in the squad at the moment? I don’t think so. Can I see that on the training pitch? No.

Klopp has utilised the same small group of players so far this season, but after the September international break the Reds will head into the Champions League and the League Cup.

This, along with their ongoing league endeavours, means Klopp is planning to make alterations, but for Saturday’s trip to Burnley he is only considering “a couple of really small changes.”

“We need them all, 100 percent. That’s the first part of the season, the first four weeks around about, or at least four Premier League games,” he continued.

“We had a busier schedule than other teams but still not that busy during the weeks.

“No reason for resting players in the moment, it’s about finding rhythm, finding the mood again so we do the right things in the right moment.

“So it’s the moment for a lot of changes. But after this international break that will change, of course, completely.

“But in the moment the defensive setup or whatever, as always, is about the best shape.

“We had a full week to train and when the boys showed me that, [after] we won the last game, they are still in their best possible shape, then we will only think about a couple of really small changes.

“But of course, they are all around and that’s good.

“No decision is made forever in football, we always make the decisions for one match and then the next is waiting, usually.

“In this time they go all around the world and after that we need them all. They know that, so that’s why the mood in the dressing room is pretty good.”